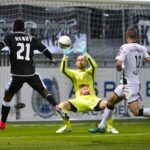 Nigerian prodigy Henry Onyekuru can hardly wait to celebrate his 20th birthday come June 5 and dreams of having Super Eagles resounding victory against South Africa come June 10 as the icing on the cake.

The revelation of the season in Belgium for newly promoted Eupen, has been named in Coach Gernot Rohr’s squad to confront Bafana Bafana in Uyo, even as the list of clubs hoping to sign him ahead the new season keeps rising by the day.

His 12 goals in 28 regular season matches followed by another 11 goals in 10 games during the play-offs for Europa spot, has made him center of attention.

Onyekuru who dreams of playing for Arsenal, has former Gunners’ great Henry Thierry, as his idol which is why he prefers to have only his first name ‘Henry’ at the back of his shirt and is hoping to ultimately follow Thierry Henry’s footsteps when he eventually settles at the Emirates.

Interestingly some analysts have noted that Onyekuru’s style is similar to that of Thierry Henry.

The Nigerian claims that centre-forward is his best position but he’s frequently used on the left wing.

Some coaches he has worked with believe his dribbling skill is phenomenal while some are rather tickled by his precision while running at defenders at full speed.

For some other analysts however, Onyekuru is still very inexperienced at a high level, as he is yet to make his international debut for Nigeria and can’t be fully judged by his efforts against mediocre opposition in Belgium.

But all that looks set to change within a few hours with strong indications that he will be handed playing opportunity against Hawks on Thursday in a friendly and then to the big one against South Africa. And with reports that Arsenal has agreed terms with Eupen, all that is needed is for him to agree personal terms to signal possible rise in career profile

While Thursday’s friendly against Hawks of Togo will provide Eagles an opportunity to blend properly, the June 10 show down will offer Onyekuru and an opportunity to show what makes him tick,  in the hope that his effort  and that of the his teammates  will earn the much needed victory  to serve as garnishing to his 20th birthday .