On the edge of a bleak pandemic winter, Freeland offers a vague plan for recovery 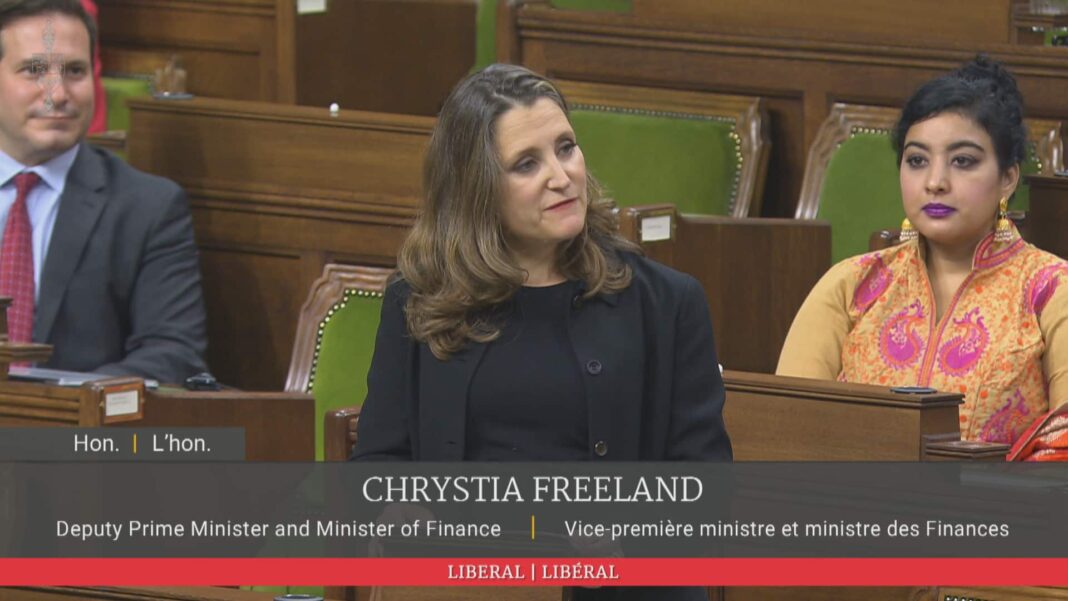 The central metaphor of Chrystia Freeland’s speech to the House of Commons on Monday was seasonal.

“We know the winter ahead will be hard,” the finance minister said. “But we also know that spring will follow winter.”

As a reference to the pandemic, this can be taken quite literally. The second wave of COVID-19 is still building, Canadians are suffering and significant hardship is still on the way as the weather turns cold. Eventually, things will get better. Brighter days are ahead.

In terms of fiscal policy, Freeland’s fall economic statement was an attempt both to account for the long winter of our pandemic discontent and to hold out some hope. With that eye to the spring, Monday’s fiscal update sets up a pivotal budget next year — one that, whether it passes or fails, could be among the most consequential in this country’s recent history.

To counter the pandemic, Freeland now predicts that the federal government will have to spend $267.3 billion in the current fiscal year to support individuals, businesses and provinces. Another $45.9 billion in aid could be required in the next fiscal year. Before any stimulus to restart the economy is spent, Freeland said, the debt-to-GDP ratio would peak at 52.6 per cent.

Even with the vast sums involved, there have been relatively few concrete complaints to date about the scope of the government’s pandemic spending. The debate going forward is more likely to be about how the government’s accumulated debt should influence its future actions — though even Conservative leader Erin O’Toole has said he would take another ten years to balance the budget.

Looking forward, Freeland said the federal government will be prepared to spend between $70 billion and $100 billion over the next three fiscal years to pull the country out of the pandemic-induced recession. But the vast majority of that stimulus — as well as any new permanent spending — will be detailed at a later date. 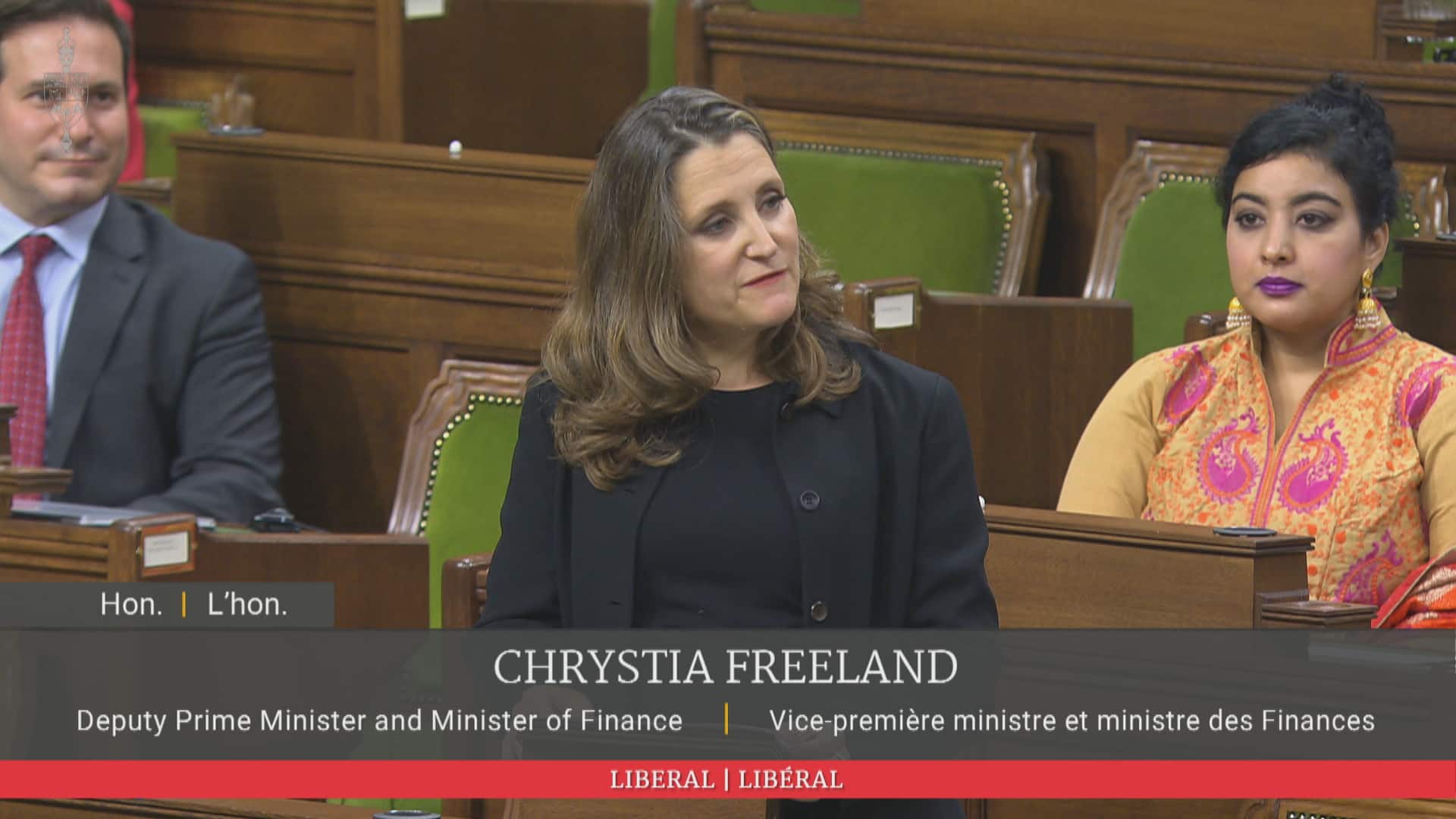 Monday’s fall economic statement lays out some broad priorities, all of which were at least hinted at in September’s throne speech: creating new opportunities for women, expanding access to early learning and child care, fighting systemic racism, making it easier to find affordable housing, increasing immigration, continuing the pursuit of reconciliation and building a cleaner, greener economy. And this fiscal update does offer a number of “down payments” on new plans to deal with those concerns.

In all, the fall economic statement projects about $15 billion in new spending over the next five years under the heading of “building back better,” alongside a smattering of tax changes expected eventually to provide about $2 billion in new annual revenue.

To the consternation of fans of “fiscal anchors” — a concept that has exploded in popularity over the last nine months — Freeland’s update stops short of explaining how federal spending will theoretically be tied down in the long-term.

Instead, there are comparisons to debt and stimulus spending by other G7 countries and a promise of “fiscal guardrails” to judge how much stimulus spending is needed and for how long. There is also a preemptive argument against moving too quickly to return the budget to balance.

“The experience of many countries following the 2008-09 global financial crisis … suggests that economies that withdrew fiscal support too quickly experienced slower growth afterwards,” the update reads at page 99 — a sentence that could be read as a reference to the post-recession policies of the previous Conservative government.

COVID-19’s second wave in Canada, and the prospect of a difficult winter ahead, necessarily complicate any plans to launch that stimulus or begin building for the long-term.

Details coming in the spring

But there are big things that remain to be explained, such as how much new funding the Liberals might be willing to provide to the provinces for health care — an issue that could involve specific commitments for pharmacare and long-term care. On child care, Freeland vowed that next year’s budget will “lay out the plan to provide affordable, accessible, inclusive and high-quality child care from coast to coast to coast.”

Liberals can argue that they have identified the things that the federal government should be focused on now — that such an agenda reflects both the lessons of the pandemic and the needs of the future. But it has yet to explain how those pieces might fit together on the federal balance sheet.

In his response to the fiscal update, Conservative leader Erin O’Toole mostly sidestepped the specifics. He repeated his party’s claim that Canada can expect to get access to a COVID-19 vaccine later than many other nations — a prediction that soon will be either borne out or dismissed. Of the larger debate, he mostly spoke of values.

He enthused about “hard work” and “perseverance” and mentioned that his first job in high school had been as a dishwasher and short-order cook. He accused the prime minister of being “paternalistic” toward the provinces. He borrowed Stephen Harper’s preferred framing to argue that there is now a fundamental conflict of visions between the “somewheres” and the “anywheres.”

Those might be powerful emotional arguments for some audiences, particularly when deployed against a famous and cosmopolitan prime minister whose support is based in major cities. But while it’s not at all clear how the Trudeau government will make “building back better” work in practice, it’s even less clear what O’Toole’s alternative agenda would look like — what he would offer the “somewheres” and whether he’ll have counter-proposals to what the Liberals eventually offer.

By spring, we could have clearer pictures of both the state of the pandemic and the Liberal government’s post-pandemic agenda. A new Liberal climate plan, for instance, could come before the end of this year.

As a result, a lot will be riding on next spring’s budget — from a stimulus agenda defined by Liberal priorities to another promise of a national child care system. This being a minority government, the fate of this promised plan for a post-pandemic spring will depend on whether it can win the necessary votes in Parliament — or, failing that, a general election.