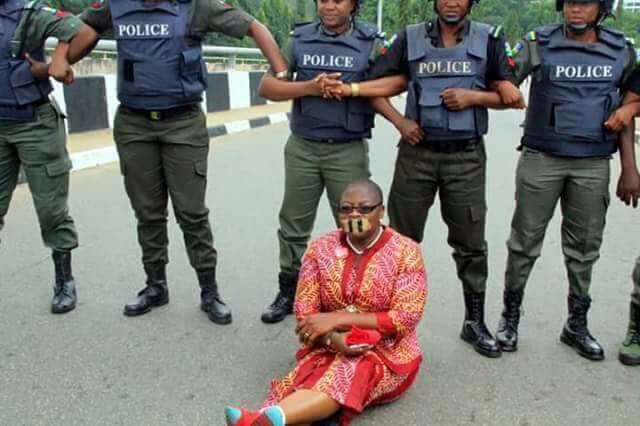 Oby Ezekwesili How Police arrested BBOG convener, 15 others in Abuja

The ex-minister and other BBOG members were prevented from commencing their planned march to the Villa.

Oby Ezekwesili, the convener of the Bring Back Our Girls (BBOG) advocacy group was arrested by officers of the Nigeria Police Force (NPF) on Tuesday, January 23, 2018.

Ezekwesili and some other demonstrators began the BBOG movement in 2014 to demand the release of 276 schoolgirls who were kidnapped in Chibok, Borno State.

Together, the group has continued to pressure the President Muhammadu Buhari-led federal government to secure the release of the girls.

This, however, has not prevented the police from mounting roadblocks at the entrance to the Aso Rock Villa and obstructing members from a peaceful march.

Spokesperson of the BBOG, Sesugh Akume, had earlier announced that the group would resume its march to the Villa today.

“Our #BBOGMarchToTheVilla series for January ’18 commence tomorrow, Unity Fountain, 9 am,” he said.

This did not go down well with the federal government.

Members of the BBOG who arrived the popular Unity Fountain, takeoff venue for the march to the Villa, met a group of anti-riot Police officers.

The BBOG members were prevented from commencing their planned march to the Villa.

“President Muhammadu Buhari, members of our BBOG Movement HAVE BEEN ARRESTED BY OUR IG of Police. WE ARE ALL WAITING TO BE ARRESTED SINCE it has become an OFFENSE to DEMAND THAT YOU KEEP YOUR PROMISE TO RESCUE ALL OUR CHIBOKGIRLS,” Ezekwesili tweeted.

A source told Pulse that a Police van appeared and whisked them away to an unknown destination.

While speaking to Pulse on Tuesday, co-convener of the advocacy group, Aisha Yesufu, said the Police did not give any reason for their arrest.

“We are at the FCT command,” Yesufu said angrily.

“The Police arrested us and we are here right now and they are not allowing us to go. They have not told us the reason for our arrest but they are not telling us anything.

“They just arrested us because they can and they have kept us here like criminals. We’re between 15 and 20 members here and there’s no reason so far,” she declared.

Ezekwesili, a former Education minister, recently began a #RedCardMovement, a campaign aimed at ending the rule of the political class in Nigeria