Oakville couple says house sale at risk due to tenants that refuse to leave, Landlord and Tenant Board delays 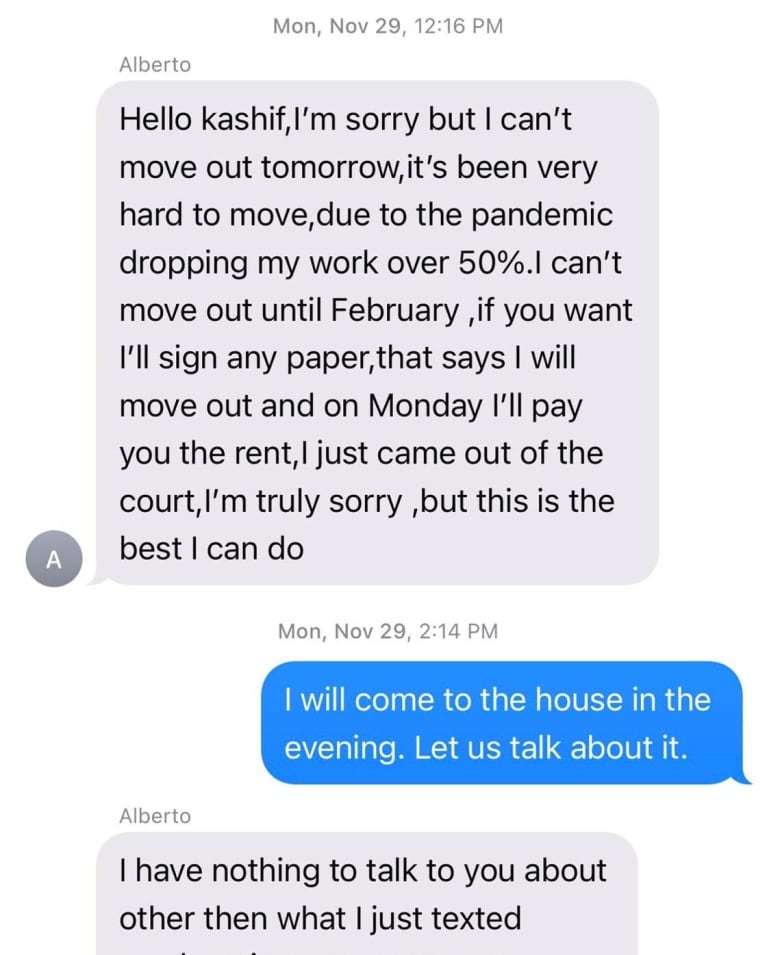 An Oakville, Ont., couple say they are caught in a nightmare scenario because the people living in the downstairs apartment of their Mississauga investment home refuse to leave more than six months after they sold it — and there’s little they can do.

Kashif and Salma Siddiqui say they stopped receiving rent payments for the unit in October, meaning they are owed $10,200 while bearing the costs of two homes as they wait for the case to be adjudicated at a backlogged Landlord and Tenant Board (LTB).

And while the new buyers have agreed to push back the sale closing date twice, they are now threatening to sue if they don’t get control of the detached home on Tacc Dr. in a vacant state by April 30.

The dilemma highlights ongoing issues with the LTB, which is plagued by a monthslong backlog of cases that’s causing major delays in the adjudication of landlord-tenant disputes.

According to the lease agreement, the Siddiquis rented the basement apartment in December 2020 to Alberto Almeda and his former wife for $1,700 per month.

Last summer, the Siddiquis decided to sell the home. They say they verbally informed both their upstairs and downstairs tenants in July of their intention to list it and, in August, signed a sales agreement with a closing date of Dec. 15.

According to documents filed with the LTB, the Siddiquis provided written N12 notice to the tenants on Sept. 22, and set the move-out deadline as Nov. 30.

An N12 is a form a landlord is required to issue to tenants under Ontario’s Residential and Tenancies Act when they intend to have either themselves, a relative or a purchaser move into a rental unit. It requires a minimum of 60-days notice.

The upstairs tenants left at the end of October, and Almeda — who the Siddiquis say has been the main occupant of the apartment along with several members of his family since he and his former wife broke up — said he would vacate by the end of November.

“Until 29th of November, they were telling me that they will move out,” said Kashif Siddiqui. “Then one day before, they just told me that they are not going to.”

Since then, the Siddiquis allege Almeda has been verbally abusive, has damaged their property, including the washing machine, and hasn’t paid any rent. Pre-dated cheques provided by his former wife at the beginning of the tenancy bounced because the bank “cannot trace” the account, financial documents show.

When contacted by CBC News, the woman said she left the apartment in July after divorcing Almeda, and directed questions about its occupancy and unpaid rent to him.

In phone and text message conversations, Almeda didn’t directly answer questions and declined to be interviewed.

According to two text message exchanges between Almeda and Kashif Siddiqui from April and November 2021 viewed by CBC News, Almeda claimed he was having difficulty finding a new place to live due to COVID-19 concerns and the impact of the pandemic on his employment.

“I find it very, very hard to believe,” said Kashif. “They have had sufficient time.”

No LTB hearing scheduled after 3 months

The Siddiquis filed an application with the LTB on Nov. 22 to evict Almeda and the other downstairs occupants, and submitted a separate eviction application in December for non-payment of rent, documents show.

No hearing has been scheduled almost four months after the initial filing.

“I am frustrated with the system because I feel helpless,” said Salma.

The situation could drag out for months and even more than a year, said Boubacar Bah, chair of the advocacy group Small Ownership Landlords of Ontario (SOLO).

“What you’re describing here is something that happens very often to small landlords because they are not sophisticated,” Bah said. “If the tenant doesn’t move out, you can’t force him.”

Under Ontario’s Residential and Tenancies Act, the quasi-judicial LTB is the only body with the authority to order a tenant be evicted. Tenants have the legal right to continue to live in their rental units, even if they stop paying rent, until their case is heard and an eviction order is issued.

A court enforcement officer known as a sheriff has the power to enforce the LTB order and carry out the eviction.

The problem for both landlords and renters, according to paralegal Harry Fine, is that the LTB isn’t functioning properly. Wait times for hearings and decisions have ballooned since a five-month shut down at the start of the pandemic caused a backlog of cases that Fine says even a record number of adjudicators can’t get through.

“To say the LTB is a train wreck isn’t quite being fair to wrecked trains,” said Fine, who previously sat as an adjudicator at the board.

The LTB didn’t provide answers to questions by the time of publication.

To say the [Landlord Tenant Board] is a trainwreck isn’t quite being fair to wrecked trains.– Harry Fine, paralegal

The repercussions of the LTB backup can be grave.

Fine said the Siddiquis — who have been sent several letters threatening legal action from the lawyers of the people they sold the home to — could be sued by the buyers if their sales agreement is cancelled and they buy a more expensive house.

“I speak to small landlords every day who call me in tears, practically, who are about to get sued by a purchaser in aborted sales,” said Fine.

Landlords with investment properties should always seek advice from legal professionals with experience handling landlord-tenant issues before listing their tenanted homes, he said.