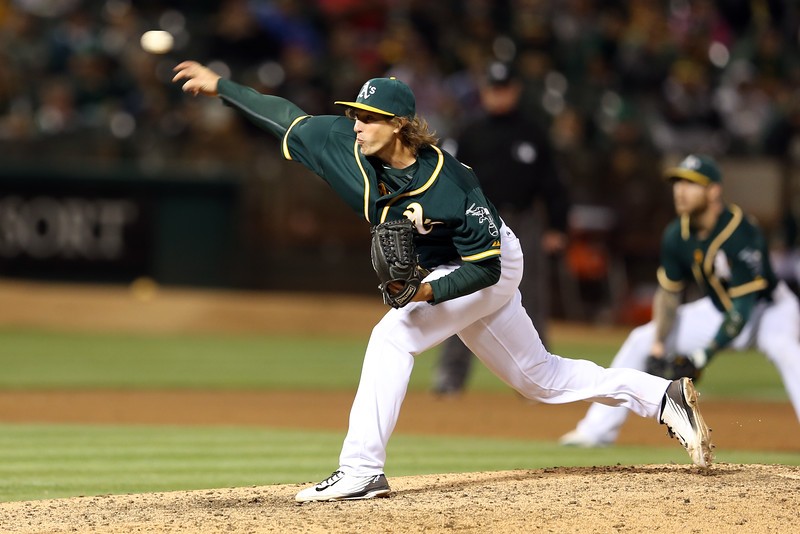 The Oakland A’s activated reliever Ryan Dull from the disabled list, the team announced Wednesday. The right-hander had been out for two months with a knee injury. To make room on the roster, John Axford was designated for assignment. In addition, catcher Josh Phegley was placed on the 10-day disabled list, with Ryan Lavarnway coming up to replace him.

Dull had an excellent rookie season in 2016 but was off to a poor start this year before landing on the DL. He wasn’t able to recreate his low hit rate, and his pinpoint control was off as well — nine walks in 15⅔ innings, after totaling 15 last year in five times as many frames. Before he got a chance to work out of those doldrums, he strained his knee and then hit the shelf on May 20.

Entering the year, Dull was a top late-inning option and even in the mix for some saves. If he can bounce back and show that 2016 was his true form then Oakland will have received a huge boost in a suddenly depleted bullpen.

Meanwhile, Axford was let go amid what has been a lost season. The veteran right-hander opened on the disabled list and never really got going upon his return. This was the final year of his contract and he doesn’t have any trade value, so he would have been a free agent this winter anyway. In an odd coincidence, Dull going on the DL in May was the corresponding move for Axford being activated; now they pass each other once more in the opposite direction.

Moving on to the catching position, Josh Phegley is out with a strained oblique. After being scratched from Wednesday’s game, the injury continued to worsen, reports Susan Slusser of the S.F. Chronicle. This is his second DL stint of the season, after missing a week to a concussion in May. He was also limited to just 26 games last year because of injuries.

This will be Lavarnway’s second stint with the A’s this year. He made a brief appearance earlier in July when Phegley went on paternity leave; he went 0-for-2 in his only game. He takes Axford’s spot on the 40-man roster. Of course, Bruce Maxwell remains as the team’s primary catcher.

This is the 21st time the A’s have used the DL this year, and the 16th since Opening Day.

In other injury news, RHP Chris Bassitt (Tommy John surgery) was activated from the 60-day DL on Tuesday, the team announced. He was immediately optioned to Triple-A, where he will continue tuning up for a chance to crack the A’s bullpen. He’s been scoreless in his last three rehab outings, totaling 4⅔ innings (4 Ks, 1 BB).

To make room for Bassitt on the 40-man roster, fellow RHP Bobby Wahl (shoulder) was transferred from the 10-day DL to the 60-day. Despite this fact, Wahl is actually already on his own rehab assignment in the minors and has made it back up to Triple-A as well. He originally went on the DL on May 24.

Meanwhile, RHP Jharel Cotton (blister) made his second rehab start for Nashville on Tuesday. His final line: 6 ip, 0 runs, 9 Ks, 1 BB, 2 hits. Fellow RHP Kendall Graveman (shoulder) has also made a pair of Triple-A rehab starts, but not with the sparkling results Cotton enjoyed. Finally, UT Chad Pinder (hamstring) has played six games on rehab in Nashville — I’ve labeled him as a utilityman here because he’s started at 2B, SS, and CF in the last week.