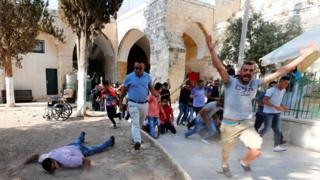 Palestinians have returned to a key holy site in Jerusalem for the first time in two weeks after Israel removed controversial security apparatus.

The measures were introduced by Israel after the killing of two Israeli policemen nearby.

The last pieces were removed on Thursday after days of violence in which seven people were killed.

Palestinians had fiercely objected to the new security set-up, seeing it as an Israeli attempt to exert control over the Old City complex known to Muslims as Haram al-Sharif and to Jews as the Temple Mount.

There have been intensive diplomatic efforts to resolve the crisis, involving by the US and Jordan, which is custodian of the holy site and has a large Palestinian population.

The Israeli government has not yet commented on its decision to completely dismantle the infrastructure. Observers say it is a climbdown by Prime Minister Netanyahu, which will put him at odds with more right-wing members of his cabinet.

Education Minister Naftali Bennett, a political rival to Mr Netanyahu and whose party is part of the ruling coalition, criticised the decision.

The issue of control in East Jerusalem, occupied by Israel in the 1967 Middle East war, is one of the most contentious areas of dispute with the Palestinians.

Israel claims sovereignty over the whole of Jerusalem, though this is not recognised by the international community. Palestinians claim East Jerusalem as the capital of a sought-after state.

“The al-Jazeera network continues to stir violence around the Temple Mount,” he posted in Hebrew on his Facebook page, vowing to “enact the required legislation to expel al-Jazeera from Israel”.

Palestinians sang, danced and let off fireworks as railings and security camera gantries were removed from the Lions’ Gate entrance near the Temple Mount/Haram al-Sharif in the early hours of Thursday morning.

“For 12 days no-one has slept, no-one has done anything except the al-Aqsa mosque,” bystander Firas Abasi told AFP news agency.

He said he felt like crying over what he called a “victory”.

Mass prayer gatherings had been held in the street outside the Old City walls and near-daily clashes between Israeli security forces and demonstrators have taken place since the metal detectors were introduced in the wake of the killings of the policemen near the site on 14 July.

Four Palestinians were killed and three Israeli civilians stabbed to death by a Palestinian who said he was avenging Israel actions at the site.

Israel said the security measures were necessary because the weapons used to kill the police had been smuggled on to the compound.

Earlier this week, it vowed to bolster its police presence around the site and introduce less obtrusive security measures over the next six months, including unspecified “advanced technologies”.