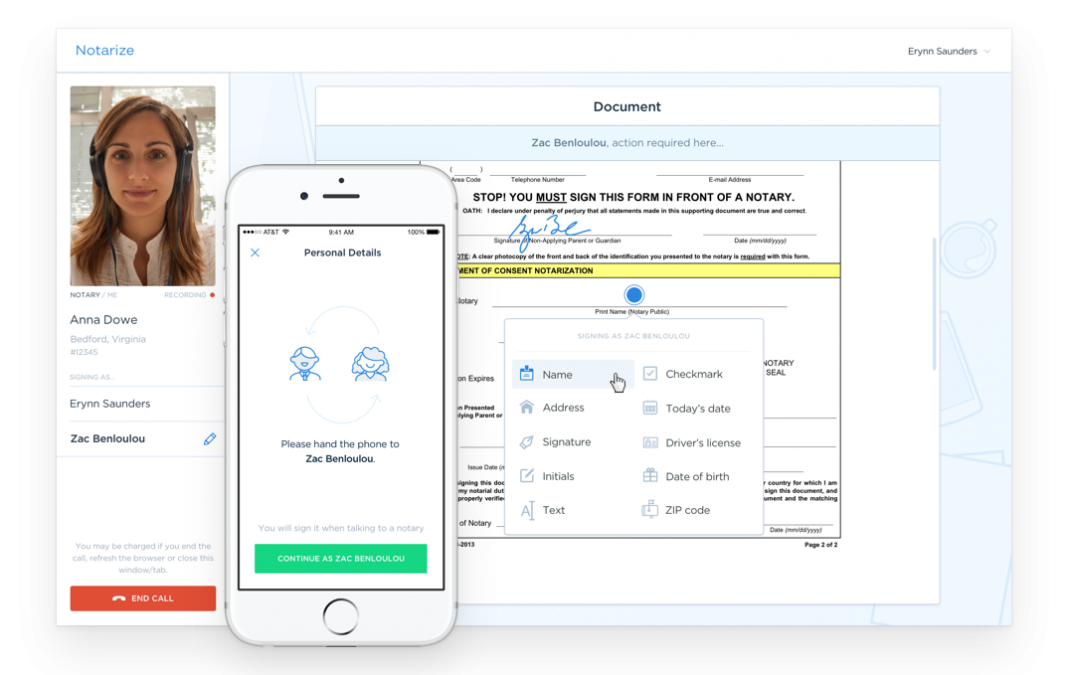 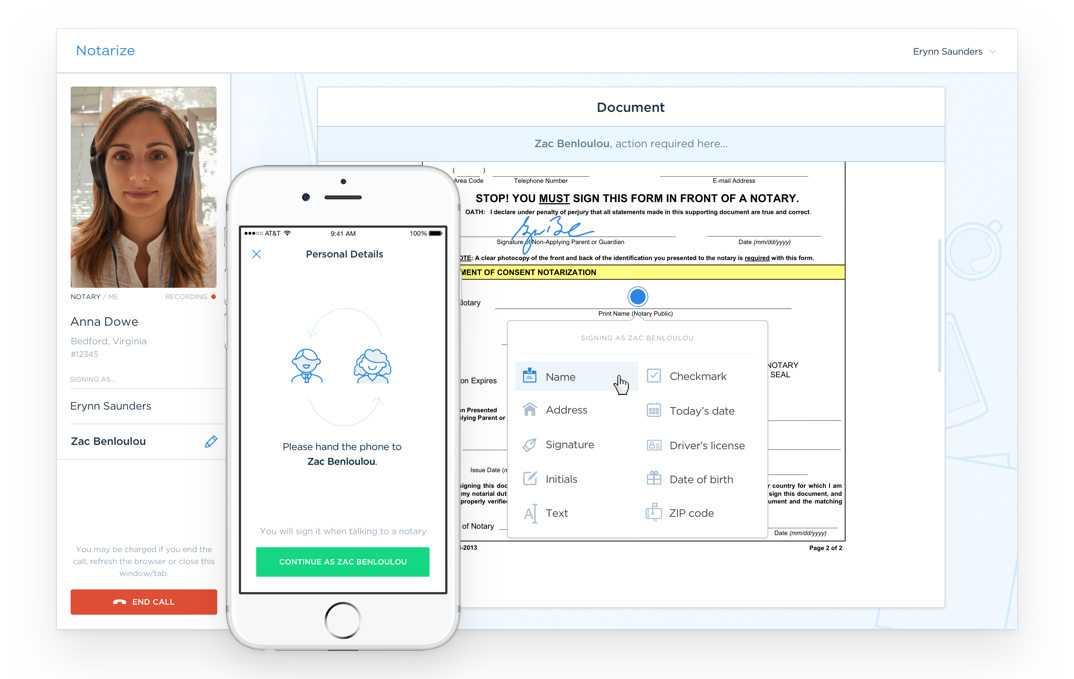 Notarize is one of the apps and websites that connect people to a notary who can notarize documents remotely. Courtesy of Notarize hide caption

Notarize is one of the apps and websites that connect people to a notary who can notarize documents remotely.

Every year, hundreds of millions of documents are notarized in the United States: wills, mortgages, citizenship forms, handgun applications. And since the founding of this nation, notarizations have been done pretty much the same way: in person.

Now, new technology and new laws are making it possible to skip the sometimes-arduous search for the notary stamp in favor of a video chat — though some concerns about digitization have divided the notary industry.

“I don’t think people realize how important of a part of the economy notarization is,” says Adam Pase, co-founder of Notarize, one of the companies that remotely connects signers and notaries. “Despite the fact that there are so many [notarizations], the industry really hasn’t changed much in literally centuries. It certainly hasn’t kept up with the digital economy.”

The idea of on-demand, virtual notarizations first became possible when Virginia enacted a remote notarization law in 2012. In June, Texas became the largest state to follow. Digital-notary apps and sites have been popping up: DocVerify, NotaryCam, Safedocs, SIGNiX.

The process is pretty straightforward: You upload a document to an app or website and get connected with a notary by video, on a split screen; you verify your identity by showing a government-issued photo ID, and the notary witnesses you signing your name on screen using your finger or mouse. Then, the notary adds their electronic signature and a digital version of a stamp or seal. The whole transaction is recorded and secured on the cloud in compliance with retention rules; both the signer and the notary can get copies.

Right now, even though notarization apps and sites are accessible by everyone, the participating notaries themselves are certified and based only in Virginia and Texas. Nevada will also join those states; it enacted a remote-notarization law on June 9.

But overall, America’s 4 million notaries are split on the idea.

“It’s the notary issue of the year,” says Bill Anderson, vice president of government affairs at the National Notary Association. “Allowing that appearance to take place via audio/video communication technology is certainly new and to some extent, untested. … We’re being cautious. But we are trying to accommodate those that think this is a good idea and to add some security to it.”

One of the main concerns has to do with identification. How can online notaries make sure you are who you say you are?

Under the Texas law, authentication involves a few steps: First, the notary runs your government-issued photo ID through a third-party verification system that can confirm the document’s authenticity. Then, the user has to answer so-called knowledge-based questions, the kind you might get asked if you’ve lost your credit card: “Have you ever lived on Main Street?” or “What’s the name of the high school you attended?”

“If states want to enact this law they would do well to see what Texas has done in terms of security and identification,” Anderson says.

The other worry for webcam notarization is around coercion. Lorraine Pereverziev, a lawyer and mobile notary in Santa Barbara, fears people could be pressured into signing documents — like spousal agreements or wills — by someone out of the video-camera range.

“How can we know for certain,” she says, “that there isn’t someone beyond the camera’s view holding a gun, whether literally or figuratively, to the signer’s head to induce them to move forward with the signing?”

Pase, with the company Notarize, says the notary could ask the signer to show their surroundings. But Pereverziev doubts a coerced signer would do so.

The one aspect of webcam notarization Pereverziev does like is the ability to save audio and video recordings. That kind of accountability is part of the reason why major mortgage companies such as Fannie Mae, Freddie Mac and Quicken Loans are supporting online notarization.

Even though the cost of remote notarizations is a bit higher — in Texas, one webcam session is $25 compared to $6 per document in person — the idea has taken off. Pase estimates that Notarize has facilitated some 10,000 notarizations for people on every continent except Antarctica.

Digitally notarized documents are valid across state lines thanks to the Full Faith and Credit Clause of the U.S. Constitution; however, Anderson says it is possible for a state to enact a law calling into question that recognition. So far, he says he doesn’t know of any states that haven’t accepted a webcam notarization, but the state of Iowa has a law saying notarizations performed in other states will only be recognized if the individual appears physically before the notary.

Of course, there will always be those who prefer to get their documents notarized in person, if only to hear the old-school stamp of approval.

Lauren Silverman covers health, science and technology for member station KERA. You can follow her @silverwoman.