Reader Question: Do I Tell if I Find Out My Friend Had an Affair? 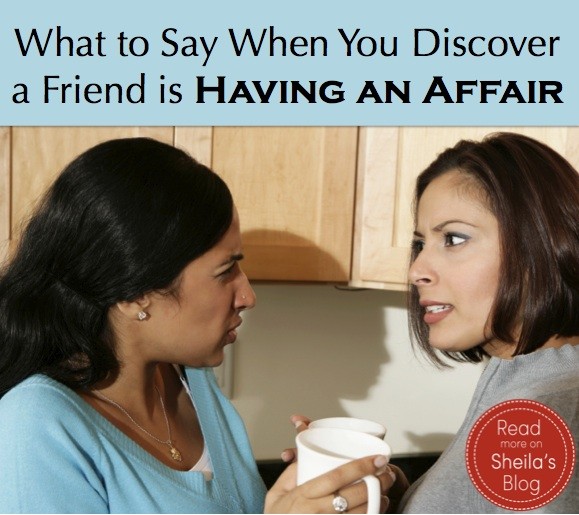 Do you tell on a friend if you find out she had an affair?

Every Monday I like to post a reader question, and today’s is a biggie: so a friend had an affair, and it’s gotten really complicated. Do you tell her family?

I’m honestly not sure how to answer this one, so I’m going to post it, leave a few thoughts, and then let you all have a go at it in the comments!

I have a friend who recently confessed that she had been in an affair  years ago. Some relatives suspect this and occasionally (like whenever they get mad at her) accuse her of being unfaithful. So at times she has had to blatantly lie and say she’s never done anything of the sort. Her kids suspect too. They even suspect who it is. Correctly. If it comes up around her husband, his response is “I don’t want to think about it.” That tells me he suspects too… Then I found out that the last time was only four years ago. And that he still texts her and when she doesn’t text or call back, he will call the business.

I feel like she should just come clean with her husband. She says that if the ex wants to call and tell everything she’s willing to deal with that and so she has stopped responding to him, come what may. But I still feel like he’s got power over her as long as she’s trying to hide. To further complicate things, she is not sure who the father of one of her children is. And the ex thinks it’s his, and has recently started communicating with the now teen boy. I guess the ex is a relative of a relative so not totally strange that he might communicate, but given  the circumstances it seems dangerous. She says she and her husband are very sexually active, but she still struggles with a negative body image so won’t let him see all of her…the ex really did a number on telling her how “dirty” she is. So, how do you help a friend who has had an affair years ago, called it quits and done nothing since then and has a happy marriage now. Leave it alone? Or dredge up the past for the sake of honesty?

So what would I suggest?

Should you tell on a friend who had an affair? Criteria to decide!Click To Tweet

Honestly, if we were only looking at the first three things, I’d say leave it. I don’t like secrets, but in this case it seems as if the husband already knows, or at least strongly suspects, and is willingly being blind about it. That’s his choice. If he suspects but doesn’t want to pursue it, then blowing everything out in the open can hurt everyone tremendously.

If the husband had no clue, then my answer may be different. I may suggest seriously counselling the friend to confess, but perhaps in the presence of a counsellor or other third party who could help weather the inevitable anger.

Now, if the affair was ongoing, then I do believe that you have a responsibility to tell the husband, even if your friend won’t. But if it’s in the past, I don’t feel the same way.

HOWEVER–and this is where it gets tricky.

When an affair affects the children, it’s a whole new ball game.

In this case, the ex-lover thinks the boy is his son–and the boy may honestly be his son.

I believe that every child has a right to know where they came from.

Secrets hurt children, even secrets that are not even known to exist (for instance, the boy may not know that his mother had an affair, but because everyone is keeping that secret, it affects how they relate to the boy, and that in turn hurts him.)

Kids pick up on secrets. They just do.

And if this man continues to insinuate his way into her son’s life, that can be very dangerous.

What would I do? I think I’d help your friend surreptitiously get a DNA test. It’s not that hard to do. Find out if the boy is the husband’s or not. If it’s the husband’s, then tell the ex to get lost.

If it turns out that the boy is the ex-lover’s, then I think the secret has to come out in the open, and you may have to work on your friend to help her get ready to confess.

But it won’t be pretty. I know a young woman who found out at 16 that her father was not her biological father, because her mother had had an affair. She went through a lot over the next few years as she tried to process that. It was terrible.

And that’s the problem, isn’t it? Our sins affect our children, sometimes in very profound ways.

If there is a secret that needs to be told, then again, I’d seek counselling first and I’d try to tell that secret with the counsellor’s help. I’d also advise your friend to let the parents of the son’s best friends know about the situation so that they can be there for him, even if it were humiliating the wife. I’d let any mentors that the son had in on the secret, too, so that they can counsel the son well and so that he saw that his mother was taking this seriously and was not trying to protect her reputation, but was honestly only concerned about her son.

And what about the husband’s devastation? Well, that’s a big mess, too. And it could get really ugly.

But I still think a child has the right to know.

I think in these situations that we try to find the least messy option, because it looks like if it all blows up, it will be terrible.

So that would be my answer:

So, please, people, think twice before you have an affair. It’s always messy. Always.

Now, what would be your answer? Would you tell on a friend who had an affair? Have you ever had to go through this? What was the fall out?

Marriage isn’t supposed to be blah!

Sex is supposed to be stupendous–physically, emotionally, AND spiritually.If it’s not, get The Good Girl’s Guide to Great Sex–and find out what you’ve been missing.