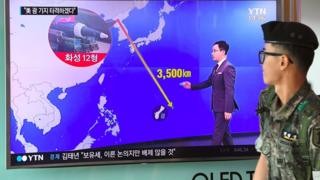 North Korea says it will be ready by mid-August to fire four missiles near the US territory of Guam, as a war of words with Washington intensifies.

State media said Hwasong-12 rockets would pass over Japan and land in the sea about 30km (17 miles) from Guam, if the plan was approved by Kim Jong-un.

Warnings of “fire and fury” from Donald Trump were denounced, and the US leader was described as “bereft of reason”.

The US has warned the North its actions could mean the “end of its regime”.

US Defence Secretary Jim Mattis said Pyongyang would be “grossly overmatched” in any war against the US and its allies.

The North first announced on Wednesday that it was planning a missile strike against Guam, which is home to US military bases, strategic bombers and about 163,000 people.

A later statement said the military would “finally complete the plan” by mid-August and report it to leader Kim Jong-un for his approval.

It called President Trump’s remarks on Tuesday that the North risked “fire and fury” as “a load of nonsense”.

“Sound dialogue is not possible with such a guy bereft of reason and only absolute force can work on him,” it added.

Amid escalating rhetoric, Mr Mattis issued a strongly worded statement on Wednesday, called on Pyongyang to halt its arms programme.

“The DPRK [Democratic People’s Republic of Korea] must choose to stop isolating itself and stand down its pursuit of nuclear weapons,” he said.

“While our state department is making every effort to resolve this global threat through diplomatic means, it must be noted that the combined allied militaries now possess the most precise, rehearsed and robust defensive and offensive capabilities on Earth.”

Tweeting from New Jersey where he is on holiday, the president said the US nuclear stockpile was “more powerful than ever before”.

Meanwhile, US Secretary of State Rex Tillerson has sought to reassure Americans that North Korea does not pose an imminent threat.

Speaking in Guam, he said he was hopeful a global “pressure campaign” involving Russia and China could lead to new dialogue with Pyongyang “about a different future”.

Mr Tillerson said the situation had not dramatically changed over the past few days, and that Americans “should sleep well at night”.

China has urged calm, describing the situation as “complex and sensitive”.

On Tuesday, a media report in the US claimed the North had achieved its goal of making a nuclear warhead small enough to fit inside its missiles.

However, most analysts doubt the country would launch a suicidal pre-emptive attack on the US.

North Korea remains technically in a state of war with the US and South Korea after the 1950-53 conflict on the peninsula ended in a truce.