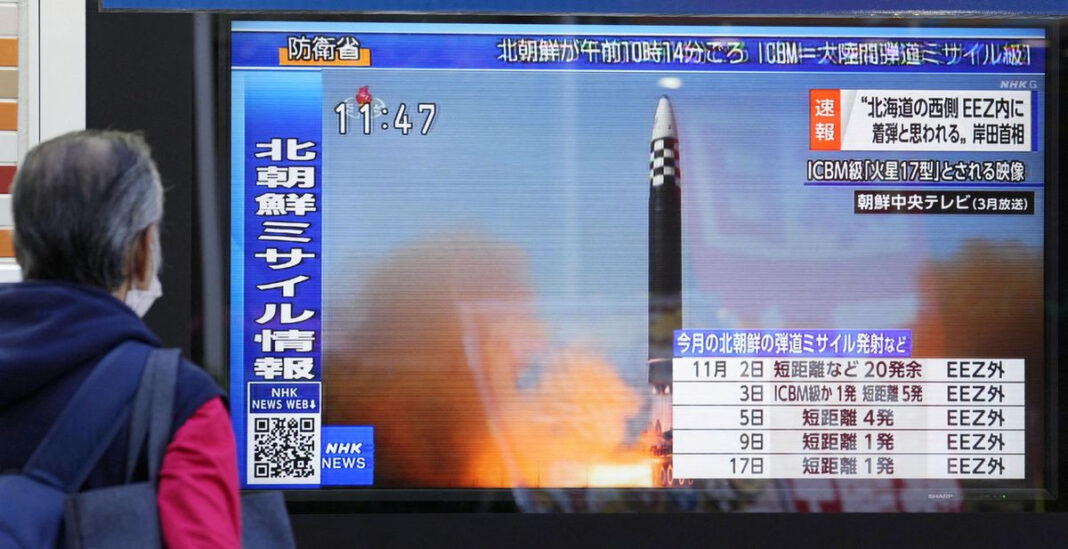 North Korea test-fired an intercontinental ballistic missile (ICBM) on Friday November 18, that Japanese officials claim had sufficient range to reach the mainland of the United States and that landed just 200 kilometres (130 miles) off Japan.

The launch, reported by both South Korean and Japanese officials, comes a day after a smaller missile launch by the North and its warning of “fiercer military responses” if the U.S. boosts its security presence in Asia.

U.S. Vice President, Kamala Harris and leaders of Japan, South Korea, Canada, Australia and New Zealand condemned the launch at an emergency meeting called on the sidelines of the Asia-Pacific Economic Cooperation (APEC) summit on Friday.

“We strongly condemn these actions and we again call for North Korea to stop further unlawful, destabilizing acts,” Harris said during the meeting, convened to discuss the launch.

The South Korean military said that, in response to Friday’s launch, South Korean F-35A fighters and U.S. F-16 jets flew in formation off the east coast of the Korean Peninsula and conducted a firing drill against targets that simulated North Korea’s mobile missile launchers.

Friday’s launch adds to a record-breaking year for North Korea’s missile program, after it resumed testing ICBMs for the first time since 2017 and broke its self-imposed moratorium on long-range launches as denuclearisation talks stalled.

North Korea’s stepped-up development and testing of missiles also indicate that it has faced few hurdles in obtaining the technology and materials it needs for its missile program despite its dire poverty and sanctions by the United Nations.

Japanese Defence Minister Yasukazu Hamada told reporters on Friday that the missile was capable of flying as far as 15,000 km, while Chief Cabinet Secretary Hirokazu Matsuno said it flew to an altitude of about 6,000 km with a range of 1,000 km, before landing in the sea roughly 200 kilometers west of Oshima-Oshima Island in Hokkaido.

South Korea’s military projected that the missile reached an altitude of 6,100 km and flew 1,000 km at a maximum speed of Mach 22.

North Korea often conducts its tests on such “lofted” trajectories where the missile flies much higher into space but to a shorter distance than it would if fired on a normal trajectory.