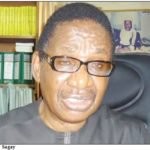 The National Judicial Council (NJC) Saturday rejected the accusation made against it by the Chairman, Presidential Advisory Committee Against Corruption (PACAC), Professor Itse Sagay that the Judiciary was not in support of the current administration’s anti-corruption war.

Insisted that its recent decision to recall the six judges suspended in the wake of  their investigation for corruption allegation by the Department of State Services (DSS),was in order.

The NJC said in a statement that  the Judiciary was infull  support of the administration’s efforts to curb corrupt practices in the country and would  continue to do so within the ambit of the law.

The council’s  Director of  Information, Soji Oye,who signed the statement also dismissed claim by the Special Assistant to the President on Prosecution, Okoi Obono-Obla that the Federal Government has appealed the acquittal of Justice Adeniyi Ademola of the Federal High Court.

It said investigation by its officials revealed that there was no valid appeal filed yet against the April 5 ruling by Justice Jude Okeke of the High Court of the Federal Capital Territory (FCT) acquitting Justice Ademola, his wife and a lawyer, Joe Agi (SAN).

Justice Okeke had, in the ruling, upheld the no-case submission by Justice Ademola and his co-defendants, charged with corruption related offences.

The NJC expressed regret that the Executive was not cooperating with the Judiciary in cases of judges that have been recommended for either sack or compulsory retirement.

The NJC said: ‘’contrary to the allegations by Professor Itse Sagay, (SAN), Chairman, PACAC, that Judiciary took a hasty decision to recall the Judges, and that it is not on board with anti-graft war of the Federal Government, the number of judicial officers that have been removed from office for misconduct particularly for corrupt practices since President Buhari administration came on board, that has been made public by NJC in October and November, 2016, speaks for itself in that vein.

“Some of the judicial officers were removed from office by dismissal or compulsory retirement by the President or Governors on the recommendation of the National Judicial Council.

“While a number of the judicial officers were reprimanded by Council in the exercise of its Constitutional powers to exercise disciplinary control over judges of superior courts of record in the Federation.’’

It claimed that  some of the judicial officers  it  recommended for dismissal or compulsory retirement from office by the presidency or Governors, have not to date been removed from office.

It added:”But for suspension of the affected judicial officers from office by NJC, they would have to date been still performing their Judicial duties.

“And these are officers that have been found culpable of gross misconduct by National Judicial Council after due process and diligent fact finding investigation by Council based on the Rule of Law enshrined in the 1999 Constitution of Federal Republic of Nigeria, as amended, NJC Judicial Discipline Regulations and Code of Conduct for Judicial Officers of the Federal Republic of Nigeria.

“The NJC will soon issue an advertorial on the foregoing and list out the number of judicial officers that have since April, 2000 when it held its inaugural meeting to date, been dismissed or compulsorily retired by the President or Governors for gross misconduct or corrupt practices, on its recommendation; and also reprimanded by council by suspension or warning/caution.

“Council is not oblivious of the fact that some major stakeholders in the Judiciary and justice delivery sector in conjunction with the Nigerian Bar Association, met with the Honourable Attorney-General of the Federation and anti-graft and security agencies before the judicial officers were recalled, to discuss the subject matter and in particular the fate of the judicial officers that have not been charged and arraigned.

“It is to be stressed that our criminal justice is also predicated on accusatorial system and not inquisitorial.

“Thus, every accused person is presumed to be innocent until his guilt is proved beyond reasonable doubt by the prosecution.

On Obono-Obla’s statement  that the Attorney-General of the Federation filed a notice of appeal against the ruling of  Justice Jude Okeke discharging and acquitting Justice  Ademola and 2 ORS on 7th April, 2017,the council said  the registry of the High Court of the FCT, Abuja, informed the Department of Information of the NJC that the AGF office filed two Notices of Appeal in the Court; the first one on 7th April, 2017, against Justice  Ademola, his wife, and  Agi, while the
second one was filed on 6th of June, 2017, two days after the press release was issued by the NJC, with additional grounds of appeal against only Ademola.

“It is on record that when the parties were invited by High Court of the FCT for settlement of records to be transmitted to the Court of Appeal on 18th April, 2017, the Appellant failed to turn up,’’ the NJC said.