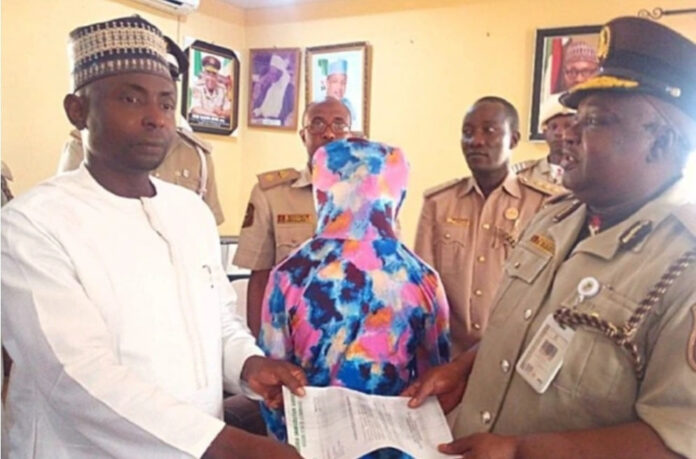 The Nigeria Immigration Service (NIS) has handed over to NAPTIP, a 17-year-old girl from Oyo State arrested in Kebbi allegedly on her way to Libya.

The girl was traveling alone when she was arrested by immigration personnel in Yauri Local Government Area of Kebbi.

The NIS Comptroller in the state, Mrs Rabi Bashir-Nuhu, made this known while briefing newsmen in Birnin Kebbi.

She said although the girl said she was travelling to Sokoto, “we have the belief that she is being trafficked to Libya to be used for labour exploitation, prostitution, or organ harvesting.”

Bashir-Nuhu explained that the girl was intercepted at Yauri border on Nov. 26, unaccompanied, thereby raising suspicion about her movement.

Also read: BTS K-Pop Star Jin To Be Deployed To A ‘Frontline Military Unit’ When He Begins His MandatoryÂ Service On DecemberÂ 13

According to her, the girl said she was sent by her mother to meet one Zainab in Sokoto, who, how-ever, claimed to be sick when invited to the NIS office in Kebbi.

“This made us to believe that the girl was a victim of trafficking; she has no document, has noth-ing and not even a penny,” Bashir-Nuhu added.

The comptroller said it was disheartening that in spite of warnings by NIS and its partners, parents still allowed their children to undertake such perilous journeys.

After receiving the victim, the state Commandant, the National Agency for the Prohibition of Trafficking in Persons (NAPTIP), Alhaji Misbahu Iyya-Kaura, said the agency would

Also read: Sometimes My Employers Insult Me But I Ignore – Kenyan Woman Working As Househelp In Saudi Arabia Speaks After Building Houses

He commended NIS for collaborating with the agency to tackle human trafficking in Nigeria.