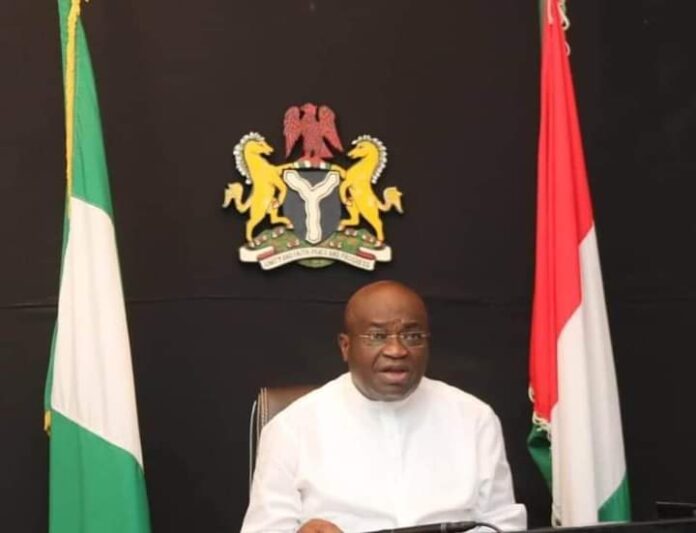 Abia State Governor, Okezie Ikpeazu, has condemned in strong terms the attack on police station and killing of policemen on Tuesday, by hoodlums under guise of protest against police brutality on the citizenry.

Governor Ikpeazu also revealed that the government has diligently ensured the arrest and prosecution of all officers who have been involved in highhandedness on citizens.

He advised for restraint and maturity on the part of the agitators while assuring them that the Abia State Government does not support the attack of innocent peaceful protesters.

Ikpeazu who stated this in his address during statewide broadcast on the recent violence that erupted during the End SARS protest held in the State on Monday and Tuesday.

He however, reiterated his government’s resolve to ensure the nurturing of an enabling environment for citizens to express their fundamental human rights while also assuring that government was fully committed to ensuring that Abia state does not descend into anarchy and lawlessness.

Parts of his Broadcast address stated, “It has, however, become obvious that the legitimate protesters have been unable to control the spread of the protest and have allowed it to degenerate into civil disobedience which has been hijacked by criminal elements as a means to foment trouble, endanger lives and damage public property.

“A situation where a Policeman will be killed, Police stations attacked and burnt down with other harm to government infrastructure, is sadly outside the realm of acceptable conducts in the cause of a protest. Citizens have become apprehensive with clear and present danger to the lives of Ndi Abia and no responsible Government will sit back and allow this state of affairs to continue.

“Over the last 5 years, we have managed to keep Abia State very peaceful through the instrumentality of security agencies working in concert with Government and the citizenry and we intend to take all legitimate steps to safeguard the peace and security of the State and its inhabitants.

“We are not unmindful of the fact that some people are not happy with the peaceful atmosphere in the state and will seek any available means to foment trouble for their nefarious and political ends but we will continue to frustrate their efforts at every turn.

As a response to the initial demands of the protesters, we have set up a Judicial Panel of Inquiry chaired by the former Chief Judge of Abia State, Hon. Justice S.N. Imo with 70% of the membership made up of youths and those familiar with the situation. We are awaiting their report and I pledge to work with relevant agencies to ensure full implementation.

“In addition to the above, let me assure our people that we are prepared to accept, and in appropriate cases, grant audience physically to all those who wish to bring forward documented cases of Police brutality in Abia State. Once we get indications from such persons, we shall open our doors and listen directly, provided such persons undertake to behave decently and responsibly. We commit to presenting these documented cases at the highest level in the country.

“Let me also place it on record that the Abia State Government did not and has no intention to order the arrest of any peaceful protester and any report to the contrary should be discountenanced.

“I wish to emphasize that no sitting Governor controls the rule of engagement of security agents but we shall ensure that all allegations of high handedness by security agents will be investigated by the judicial panel. But we encourage our people not to confront armed security agents as doing so might lead to unfortunate outcomes.

“I have just finished a Security Council Meeting with Service Commanders of all Security Formations in the State and all hands are on deck to keep the people of the State safe and ensure that there is no breakdown of law and order.

“As your Governor, exercising the mandate of security and protection of your lives, livelihoods and properties, I shall not allow our people to be cajoled, overwhelmed and intimidated in the course of their legitimate endeavours and I pledge to keep you all safe.

“I fully understand the issues that gave birth to the initial peaceful protests and share the pains of our people. But in protesting injustice, we should not allow injustice to be done to innocent citizens and institutions.

“As your Governor, I wish to call on all our youths to stand down now and allow us to do the needful to redress their grievances. I do not want any more Abia life to be lost and I am therefore appealing for calm and good sense. Nobody starts a fire in his mother’s kitchen and nobody cuts his nose to spite his face”.