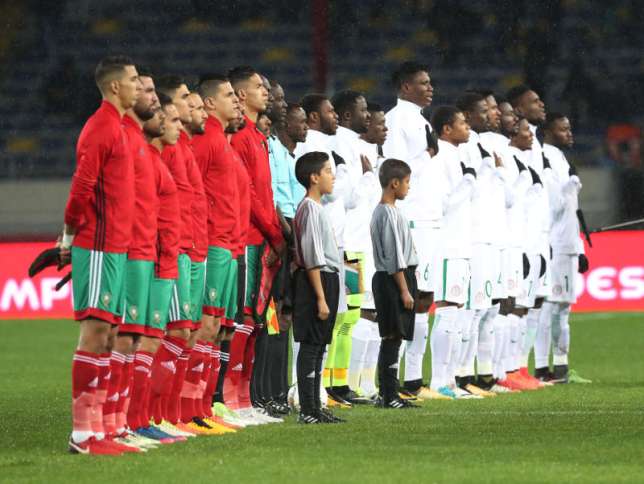 10-man Nigeria were thorn apart by host Morocco in the final of CHAN 2018.

The home-based Super Eagles of Nigeria were on Sunday, February 4 beaten 4-0 by host Morocco in the final of the African Nations Championship (CHAN).

Zakaria Hadraf netted a brace while Walid El Karti and Ayoub El Kaabi scored a goal each as the host beat Nigeria who ended with the 10 men in a packed Complexe Mohamed V in Casablanca.

The Super Eagles could not contain the Moroccans who were more mobile and rabid from the start.

The Atlas Lions were everywhere from the start, keeping the Super Eagles defence busy. El Kabbi got the first chance of the game, crashing the crossbar with an effort from a Hadraf cross.

He has earlier headed into the Nigerian net but the goal was ruled as the cross had passed the line.

It wasn’t until the 20th minute that Nigeria threatened the Moroccans as Gabriel Okechukwu tried to work the ball into the net from an Eneji Moses cross.

A dominant Morocco finally got their deserved opener through Hadraf who finished past Nigerian goalkeeper Dele Ajiboye from an Abdeljalil Jbira cross after good work from Badr Benoun went on a solo run beating two players.

It got worse for the Super Eagles just after the restart as Moses was sent off for a second yellow card after a foul on Hadraf.

With their one-man advantage, the host doubled their lead in the 61st minute through El Karti. An El Kaabi effort had hit the post and the rebound fell to Haddad who’s own shot was blocked by Ajiboye only for the loose ball to fall to El Karti to head home.

Two minutes later Hadraf completed his brace after tapping a Haddad cross into the net.

CHAM 2018 highest goalscorer El Kaabi got Morocco’s fourth to crow his impressive performance in the game.