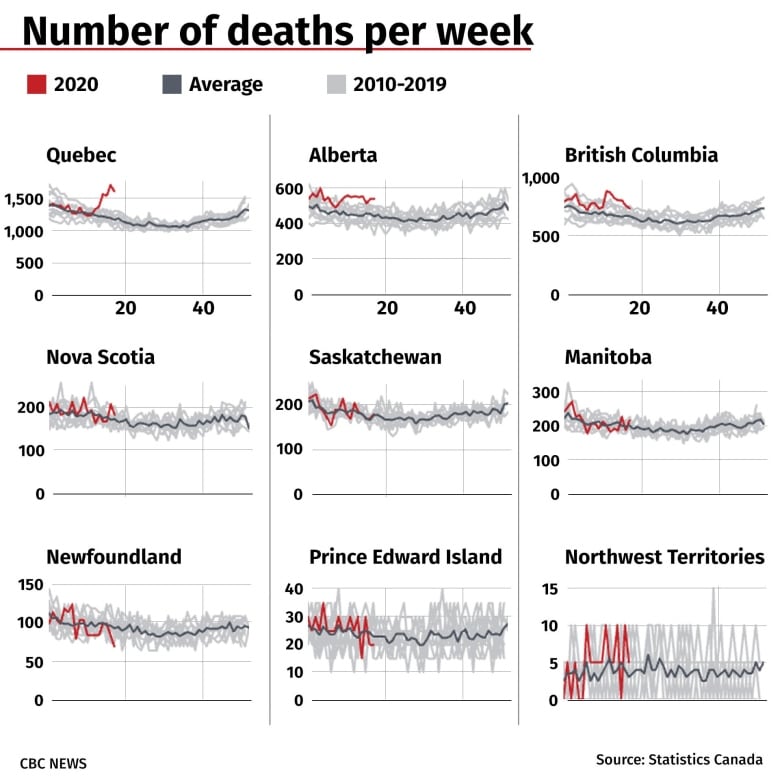 Hundreds more Canadians died in the early weeks of the pandemic than in the same period in previous years — but not all were directly connected to COVID-19, according to new figures released Friday by Statistics Canada.

The report compared weekly deaths from this year against the highest number of deaths for those same weeks over the past five years — looking for “excess deaths” that stood out from historical highs.

Between March 15 and April 25, British Columbia recorded 372 more deaths than in any of the previous five years for those same weeks — but just 99 of those were confirmed COVID-19 cases.

A similar trend was observed in Alberta. For seven weeks, death counts were consistently higher than the historical baseline — but only 40 out of the 402 additional deaths are connected to the coronavirus.

The excess deaths applied to both sexes and appeared to “disproportionately affect those over the age of 85,” said the report.

This suggests “other factors might be at play,” Owen Phillips, senior analyst with Statistics Canada’s vital statistics program, told CBC News. “Possibly variations in population structures or fluctuations in deaths from other causes.”

Similar studies in countries such as the U.S. and U.K. have also revealed hundreds, sometimes thousands of excess deaths amid the pandemic.

The report raises more questions than answers for Prabhat Jha, professor of epidemiology at the Dalla Lana School of Public Health at the University of Toronto.

“Are those missing COVID deaths? Are they heart attacks that went untreated and therefore died at home?” he said, noting preliminary studies that suggest patients are not getting essential care or going to the emergency room as much out of fear of contracting COVID-19.

“That will only be possible to determine with the cause of death, which I’m afraid is a few months away.”

Although statistics on COVID-19 deaths are updated daily, it typically takes Statistics Canada up to a year to gather data about other causes of death. The most recent data is from 2018.

The agency has told CBC it is hoping to release another analysis, looking specifically at the cause of deaths during the pandemic, in early July.

The data has gaps. Statistics from New Brunswick and Nunavut were considered “too incomplete” to be included. Figures for Ontario, the second hardest-hit province, and Yukon weren’t available.

Statistics Canada says that’s partly because death registration is still “a paper-based process” in eight of the 13 provinces and territories — including Ontario. The agency says it hasn’t received any death statistics from Yukon since 2017.

Jha says it is crucial for Canada to understand these excess deaths before a second wave of the pandemic, but says answers likely won’t come easily due to what he describes as an archaic and decentralized data collection process.

“The whole of Canada and the provinces should really move to get a real-time system. In the U.K., the data are released every two weeks, including the cause of death information so you can get into these details,” he said.

Statistics Canada says it’s aware its figures for Quebec are likely incomplete, but still sees a persistent trend of excess deaths higher than historical peaks for comparable weeks. It anticipates the figures will be better adjusted soon.

“Quebec data are the ones that I think are the most robust because they release them directly and they seem to show that almost all of the excess seems to be accounted for by COVID,” he said.