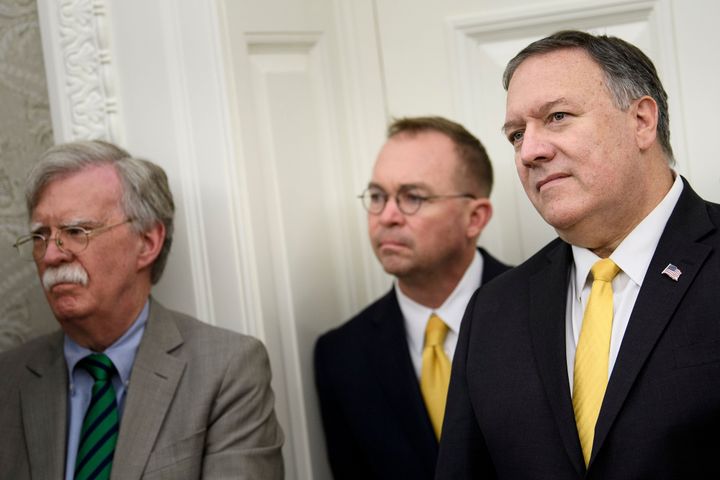 New Report Details Unrest Among Trump Officials As Trump Withheld Ukraine Aid, A new report meticulously details the unrest in President Donald Trump’s administration during the time Trump ordered military aid be withheld from Ukraine until the country carried out investigations that would benefit Trump personally.

On Sunday, the New York Times published a thorough account of the shock and consternation expressed by some officials who were ordered to carry out the scheme that ultimately led to Trump’s impeachment in December. The Times story brings together independent reporting ― including newly acquired emails ― and testimony from the House’s impeachment inquiry to depict a cleaved administration, in which some officials in various agencies helped Trump withhold aid from an ally in need and others expressed worry about the legality, morality and potential fallout of the effort.

In one instance, the Times wrote that Defense Secretary Mark Esper, Secretary of State Mike Pompeo and former National Security Adviser John Bolton unsuccessfully tried to convince Trump to release the aid in a frank conversation that took place in the Oval Office.

“This is in the interest of the country,” Bolton reportedly said, with Esper chiming in to convey the benefits that America derives from a strong Ukraine. But the Times said Trump was unmoved and continued to order officials in all three agencies to withhold the aid. Trump ultimately released the aid in September after news reports revealed that a whistleblower filed a complaint sounding the alarm.

The Times’ account also provides previously unknown details about the extent to which Trump’s chief of staff and head of the Office of Management and Budget, Mick Mulvaney, worked with a cadre of budget officials to withhold the aid; retain plausible deniability, and ultimately pass the blame for it to others in the administration when Congress and wary citizens began to scrutinize it more closely.

By late summer, top lawyers at OMB, who had previously coordinated with White House and Justice Department lawyers on withholding the aid, “were developing an argument — not previously divulged publicly — that Mr. Trump’s role as commander in chief would simply allow him to override Congress on the issue.”

For his part, Mulvaney allegedly sought to avoid conversations that could endanger himself or put Trump in a precarious legal position. According to the Times, “Mr. Mulvaney is said by associates to have stepped out of the room whenever Mr. Trump would talk with Mr. Giuliani to preserve Mr. Trump’s attorney-client privilege.”

But as the plan unraveled and the world got word of Trump’s efforts, Duffey tried to pass the buck, according to the Times, and attempted to cleanse himself and others involved of responsibility for withholding the aid.

Despite a months-long dispute with Elaine McCuster, the Pentagon’s top budget official, in which Duffey argued the aid could be withheld indefinitely, Duffey later wrote an email to McCuster blaming the Pentagon if the aid were to be delivered after the September deadline.

“You can’t be serious,” McCuster reportedly responded. “I am speechless.”