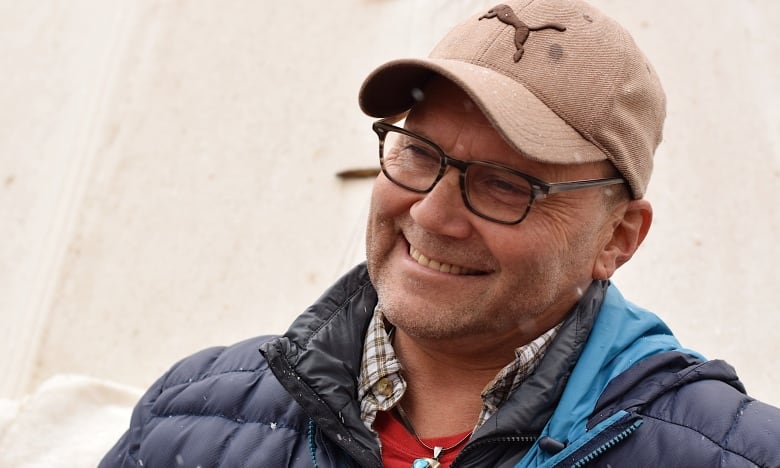 In a wooded area beside some farmland west of Waterloo, Ont., is Crow Shield Lodge.

It’s an Indigenous land-based education and healing space just outside New Hamburg. There’s a white tent — the teaching lodge — that can seat about 20 people. There’s a walled tent with a fire pit for gatherings. There’s a sweat lodge.

On this particular day, as snow flurries whipped around just on the other side of the trees, Clarence Cachagee led three other people in a smudging. He burned tobacco and sage in a small cast iron pan.

As a child growing up in Chapleau Cree First Nation in northern Ontario, Cachagee’s father called him Crow Shield “before I got my spirit name,” he said.

“My dad’s been gone over 25 years now, so I thought it would be nice if I could try to incorporate that name to honour my father and to honour our family,” he said.

The lodge is a place for healing, for the community to gather and learn from each other, Cachagee said.

He sees the lodge as a way to give back because he says there’s a great need for healing in the community. That includes local issues, like the removal of the Sir John A. Macdonald statue from in front of the Wilmot township offices, to potential burial sites being found at the sites of former residential schools and ongoing conflicts between local and federal governments.

Cachagee was taken from his family in the Sixties Scoop, when an estimated 20,000 Indigenous children were taken from their families and placed with white families. He lived with a New Order Mennonite family in Waterloo region, attended New Dundee Public School and Waterloo-Oxford District Secondary School.

The lodge was originally in Guelph, but Cachagee wanted to move it into Waterloo region and began to look for a space about a year ago. That was when he connected with Jennifer Pfenning, an organic farmer and Wilmot township councillor.

She offered him land for free for the lodge. They looked initially near the Nith River, but knowing it floods each spring, chose a spot in a wooded area.

There were briefly some issues with the township about whether the lodge was permitted under zoning bylaws, but staff were able to give the lodge the go-ahead.

Clarence Cachagee, founder of Crow Field Lodge near New Hamburg, Ont., talks about setting up the site this past spring and summer. 1:26

Pfenning said about a year ago, she had begun to think about how she could make a difference when it comes to reconciliation with local Indigenous communities and the idea of offering land made sense to her.

“We view our space as farmers in a stewardship capacity, not as ownership,” she said.

“As organic farmers that really underpins our philosophy of how we go about farming, that this land is ours only to use while we are here to tend, to serve and to steward and to protect.”

The forest where the lodge is located is special to Pfenning. A mother of three boys, she admits she suffered from postpartum depression after they were born and the forest was a place she found healing.

WATCH | Jennifer Pfenning on why the location of the lodge resonates with her:

Jennifer Pfenning on location of lodge

Jennifer Pfenning, an organic farmer and Wilmot township councillor, donated land for Crow Shield Lodge. She talks about why the location is special to her. 1:42

As volunteers with the lodge started to build it in the spring using items they already owned and that were donated, Cachagee said he was touched by the number of people who wanted to help and who came out to the site for healing.

People have used the site to take part in workshops on reconciliation and the child welfare system, to learn about medicinal plants and to just exist in the space, either volunteering or using the time to talk to others or self-reflect. There is no set times for people to go use the lodge, although people do need to contact the group before going.

There is also no cost to use the site, although Cachagee said people often make donations or offer to volunteer.

“We’ve been doing this for just over six months and the need for healing is so big that what is next? We need a second site. We want to duplicate what we have here.”

Setting up a second site of Crow Shield Lodge elsewhere in the region with another landowner would allow them to reach more people, he said.

“There’s so much intergenerational trauma and dysfunction, and we need to educate people as to why that happened,” he said.

“Crow Shield Lodge is a place where people can talk about their brokenness, where there’s no shame attached.”

WATCH | Clarence Cachagee talks about what brokenness is and how people can start their healing journey:

Clarence Cachagee, founder of Crow Shield Lodge, talks about the purpose of the lodge and how he believes all people are broken in some way. 0:53