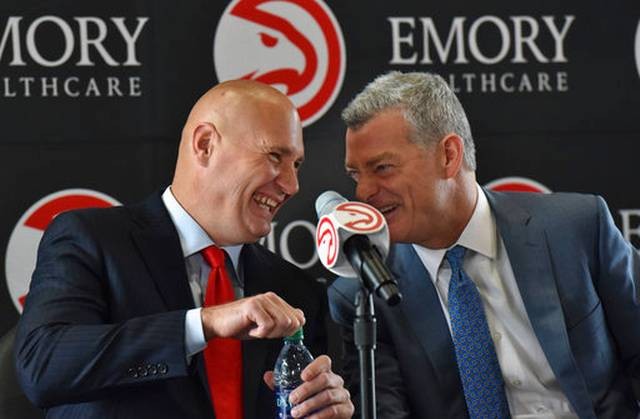 ATLANTA — Travis Schlenk knows what it takes to win a championship.

Just over a week after he was hired as general manager and head of basketball operations by the Atlanta Hawks, Schlenk was formally introduced by his new team Friday at Philips Arena, facing a host of issues ranging from re-signing free agent Paul Millsap to figuring out a role for Dwight Howard.

Hawks owner Tony Ressler gushed over Schlenk’s qualifications, saying he clearly stood out among the 8-to-10 candidates interviewed by the team.

Schlenk spent a dozen years with Golden State, helping build a team that won the title in 2015 and is playing in its third straight NBA Finals. He worked his way up to director of player personnel and spent the last five years as the top assistant to general manager Bob Myers.

Now, Schlenk has a team of his own.

While taking over a team that has made 10 straight playoff appearances, Schlenk also must cope with some major personnel issues and a sense that this is a franchise in decline after a record 60-win campaign in 2014-15, when the Hawks were top seed in the East and reached the conference finals.

This season, Atlanta went 43-39 and was knocked out in the opening round of the playoffs.

Schlenk said one of his top priorities is bringing back Millsap, a four-time All-Star who opted out of the final year of his contract .

But perhaps the most pressing issue is Howard, who still has two more years on his contract. Once one of the league’s most dominating players, the 6-foot-11 center endured a disappointing debut season with the Hawks and looked totally out of place by the playoffs.

Struggling to adapt to coach Mike Budenholzer’s motion offense, Howard averaged just eight points per game against the Washington Wizards – and didn’t play at all in the fourth quarter of the series-deciding loss .

Schlenk wants to find a way to make it work. He has yet to speak with Howard in person, but the two have exchanged text messages.

“I certainly plan to sit down,” the new GM said. “I don’t judge people on what I hear. I judge people when I have a chance to sit down and talk to them. But he’s one of the most productive big guys in the league, so he’s important to us.”

Schlenk is also stepping into what could be an uncomfortable situation, claiming authority over player personnel decisions that had been held by Budenholzer .

After a series of questionable moves, which included the signing of Howard to a three-year, $70.5 million deal and making a four-year, $70 million commitment to former D-League player Kent Bazemore (who lost his starting job late in the season), Ressler stripped Budenholzer of his title as president of basketball operations and demoted general manager Wes Wilcox – who was essentially Budenholzer’s top lieutenant – to an advisor role.

Budenholzer did not attend the news conference, but the team was quick to point out that wasn’t a sign of discontent: the coach was attending his son’s high school graduation.

While conceding that he didn’t know Budenholzer all that well before being hired by the Hawks, Schlenk said the two had met extensively this week to begin ironing out their roles and what they expect from each other.

“I have no reason to believe that there’ll be any issues with coach and I,” Schlenk said. “I’m here to help him. It’s a partnership. We’re in this together. I can’t be successful in my job in he’s not successful in his job. I think we’re going to have a very strong working relationship.”

While noting that it took seven years to build a championship team at Golden State, Schlenk said the Hawks have many of the elements needed to reach that goal, including a committed owner, a new practice facility and the ongoing $190 million renovation of Philips Arena, as well as long-term plans to develop the blighted area around the team’s home.