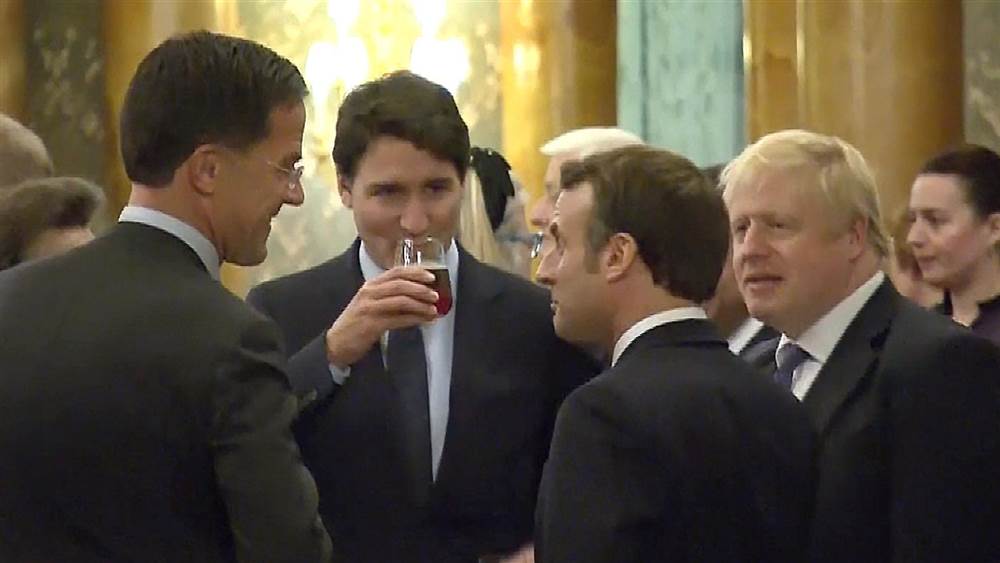 NATO gathering descends into acrimony as Trump criticizes allies, threatens to leave early
LONDON — Parties always have the potential for messy drama and NATO’s 70th birthday gathering has been no exception.

After lashing out at French President Emmanuel Macron on Tuesday, calling his comments about NATO “very, very nasty,” Trump went after Justin Trudeau on Wednesday, calling him “two faced” over remarks the Canadian prime minister made at a Buckingham Palace reception last night.

In a video captured Tuesday evening during a reception hosted by Queen Elizabeth II, several world leaders, including Macron, Trudeau and Prime Minister Boris Johnson, were caught on video having an informal chat.

The context of the conversation is not clear, and it is not known who they are discussing, but Trudeau was overheard saying, “He was late because he takes a 40-minute press conference off the top.”

Trudeau later says, “I just watched his team’s jaws drop to the floor,” again without explicitly saying who they were discussing.

When asked what he thought of the video, Trump said Trudeau was likely upset that he’d publicly noted Canada was not meeting NATO’s military spending goal.

“I called him out on the fact he is not paying two percent, and I guess he’s not very happy about it,” Trump said, adding that he thinks Trudeau is a “nice guy” despite calling him two-faced moments earlier.

Macron and Johnson’s offices declined to comment on Tuesday night’s video, and Canadian officials were not immediately available for a response. It has been widely shared on social media and reported by major news outlets.

That day the U.S. president’s press conference ran for almost three times the allotted 20 minutes, according to the White House transcript.

The world leaders gathered Wednesday in the unassuming London commuter town of Watford for talks, one-to-one meetings and press conferences among the leaders of the 29 NATO member states.

Trump was due to give a closing press conference at 10:20 a.m. ET, although it was unclear if this would take place after Trump suggested he may head straight back to Washington.

The event, held at the Grove, a luxury hotel and golf resort, got off to a bumpy start. Trump made Johnson and NATO Sec. Gen. Jens Stoltenberg wait 15 minutes for a photo with him.

An aide came to tell the pair that the president’s arrival was delayed, leaving them to stand around making small talk. When Trump did arrive, the trio posed for a photo together before the president tried to leave out of the wrong exit.

Erdoğan was also recently criticized by Macron, who condemned Turkey’s “crazy” offensive into northern Syria after U.S. troops pulled back. Macron also said that NATO was “brain dead” and suggested the alliance should focus its attention away from Russia.

The French and Turkish presidents have presented a fresh challenge for NATO, often referred to by supporters as the most successful military club in the world. Trump is normally its loudest critic, suggesting he might walk away if smaller countries do not pay more toward their militaries.

On Wednesday the White House said he will host a lunch for “NATO two percenters” — nations that spend 2 percent of their GDP toward their defense budget, as recommended by the alliance.

On Tuesday, Trump grabbed the headlines with an impromptu 53-minute news briefing, in which he called Macron’s previous comments on NATO “very, very nasty” and later said that House Intelligence Committee Chairman Adam Schiff, D-Calif. was “a maniac.”

Back in Washington, Trump faces his own drama.

The first impeachment hearings by the House Judiciary Committee begin today, with constitutional scholars testifying about the purpose of impeachment, and the definition of high crimes and misdemeanors as it relates to Trump’s conduct.

The president has scheduled his own counterprogramming, holding a press conference here in the U.K. around the same time the hearing is set to begin.

When it comes to British politics, the president appeared to do his best not to wade into the U.K.’s pivotal nationwide election being held next week. He is deeply unpopular in the U.K. and Johnson’s team has seemed coy about being associated with the president so close to polling day.

Aides to the British prime minister briefed Tuesday that he and Trump would not be holding a head-to-head meeting, raising eyebrows considering the historically close relationship between London and Washington.

In the event, the pair did meet, although it was away from the cameras and Johnson did not greet the president at the iconic front door of his residence, No. 10 Downing St.