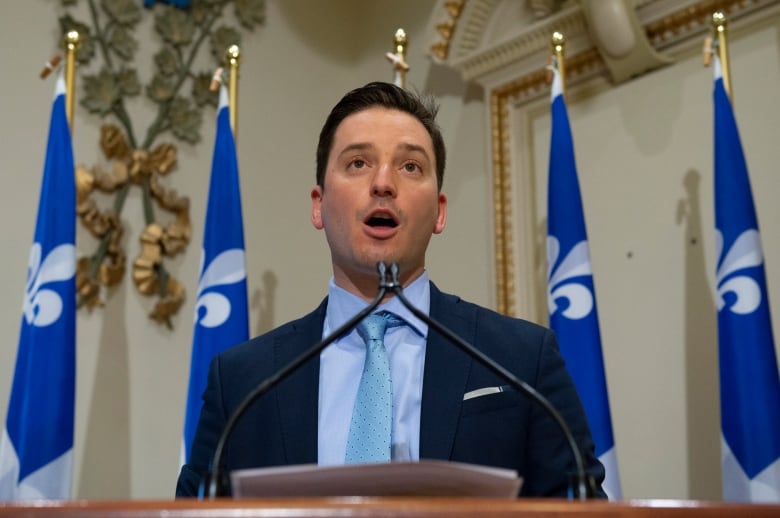 Amar Al-Shakfa dropped off her CV at a Montreal school on Wednesday, a day after learning English school boards would be exempt from the province’s ban on religious symbols under a new court ruling.

Al-Shakfa, a 25-year-old Montrealer who wears a hijab, believed the decision meant she could get a job in an English public school when she graduates later this year.

“I was very excited. I was jumping all around. It was unexpected for me,” Al-Shakfa said in an interview.

Her hopes, however, were dashed hours later, when it became clear that the ban will remain in effect pending an appeal.

“It’s just so frustrating. It’s so crazy that they are doing all this for a piece of fabric,” she said.

A spokesperson for the English Montreal School Board said the board started hearing from applicants like Al-Shakfa soon after the decision landed.

“We were quite excited and started receiving calls from people who we were going to proceed and interview,” said Mike Cohen.

He noted the board, like most educational institutions in the province, is coping with a shortage of teachers.

But the Quebec government has signalled it will appeal the decision, effectively freezing it from having any effect until the case is heard again at a higher court, which could take at least a year.

Al-Shakfa, is still hoping to get a job in Quebec. She studied environmental science at Montreal’s Concordia University, and is nearly finished her master’s in education at McGill University.

But for now she has set her sights on trying to find a position teaching science in a private school, where the religious symbols ban doesn’t apply.

“I was born in Canada,” she said. “Teaching was always my passion so it’s not going to stop me.”

Other than the exemption for English schools, the Superior Court decision largely left Bill 21 intact.

But that exemption sparked outrage in nationalist circles, prompting concerns the judge was allowing the anglophone community to disobey laws passed by Quebec’s National Assembly.

On Wednesday, the legislature unanimously passed a motion saying its laws “apply everywhere in Quebec.”

In carving out the exception for Anglo schools, Justice Marc-André Blanchard highlighted the importance these schools place on “celebrating religious and ethnic diversity.”

This diversity, he said, represented an asset to both students and other teachers, and was an integral part of the anglophone community’s culture.

WATCH | How Quebec’s religious symbols law has changed the lives of three teachers:

Three women discuss the impact Quebec’s secularism law has had on their lives. 2:56

Elsewhere in the decision, Blanchard noted the effects of the religious symbols ban would be felt in particular by Muslim women who wear the hijab.

Bill 21 violated both their religious freedoms and freedom of expression, Blanchard said. But, he added, because the government invoked the notwithstanding clause, those violations can’t be used as grounds for invalidating the law.

Minority language education rights, on the other hand, are not subjected to the override clause.

With no prospect of relief from the ban in the near future, many Muslim teachers are now being forced to confront, yet again, feeling excluded from Quebec social life.

Maha Kassef, who wears a hijab and teaches at a French elementary school on Montreal’s West Island, was able to keep her job after the law passed in 2019 because of a grandfather clause.

But she can’t be promoted or work anywhere else in the province without being forced to remove her headscarf.

Kassef had aspirations of becoming a principal. Instead, she works part-time as a homeroom teacher for grades 2 and 4.

“It’s weird, but I’ve done everything that any Quebecer does in their life,” she said. “To be presented with something like this, it just made me feel like I’m less of a person, less of a human being.”

Nadia Zaidi resigned from her job as an elementary school teacher last year, even though the grandfather clause allowed her to keep working.

“I would never have the courage to one day explain to my students that I was able to keep my hijab [only] because I was hired a couple of years ago,” she said.

Zaidi said she is considering leaving Quebec with her family because of the law.

“You realize that in the province you grew up in, you no longer feel at the same level as everybody else just because of my faith and because I choose to wear a hijab,” Zaidi said.