Meet Goosey Lucy, the bird that fell in love with a Hampton, N.B., man 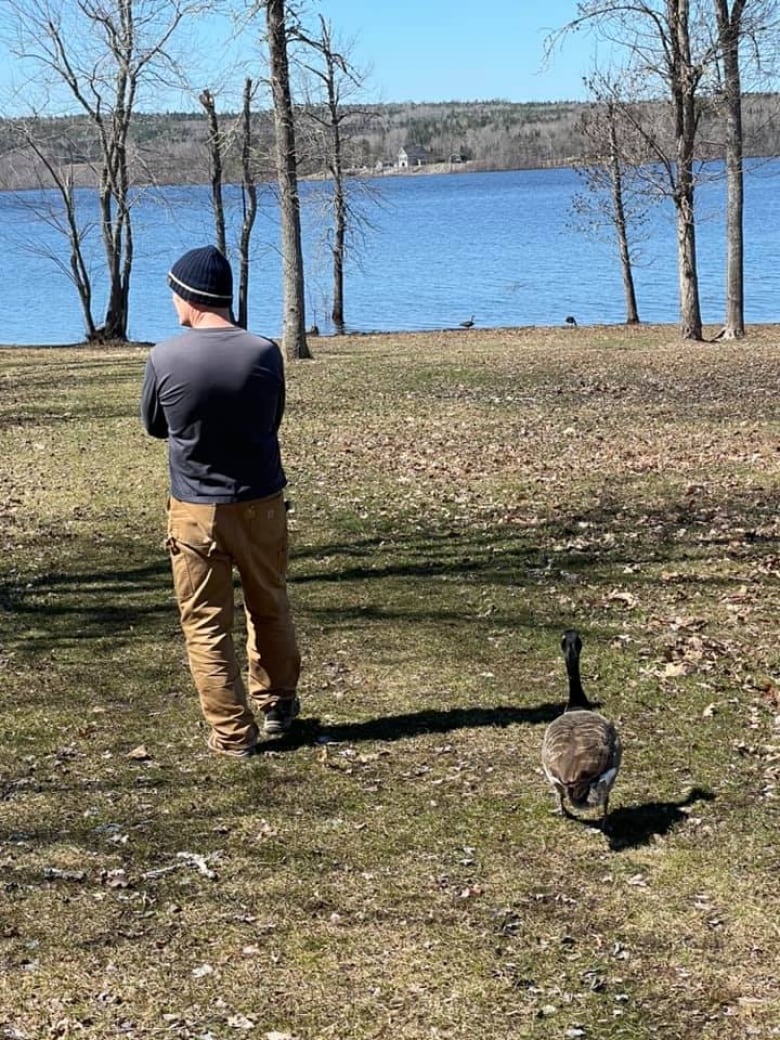 Love comes around when you least expect it — at least that’s what happened to George Pattison.

The Hampton man hosted an unexpected visitor at his Washademoak Lake cottage late last week, about 40 kilometres north of the southern New Brunswick town of Hampton.

“I was minding my own business and the goose just came up the property,” George said.

For about an hour, George Pattison was raking rocks on the property, getting ready to lay down seed grass at the cottage.

But whenever George turned around to look at the lake, he noticed a Canada Goose making its way up the property.

“Generally the geese are minding their own business and it’s the humans that kind of walk into their space and then they move away,” he said.

Once the animal was about nine metres away George stopped working — trying to decipher what might happen next.

“I didn’t know what to expect. I’d never been attacked by a goose before.”

George even put a large rake between himself and the animal. But nothing could separate them.

That’s when he slowly took his cellphone out to call his wife, Lisa Pattison. He told her to come look out the window.

“That’s what kind of started the relationship,” he said.

George Pattison was doing yard work at his cottage in Washademoak Lake when a goose imprinted on him and followed him around all day. 0:59

Eventually, Lisa came outside too to see how the animal would interact with her.

But the goose, also known as Goosey Lucy, only had eyes for George.

“It would turn its head sideways and look at him, like the puppy look with love.”

The goose followed George around the property and honked whenever he went inside.

At one point, George was putting together a deck box, and the goose stood on top of the pieces while he was assembling it, just like a child.

“We just couldn’t believe it was that close to him and wasn’t frightened at all,” Lisa said.

The couple also encouraged the goose to visit the water and return to nature. They even discovered another goose for the bird to interact with.

When George returned to the cottage, so did the goose.

“It didn’t leave his side,” Lisa said. “It waddled where he went.”

The couple, who typically have a lot of geese on their property, believe the goose might’ve lost its mate and was looking for company.

“I kind of felt bad … I have another life and a wife,” said George, who has been married for 30 years, with seven kids.

“I’m moving on and this relationship is only going to last a day or so.”

She said geese can be quite aggressive, particularly during mating season when protecting their nest.

“They would let you know you are not welcome,” she said.

Although unlikely, Novak said it’s possible the bird was raised by people and was looking for a new human.

While geese can mate for life, it’s also possible the bird was looking for another mate.

And if the bird was sick, it wouldn’t be following a human around.

“By nature, birds are going to do what they can to protect themselves,” she said. “They wouldn’t want to show predators they’re sick.”

When it was time to return home, the couple tried to sneak away so the bird wouldn’t notice.

“It actually followed the car.”

While Lisa was hoping the goose would return to the water, George was slightly hopeful it would fly back home with them to Hampton.

George returned to the cottage to check on his old flame the next day, but the goose was gone.

“It had moved on to find someone else,” he said.