MMR vaccinations at a 10 year low. 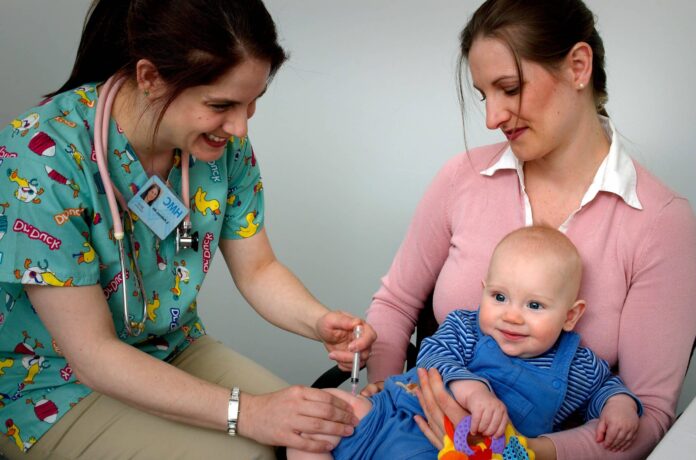 Official figures have shown that MMR vaccination uptake is at a 10 year low after parents didn’t want to burden the NHS with appointments over the course of the pandemic.

The UK Health and Security Agency (UKHSA) is urging parents to ensure their children received their measles, mumps and rubella vaccine as well as other routine injections before they send their children to school.

Vaccinations for MMR are at their lowest level in a decade, with just 85.5 per cent of all 5-year-olds in England having the necessary two doses. The most recent official figures cover July to September 2021.

The last time MMR vaccination uptake was below its current level was July to September 2011, when just 85.4 per cent of five-year-olds were fully vaccinated against the diseases.

The World Health Organisation (WHO) state that in order to keep measles at bay, 95% of children need to be vaccinated.

According to official figures, only 88.6 per cent of children had their first MMR dose by the age of two, which means that more than one in 10 children aged five are not up to date with their MMR vaccination.

Every child in the UK is invited for their first MMR vaccine on the NHS aged one, the second does is given when they are three years and four months old.

Measles is an incredibly infection diseased that can cause serious illnesses such as encephalitis (inflammation of the brain) or pneumonia.

One in 10 parents admitted that they did not know the NHS were still offering MMR vaccine appointments during the pandemic, the same proportion of parents did not take their children to receive their MMR doses because they didn’t want to burden the health service, according to UKHSA surveys.

Of the 2,000 parents surveyed, more than three in five were unaware measles can be fatal.

As the country opens its international travel once more, the UKHSA have said it will be more likely that measles will be brought into the country from somewhere with higher levels of the disease in circulation. Because of this, it is vital that MMR vaccination rates increase in the UK.

Since the introduction of the mumps, measles and rubella vaccine in the 1960s, there have been nearly 20 million cases of measles and of which 4,500 death were prevented in the UK.

Since the introduction of the measles vaccine in 1968, it is estimated that 20 million measles cases and 4,500 deaths have been prevented in the UK.

In very rare cases, measles can facilitate a condition called SSPE (subacute sclerosing panencephalitis), which is the progressive destruction of the central nervous system causing loss of motor control, epilepsy, and death.

Stephen Baker, professor of microbiology at the University of Cambridge, warned if parents stop immunising their children, “we will go back to the Victorian era”.

“If we take away vaccines, they’ll bounce back.”