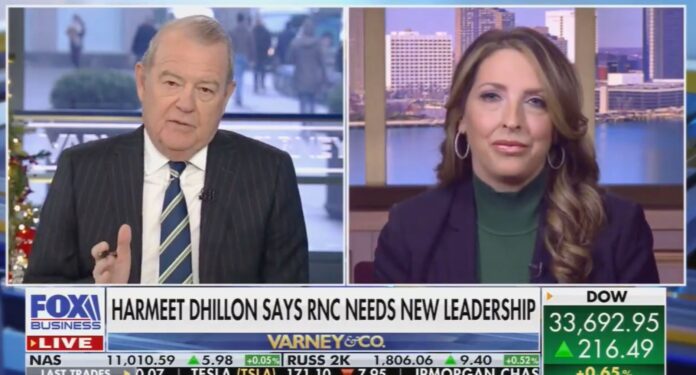 Republican National Committee chair Ronna McDaniel appeared not to enjoy Fox Business host Stuart Varney’s line of questioning when he quizzed her on whether Donald Trump is to blame for the GOP’s poor performance in the 2022 midterm elections, as many conservatives have charged because of his wholehearted endorsement of multiple fringe candidates who then lost.

“Would you publicly say Donald Trump bears any responsibility for some of the losses in the midterm elections? Would you say that publicly?” Varney, a one-time staunch supporter of the former president, asked McDaniel on Monday.

“Here is the one thing I think people should be talking about, the amount of ticket-splitting,” she continued. “The amount of Republicans that went out and voted for a Republican at the top of the ticket. Look at Arizona, the top vote-getter is a Republican. Look at Georgia. We had eight of nine statewide races won by Republicans. But why are Republicans voting for one Republican and not the other?”

Varney answered: “Trump. Isn’t that the answer to your question? You actually posed a question. The answer is Trump, isn’t it?”

McDaniel, who is now facing multiple challenges to her GOP leadership role, refused to agree. “I’m saying, I’m not into the blame game right now,” she replied. “I think we got to do analysis. I think it is too quick.”