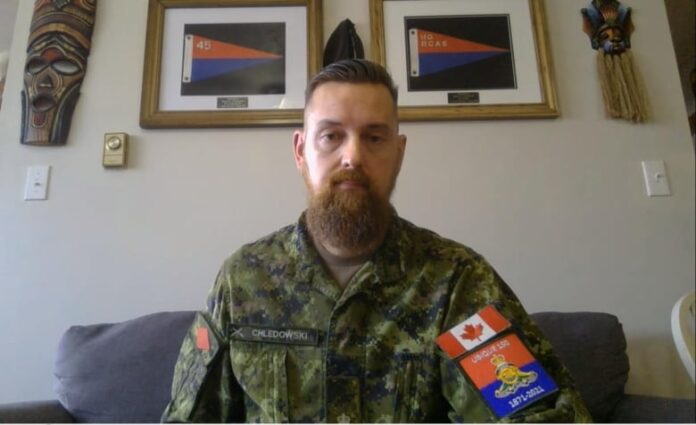 Emails released through a public inquiry suggest federal Liberal political aides were scrambling earlier this year to figure out the extent to which members of the Canadian Armed Forces were supporting the self-described “Freedom Convoy” protests that had gridlocked downtown Ottawa.

The internal communications are among thousands of documents submitted to the Public Order Emergency Commission, which is looking at the Liberal government’s decision to invoke the Emergencies Act to end the demonstrations in February.

The email goes on to provide a “list of known members connected to protests,” including five who are specifically named and two who are not. Those not named include a special forces soldier based in Ottawa and a civilian Defence Department employee.

All names are redacted in copies of the emails provided to the commission as “Personal Info.”

The list also includes the individuals’ location, the action the military was taking at the moment and the results of any actions that had already been taken.

The list appears to have sparked a strong reaction from Mendicino’s director of communications, Alexander Cohen, who used an expletive in his response to Minden, saying: “How the f— many soldiers are in the convoy?”

Minden and Cohen did not immediately respond to requests for comment on Wednesday.

The email does not provide specifics about what those on the list were accused of doing or what rules they are alleged to have broken.

It also isn’t clear how many were voicing support for the self-styled “Freedom Convoy” and how many were speaking out publicly against the military’s requirement that all Armed Forces members be vaccinated as a condition for their continued employment in uniform.

The military has forced about 300 members out of uniform over the past year because they refused to get vaccinated against COVID-19.

About 100 others have left voluntarily, while hundreds have had permanent censures put on their files.

Defence Department spokesman Daniel Le Bouthillier said the threshold would have been “various actions that would run contrary to” the military’s rules around discipline, code of ethics, and other rules and guidelines.

“Any member of the Armed Forces who brings discredit to the CAF through either conduct or performance deficiencies, be it through actions or words, will be held accountable,” he said in an email Wednesday.

Le Bouthillier added that the military has since identified 13 cases of Armed Forces members publicly supporting the self-styled Freedom Convoy protests, some of whom appear to have been included in the list sent by Minden.

Those include Aviator Riley MacPherson of 19 Wing Comox, who was found guilty of conduct to the prejudice of good order and discipline and fined $500 after posting a video voicing support for the convoy while in uniform in February.

There is also a reference to a military police investigation of an Armed Forces member in Gagetown.

The military previously said it was investigating Maj. Stephen Chledowski after a video was posted to social media of the officer speaking out against mandates and restrictions while in uniform. The post was made during the protests last winter.

The Defence Department said it was trying to get an update on the investigation on Wednesday. Chledowski did not immediately respond to requests for comment.

One name that appears to have been missing from the list is Warrant Officer James Topp, who is facing a court martial after appearing in two videos posted on social media in February criticizing vaccine requirements for military personnel and other federal employees.

The army reservist later became a symbol of sorts for those opposed to vaccine mandates and pandemic restrictions after a cross-country march that included a meeting with Conservative MPs on Parliament Hill, including the current Conservative Leader, Pierre Poilievre.