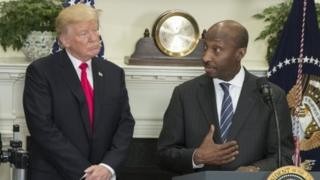 The head of drugs giant Merck has said he is resigning from President Trump’s American Manufacturing Council following Charlottesville.

A woman was killed on Saturday when a car rammed into a crowd protesting against a white supremacist rally.

Following the death, Mr Trump was criticised for not specifically denouncing the far right.

Ken Frazier tweeted: “I feel a responsibility to take a stand against intolerance and extremism.”

“America’s leaders must honour our fundamental views by clearly rejecting expressions of hatred, bigotry and group supremacy, which run counter to the American ideal that all people are created equal.”

In response, Mr Trump tweeted that Mr Frazier would now have “more time to lower rip off drug prices”.

Now that Ken Frazier of Merck Pharma has resigned from President’s Manufacturing Council,he will have more time to LOWER RIPOFF DRUG PRICES!

In a meeting at the Oval Office, the president met Mr Frazier and other executives from companies such as Johnson & Johnson and Eli Lilly, and told them prices for drugs must come down.

He said if they brought production back to the US, the administration would lower regulations and speed up approval for new medicines.

The White House has rejected criticism of President Trump’s response to the violence at the weekend.

Demonstrations and vigils have been held in cities across the United States in support of Charlottesville.