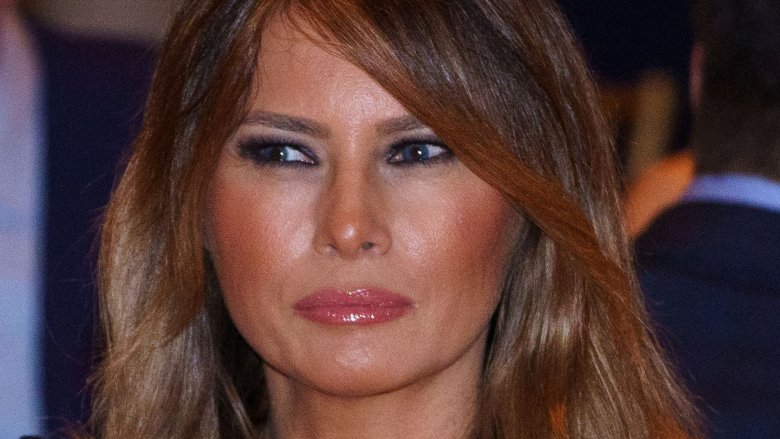 First Lady Melania Trump has found herself in hot water yet again. This time, she’s received intense criticism for her Thanksgiving Day tweet.

On Thursday, Nov. 22, 2018, Melania Trump took to Twitter to share her thoughts on the national holiday with all of the United States, including her 11.2 million followers. “Wishing you all a very happy Thanksgiving!” she wrote in the post. “As we give thanks, let’s keep those who can’t be with their families in our thoughts today. #Thanksgiving.”

And, well, not everyone was having it. In fact, some found Melania’s tweet to be flat-out tone deaf, considering her husband’s recent political move as the ever-controversial President of the United States. “You mean the troops your husband sent to the border for a political stunt … [whispers] which failed.. ?” one Twitter user wrote in response to Melania’s post.

“Like the 5000 members of the military at the border,” another flatly replied.

Another person tweeted, “You can thank @POTUS for keeping troops away from family and friends this thanksgiving.”

As CNN reported on Tuesday, Nov. 20, 2018, the president announced that he would deploy as many as 15,000 troops to the country’s southern border with Mexico in an effort to keep migrants from Central America seeking asylum out of the United States. He reportedly instructed the Pentagon to send 5,900 troops to the border until Dec. 15, in a move that will cost American taxpayers $72 million.

Trump also gave troops the authority to “protect Customs and Border Protection personnel from migrants if they engage in violence,” according to CNN. The troops can reportedly use methods of “crowd control, temporary detention and cursory search.”

In response to reporters’ concern about the troops being stationed away from their families right before Thanksgiving, Trump claimed that the active troops “are proud to be on the border” and “are proud to be defending our nation,” adding, “And we are not letting people in.” As reported by Newsweek, Trump told the press on Nov. 20, not to worry about the troops being sent to the border. “These are tough people, they know what they’re doing and they’re great and they’ve done a great job. You’re so worried about the Thanksgiving holiday for them,” he said. “Where if you look at what’s happening in Mexico the people from Tijuana are saying, ‘Wow these are tough people, they’re fighting us.’ They’re in fist fights all over the place.”

Trump reportedly spent his Thanksgiving holiday with his family at his Mar-a-Lago resort in Florida.

Sources had previously told Newsweek that Trump’s plan to deploy troops to the border was a “a politically motivated tactic,” as Trump had revealed the plan just one week before the midterm elections on Nov. 6. “There is no practical or tactical reason for this to happen,” an insider shared.

This is hardly the first time that Melania Trump has faced backlash for her actions, specifically with how they relate to those of her husband. In June 2018, she wore an army green jacket from Zara with the phrase “I really don’t care, do u?” displayed on the back, as reported by Vox. She wore it as she boarded an Air Force jet on her way to see migrant children who’d been separated from their parents at the Texas-Mexico border as a result of her husband’s “zero-tolerance” policy regarding people who enter the United States illegally.

Understandably, Melania’s jacket was deemed offensive by many. In response to the criticism, Melania’s communications director Stephanie Grisham said, “It’s a jacket. There was no hidden message. After today’s important visit to Texas, I hope the media isn’t going to choose to focus on her wardrobe” (via Town & Country).

Grisham also tweeted out at the time, “Today’s visit w the children in Texas impacted @flotus greatly. If media would spend their time & energy on her actions & efforts to help kids – rather than speculate & focus on her wardrobe – we could get so much accomplished on behalf of children. #SheCares #ItsJustAJacket.”

Melania’s husband, on the other hand, addressed the scandal over his wife’s choice of outerwear by saying the message on her jacket had a different target. He tweeted, “‘I REALLY DON’T CARE, DO U’ written on the back of Melania’s jacket, refers to the Fake News Media. Melania has learned how dishonest they are, and she truly no longer cares!”

At the time of this writing, neither Stephanie Grisham nor Donald Trump has yet to tweet out about Melania Trump’s Thanksgiving Day post.