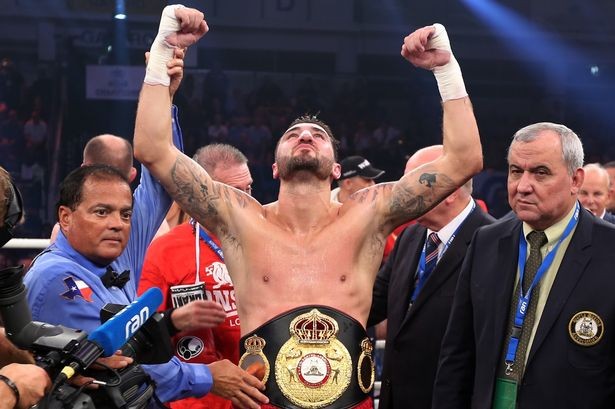 Badou Jack took away a light heavyweight belt from Nathan Cleverly with a TKO victory at T-Mobile Arena in Las Vegas on Saturday.

Fighting on the Floyd Mayweather-Conor McGregor undercard, Jack made a statement against an experienced veteran two-time titleholder with a tremendous performance.

“I wanted to box him and feel him out while establishing my jab. Then the plan was to break him down from there. The plan was to finish him,” Jack said. “I got a little excited at times but I barely got hit. My boxing IQ was the difference in this fight. Everybody doubting me motivated me. My trainer and my team did a great job getting me to this point. It’s a dream come true.”

Jack got off to a good start as he found Cleverly early and often with clean punches in the opening round and never really let up.

Jack (21-1-3, 13 KOs) had a huge fourth round as he lashed Cleverly with numerous clean left hands and also connected with a solid right hand. Cleverly had nothing to offer in the return and by time the round ended Cleverly looked spent and his face was a bloody mess.

In the fifth round he trapped Cleverly near the ropes and fired punches with both hands, causing Cleverly (30-4, 16 KOs), 30, of Wales, to cover up and throw only desperation shots.

Jack, 33, a Sweden native fighting out of Las Vegas, where he trains with Mayweather, continued to pound Cleverly in the fifth, landing a hard right hand and an uppercut before referee Tony Weeks had seen enough and stepped in at 2 minutes, 47 seconds.

“You can’t leave it in the hands of the judges. You’ve got to go for the kill,” Jack said. “I think [world champion] Adonis Stevenson [is next]. Let’s get it on. Unless you [Stevenson] want a trilogy with Andrzej Fonfara, let’s get it on. Let’s fight somebody real. I’d go anywhere.”

Jack was fighting for the first time since a majority draw in a January super middleweight world title unification fight with James DeGale. Shortly after the action-packed fight Jack vacated his 168-pound belt and announced he would move up to the 175-pound division.

Cleverly was making the first defense of the belt he won last October when he stopped Juergen Braehmer in the sixth round on Braehmer’s turf in Germany.

“Jack was very strong. He caught me and broke my nose in the third round,” Cleverly said. “It was a downward spiral from there. I was wounded and protecting myself. It’s horrible but part of the sport. I thought the stoppage was premature. He had just swung and missed but it’s up to the referee in the end. I have to respect that decision.

Baltimore’s Gervonta Davis (19-0, 18 KOs) was supposed to defend his junior lightweight world title for the second time in his fight with Costa Rica’s Francisco Fonseca (19-1-1, 13 KOs) but he was stripped of the belt weight in at 132 pounds, two over the division limit.

But the fight went ahead anyway with Fonseca, who was on weight, eligible to win it. But he did not come close as Davis, though he did not look good, knocked out Fonseca in the eighth round with an apparent illegal punch.

Davis, who at 22 had been the youngest active American world titleholder and the third youngest in boxing before being stripped, went after Fonseca, 23, who was boxing in the United States for the first time, with one power punch after another. Davis, a southpaw, clipped him with many uppercuts and straight left hands and had Fonseca on the defensive throughout the bout.

In the fourth round, Davis landed a clean uppercut and then taunted Fonseca by putting his hands behind his back, bobbing and weaving, like Roy Jones Jr. once did against an overmatched opponent.

But Fonseca was tough and hung in there, including when he rocked Davis with a right hand in the seventh round. Later in the round, Davis landed a left hand behind Fonseca’s head and pushed him down, but referee Russell Mora did not call a foul. Instead, he ruled it a knockdown and counted Fonseca out at 39 seconds as the crowd booed the call.

“I guess the camera didn’t show the right clip of me catching him. I actually caught him with a body blow before that punch,” said Davis, who said he plans to remain at junior lightweight and try to regain his title. “It hurt him, and he knew he was hurt so he took advantage of me swinging and fell down. I don’t think it was illegal, but it had no effect on him. I know for sure it didn’t.”

“He never hurt me in the exchange,” Fonseca said through a translator. “Even though he came in at 160 pounds [after rehydrating] he doesn’t hit as hard as they say.”

Tabiti, 27, of Las Vegas, was awarded scores of 100-90, 97-93 and 97-93 as he put the name of a respected veteran on his record. Cunningham, 41, of Philadelphia, was easily Tabiti’s most notable opponent and though Cunningham had far more experience it was of little use.

“I was just jabbing him and making sure I stayed smart,” Tabiti said. “He’s a veteran, so I had to stay composed. I wanted to show that I could box. This was a step up for me and I felt comfortable in there. He had a decent jab but he wasn’t busy enough. I just didn’t want to make mistakes. If you start too fast against a veteran you’re liable to get caught by him.”

Cunningham, who has been in many tough fights, could not deal with his movement and landed far fewer punches. Cunningham dropped to 1-3-1 in his last five fights.

“I don’t think Andrew Tabiti is a championship level fighter. I thought I won the fight,” Cunningham said. “I didn’t think I saw anything special from him. He was quick and sharp, so I didn’t want to just lunge in and make a mistake. I took my time but when I saw that he wasn’t trying to fight, I had to push it a little more.”