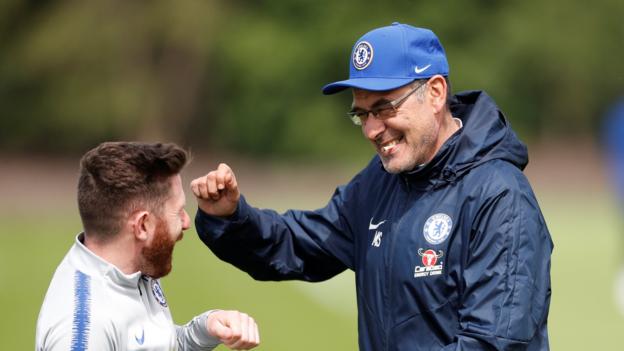 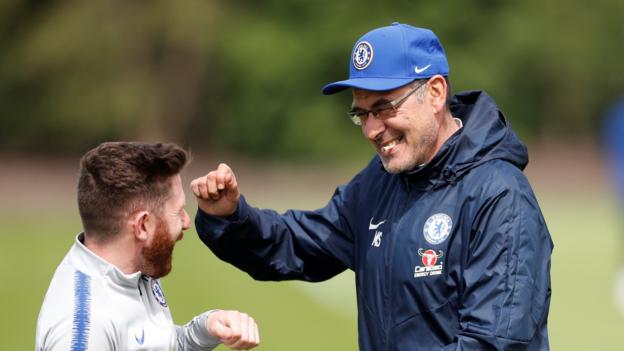 Chelsea manager Maurizio Sarri says his future should not be decided by the Europa League final result – adding if that was the case “I want to go immediately”.

He did say that he will discuss his future with the club “to know if they are happy with me”.

Sarri says he is “very happy” in the Premier League and remains focused on facing Arsenal in Baku on 29 May.

Asked whether his future depended on the outcome of the final, he responded: “If the situation is like that I want to go immediately because you cannot after 10 months of work have to play everything in 90 minutes.

“You are either happy with my work or not happy.”

Sarri led Chelsea to a third-place finish in the Premier League, 26 points behind champions Manchester City.

The Italian, appointed in July 2018, has two years remaining on his contract and has been linked with Juventus after their manager Massimiliano Allegri announced he was leaving the Serie A champions.

“I have two years of my contract here,” said Sarri. “I have no contract with other clubs. I have to speak with my club after the final. I want to know if they are happy with me.”

Sarri has received criticism from some Chelsea supporters for his style of play despite qualifying for the Champions League and reaching a European final.

He believes his style of play is similar to that of Manchester City, who completed a domestic treble by winning the FA Cup on Saturday.

“The way they play is not like mine but it is similar, so I can play my football in England.”

Chelsea face Arsenal in an all-London Europa League final in Azerbaijan with many supporters unable to attend the game because of travel difficulties.

Sarri believes the location of the venue is a “problem” but says it is “the same for both teams”.

“Of course it is better to play with 30,000 fans of each team,” said Sarri. “You do this job for these matches so it is better for everybody to have their fans with the team.”

Chelsea will be without injured duo Callum Hudson-Odoi and Ruben Loftus-Cheek, who is expected to be out between “four to six months” after rupturing his Achilles tendon.

“The final is usually an open match and Ruben would have been very important for us. Arsenal have two dangerous strikers and they are very dangerous as a team in the offensive phase.

“They can press very well in the opposite half and the coach is working well.”

‘I would like to see him on the pitch’ – Mkhitaryan missing

Unai Emery’s side will be without midfielder Henrikh Mkhitaryan who has opted not to travel amid security fears, and Sarri says he is “disappointed” not to see the Armenian feature.

“I would like to see him on the pitch but in this situation you can only respect the decision of the man and not the player,” he added.

Eden Hazard – who remains linked with a move to Real Madrid – is expected to feature in Baku and Sarri says the club must “respect his decision” to stay or leave Stamford Bridge.

“I hope he will stay with us but we need to be ready if he decides something different,” he said.

“If I have spoken to him, I do not want to say anything.”