Massive winter storm expected to dump rain, ice, snow on much of US 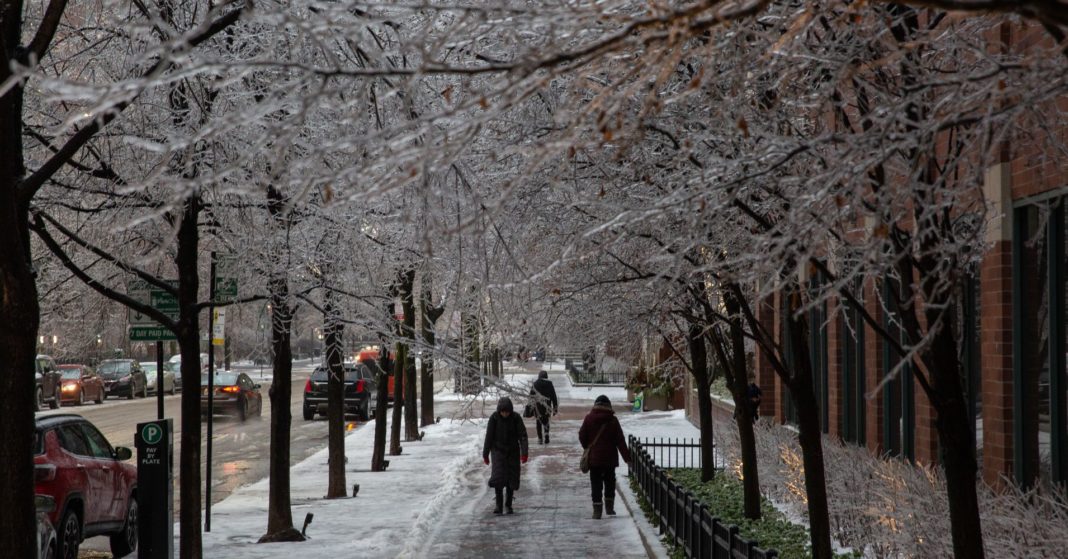 A massive winter storm could create travel and commuting trouble for as many as 200 million people in as many as 39 states, forecasters said Tuesday.

The system is expected to dump rain, snow and ice across the South, Midwest, Mid-Atlantic and southern New England.

“A large winter storm will affect locations from the Upper Midwest to the East Coast beginning tonight,” the National Weather Service said in a forecast discussion Tuesday. “Significant amounts of moisture will spread north and east from the Gulf of Mexico.”

The upper-level system could bring 6 inches of snow to parts of the Midwest, 4 inches to Washington, and as many as 2 inches to New York, according to NBC News’ meteorologist Dylan Dreyer.

By Tuesday night, it had already moved into the Rockies and Plains.

As the storm reaches the East Coast and southern New England on Wednesday afternoon, some of the precipitation is expected to turn to rain, she said.

Officials were calling for caution ahead of its arrival. In New Jersey, Gov. Phil Murphy declared a state of emergency effective at 5 a.m. Wednesday. “We are urging residents of New Jersey to drive with caution and use their best judgment during this time,” he said in a statement.

New York City was also bracing for a difficult day of travel, and the city’s Emergency Management Department issued an advisory for Wednesday. “We are expecting snow and sleet to develop in the afternoon, causing for a messy evening commute,” emergency management commissioner Joseph Esposito said in a statement. “We advise you to use mass transit, give yourself extra travel time and exercise caution.”

The National Weather Service issued a winter weather advisory for the city, warning of “snow, sleet and/or freezing rain.”

Pennsylvania Gov. Tom Wolf was also urging motorists to stay home Wednesday. “This storm could bring with it a travel mess, and so I encourage everyone who can stay off the roads to do so tomorrow.”

The state’s Department of Transportation issued a commercial vehicle ban for certain roads. That will start at 6 a.m. Wednesday and was slated to last “through the storm,” according to a statement.

The sub-freezing temperatures also prompted preparations for the homeless.

Southwest Airlines warned in a statement of “delayed, diverted, and/or cancelled” flights in the Ohio Valley and in the Northeast on Wednesday. Travelers using airports in Baltimore, Boston, Cleveland, New York, Philadelphia and Washington could be affected, the airline said.

And in Washington, Ronald Reagan National Airport in Washington appeared to suggest that travelers think twice about flying at all Wednesday. “Several airlines have waived change fees for customers wishing to proactively rebook their flight to avoid tomorrow’s winter storm,” the airport tweeted.