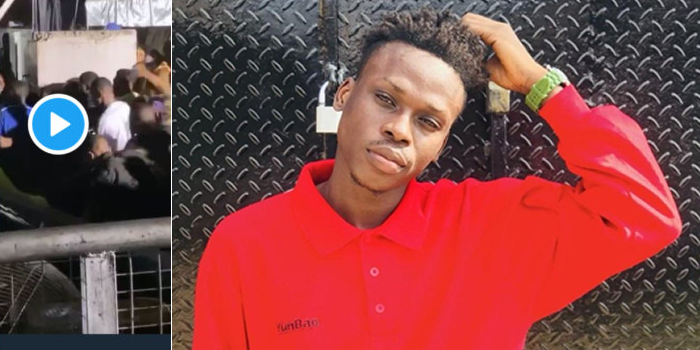 Several people have been reported to have sustained various degrees of injuries at the Nativeland concert which was held on Thursday, December 19, 2019, at the Muri Okunola park.

According to videos and photos which have been released by various people who attended the concert, the VIP stage caved in minutes into singer, Fireboy’s performance.

It was said that the hall was overcrowded and the show started late and many were complaining and uncomfortable already.

However, some minutes during Fireboy’s performance on stage, the VIP of the hall suddenly fell off causing a stampede. Also, many were injured during this accident.

Some people who attended also said that the hall was locked up and people weren’t allowed to go out.

A man was also beaten up by MOPOL at the event and many revealed they lost properties like wigs, shoes, earrings during the stampede.

However, the organisers of the annual event have come out to release a statement. According to them, the crowd overwhelmed the security operatives and a lot of people came in with multiple unticketed entry passes.

They went on to apologise to ‘Nativelanders’ who took out their time to attend the concert while promising to get a bigger venue for their next concert. This apology, however, didn’t go down well with a lot of people as they have been calling out Nativeland on Twitter.

Many say the organisers didn’t properly handle the operations and logistics for the event which led to the collapse of the VIP section of the venue.