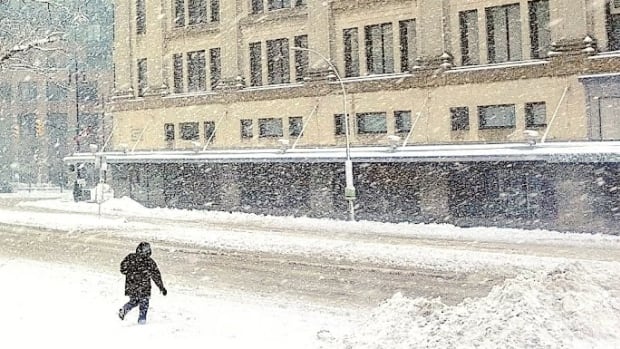 A major spring blizzard “poised to wallop” southern Manitoba for three days this week could be the worst in decades, Environment Canada says.

In an updated storm watch notice on Monday, the weather agency said widespread snowfall of 30-50 centimetres is expected, along with north winds gusting from 70-90 km/h, giving zero visibility at times.

Do not plan to travel and stock up on needed supplies and medications now, the weather alert from Environment Canada says.

“This storm has the potential to be the worst blizzard in decades.”

To put that into context, though, Winnipeg typically averages 127 cm of snow over the course of a winter, so 45 cm would be nearly one-third of an entire season’s worth of snow.

The biggest single snowstorm this winter was 20 cm, back on Dec. 27.

“This one will rival the storm back in 1997, when Winnipeg picked up 48 cm of snow,” Sauder said. “Sometimes I use the term ‘city-paralyzing storm’ and I think this has potential to be that.

“So yeah, this could be one those storms where we see the city kind of shut down and stores closing. Highway travel? Absolutely forget it.”

Forecast storm position as of 7 am Wed Apr 13 via Canadian RDPS model. Strong low moving into central Minnesota with snow spreading into srn MB from the south. Snow expected to start in Winnipeg Wed am. Storm forecast to move slowly over nrn MN thru Thu before heading east <a href=”https://t.co/8SCNjBeEW8″>pic.twitter.com/8SCNjBeEW8</a>

Although things should ease up through Good Friday, temperatures won’t be warm enough to start melting the heap of snow. A high of –5 C is forecast for Friday and –1 for Saturday. The normal daytime high for this time of year is 9 C.

“But by that time, I think things will start to open up, as far as the plowing operations go,” Sauder said. “It’ll take a couple of days, but perhaps by Sunday we’ll be back into some travelling.”

If it’s any consolation, having a storm around this time of year isn’t unusual. Last year, on April 12-13, Winnipeg was hit with 23 cm of snow, Sauder said.

“We got through that OK. That one didn’t accompany a whole lot of wind, but still.”

The system, a Colorado low, is on track to hit the province starting Tuesday night and last through to Friday before it heads into northwestern Ontario.

It will begin near the U.S. border Tuesday night as the system moves toward Minnesota, and continue to push northward.

By Wednesday morning there will be heavy snow falling from southeastern Saskatchewan through most of southern Manitoba, Environment Canada forecasts.

“By Wednesday evening, even travel within communities may become impossible as the heavy snow and strong winds continue. And more of the same is expected on Thursday.”

As of Apr 10, Winnipeg has had 174 cm of snow so far this winter. With the upcoming <a href=”https://twitter.com/hashtag/MBstorm?src=hash&amp;ref_src=twsrc%5Etfw”>#MBstorm</a> this week, our seasonal snowfall could hit the 200 cm mark for only the 8th time in 150 years of records <a href=”https://t.co/1eq3VA8HRn”>pic.twitter.com/1eq3VA8HRn</a>

Power outages are likely and rural areas in particular should be prepared for extended outages.

Conditions should begin to improve on Friday as the winds taper off and the heaviest snow moves east, “although the cleanup after this storm will likely last well into next week,” Environment Canada says.

What it means for potential flooding has yet to be addressed.

Back in 1997, the Red River Valley was saturated — from heavy rains in fall 1996 and a long, cold winter that brought four blizzards — and couldn’t absorb the melt.

This winter was equally long and cold and marked by multiple blizzard warnings, but this time around, the fall was extremely dry coming off a summer of drought.

Regardless, the melt from the coming storm will add to the flood potential, Sauder said.

“And all of that’s going to feed into the Red River and flow in this direction,” Sauder said. “So I do think after that nice slow melt that we were enjoying, this will make a difference.”