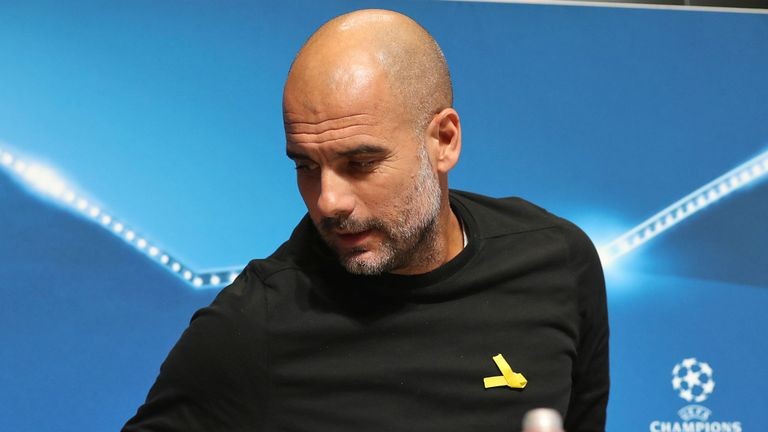 Pep Guardiola’s ‘defiance’ in continually wearing a yellow ribbon is the reason why he was fined £20,000, according to the written reasons published by the Football Association.

In addition to the fine, Guardiola was warned about his future conduct after repeated warnings about wearing the ribbon, which an Independent Commission concluded ‘clearly symbolised a political message’.

The three-strong commission had considered banning Guardiola but did not deem it to be proportionate, despite Guardiola first being warned about wearing the ribbon on December 13.

It has also emerged that Manchester City were issued with a formal warning for their failure to pass on FA correspondence to Guardiola in a timely fashion.

Guardiola had been wearing the ribbon to press conferences and on the touchline since October as a show of support for four Catalan politicians, who have been imprisoned amid accusations of rebellion and sedition following the region’s declaration of independence in October.

The 47-year-old born-and-bred Catalonian initially told the Commission – in a letter via Manchester City – that he did not consider the ribbon to be a political symbol.

The Manchester City boss was told by the FA in January he would face disciplinary action if he continued to wear the ribbon, but Guardiola persisted, receiving another warning from English football’s governing body on February 8.

No immediate action was taken against Guardiola before this as he had not been fully briefed on the matter by Manchester City. This resulted in City being issued with a formal warning by the FA on February 8.

Guardiola was eventually charged after wearing the ribbon in an FA Cup tie against Wigan on February 19. He admitted the charge but said the breach was unintentional, adding he had inadvertently displayed the ribbon when he unzipped jacket during the fixture.

The Independent Commission did not accept Guardiola’s explanation that he had mistakenly worn the yellow ribbon, adding: “His actions were considered an act of defiance against the backdrop of repeated warnings.”

Guardiola had complained that the FA’s position on what was permitted to be worn is “confusing and contradictory.”

The Manchester City boss was fined £20,000 by the FA on March 9 and warned over his future conduct.