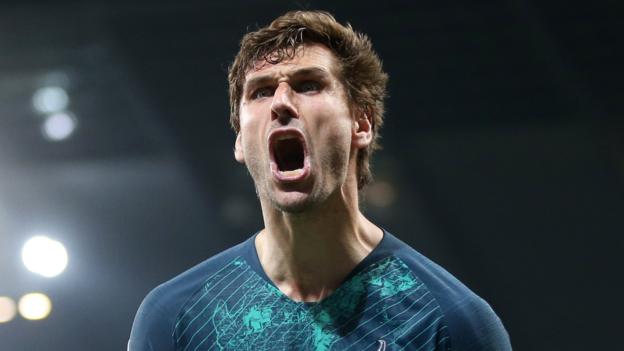 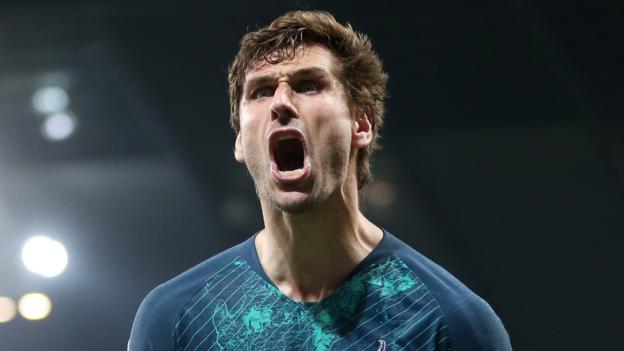 Tottenham overcame Manchester City in a classic encounter at Etihad Stadium to reach the last four of the Champions League for the first time.

Fernando Llorente’s goal, bundled in from a corner and confirmed by VAR 17 minutes from time, gave Mauricio Pochettino’s side victory on away goals on a night of tension, attacking quality and defensive frailty that ended City and Pep Guardiola’s quest for a historic quadruple of Premier League, Champions League, FA Cup and League Cup.

In a game of relentless drama, City even thought they had won it in injury time only for Raheem Sterling’s goal to be ruled out for offside by VAR.

Spurs were protecting a 1-0 lead from the first leg but an opening 21 minutes of chaotic brilliance saw City lead 3-2 on the night as both teams exchanged goals at will.

Sterling lit the blue touchpaper on a thunderous atmosphere when he curled in a precision finish from the edge of the area after only four minutes, but Spurs responded with a double from Son Heung-min as he took advantage of errors by Aymeric Laporte.

Bernardo Silva put Spurs level on the night with a shot that deflected past Hugo Lloris, then Sterling arrived on the end of the outstanding Kevin de Bruyne’s cross to score at the far post.

It left City effectively needing to win the second half and they looked on course when Sergio Aguero crashed home their fourth after De Bruyne sliced Spurs open before Llorente, on as a first-half substitute for injured Moussa Sissoko, bundled in from a corner via his hip – the goal given after a VAR check for handball.

In one last extraordinary twist, City thought they had snatched victory and Sterling a hat-trick, but emotions switched instantly as VAR had the final word once again, ruling that Aguero was in an offside position as Bernardo Silva diverted the ball into his path.

Spurs go on to face Ajax at the end of unforgettable encounter that left everyone involved stunned and breathless.

For Spurs, this was the rollercoaster night to top them all, their players and coaching staff dragged through every possible emotion before joining their supporters in joyous celebration at the final whistle.

After such a bright start, Pochettino’s side struggled to weather a City storm that culminated with Aguero putting them ahead in the tie, before Llorente’s goal renewed hope once more. They then had to deal with the gut-punch of Sterling’s stoppage-time goal, only to be hit by a wave of relief and joy at VAR’s final decisive intervention.

This was all done without striker and talisman Harry Kane, but once again Son rose to the responsibility, the classy South Korean typifying their bold approach with his superb movement and those two vital early goals.

Spurs goalkeeper Hugo Lloris – rightly criticised after his mistake gifted Liverpool victory at Anfield recently – also deserves huge praise after his penalty save from Aguero in the first leg and crucial stops from the Argentine and De Bruyne in the return.

This was a Spurs side, it should be remembered, who needed a draw in Barcelona to reach the group stage after a damaging defeat at Inter Milan and draw at PSV Eindhoven.

It is a tribute to the resilience of this squad – and Pochettino’s management of his resources – that they not only achieved that but now stand two games away from their first Champions League final.

They survived an all-out assault from City to achieve it. How they deserved those celebrations.

City’s fans gave their players a standing ovation after the chance of finally winning the Champions League – and claiming that haul of four trophies – eluded them on this sensational night.

And it was hard to criticise a team who, in this game, were scintillating going forward and a magnificent sight in full cry for long periods.

City’s downfall was the sloppy defending that let Spurs back in after Sterling’s opener, the normally reliable Laporte diverting Dele Alli’s pass into Son’s path for the equaliser before the Frenchman’s heavy touch led to Son’s second.

Guardiola’s players slumped to the turf as the final whistle sounded but they will not be allowed to stay down for long. It is back to business in the Premier League on Saturday. Their opponents? Spurs.

There will be no genuine consolation for City after a night such as this, but what stood out was the sheer relentless quality of De Bruyne, back to his best after an injury-troubled season, while Sterling continues to go from strength to strength.

Both men will be key to City’s bid to overhaul Liverpool in the Premier League title race before they meet Watford in the FA Cup final, but the disappointment of missing out on the trophy that would confirm the club’s status as a European superpower will remain.

‘Today is tough’ – what they said

Manchester City manager Pep Guardiola: “It is cruel but it is what it is and we have to accept it.

“I am so proud of the players and the fans. I have never heard noise like that since I have been in Manchester but football is unpredictable.

“Unfortunately, it was a bad end for us, so congratulations to Tottenham and good luck for the semi-finals.

“I support VAR but maybe from one angle Fernando Llorente’s goal is handball, maybe from the referee’s angle it is not.

“Today is tough and tomorrow will be tough too but the day after we will be ready.”

Tottenham manager Mauricio Pochettino: “It was unbelievable, the way it finished. I am so happy, so proud. My players are heroes to be here.

“In a moment many things happened in your head. The disappointment was massive but they changed the decision.

“That is why we love football. Today we showed great character and great personality. It was an unbelievable game.”

They do it all over again. City entertain Tottenham at Etihad Stadium on Saturday in the Premier League (12:30 BST).