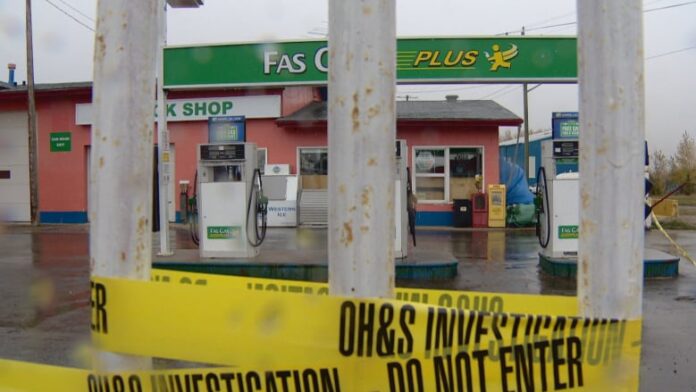 A Spruce Grove, Alta., man has been sentenced to seven years in prison in the 2017 death of a Thorsby gas station owner who was run over and killed as he tried to halt a gas-and-dash.

Sydlowski had been convicted of manslaughter and failing to remain at the scene of a fatal collision in the Oct. 6, 2017 death of Ki Yun Jo.

Jo was crushed and killed as he tried to stop Sydlowski from stealing $198 worth of fuel from the Fas Gas station in Thorsby, a town 70 kilometres southwest of Edmonton.

In handing down his sentence Friday, Justice John William Hopkins said the impact of Sydlowski’s crimes on the Jo family and wider community have been devastating.

“It goes without saying that this is a tragic situation. The victim impact statement demonstrates the horrible impact that this has had on the family,” Hopkins said.

Hopkins said Sydlowski has expressed “sorrow and remorse” for his crimes and spared the family the pain of enduring a trial by pleading out.

The judge acknowledged Sydlowsk’s history of substance abuse and his desire to move past his criminal history.

However, Hopkins said the offender’s prospects of rehabilitation are low. Sydlowski has a record of more than 30 convictions dating back to 2009.

“His criminal record is extensive,” Hopkins said. “It is apparent that he has chosen a life of crime up to this date.

“Hopefully his time in prison will change his ways and allow him to address his issues.”

Sydlowski has already served 769 days in custody. With enhanced credit for time served, he will remain in prison for nearly four more years.

Appearing remotely from the Edmonton Remand Centre, Sydlowski hung his head as the judge delivered his sentence.

Sydlowski was initially charged with second-degree murder, but the 29-year old pleaded guilty to the lesser offence of manslaughter last month.

The Crown recommended a sentence of six to eight years. Sydlowski’s defence lawyer suggested the sentence should be at the lower end of the Crown’s recommendation because of his client’s guilty pleas.

According to an agreed statement of facts, on the day of Jo’s death, Sydlowski stole a cube van from a Spruce Grove flooring business.

Later that afternoon, he pulled the stolen van into the Thorsby Fas Gas to fill up. Jo was working inside the convenience store at the time.

When Jo realized the driver was going to pull away without paying, he ran outside to confront him.

Sydlowski then fled the Fas Gas with Jo clinging onto the mirror. He drove for about two blocks, aware that the 54-year-old convenience store owner was hanging on to the vehicle.

Sydlowski repeatedly swerved the vehicle before Jo was tossed to the ground and run over by the van’s rear wheels.

Court heard Jo died at the scene after suffering multiple blunt force injuries — a skull fracture, a broken neck and internal bleeding, despite the efforts of a retired EMT, a registered nurse and a firefighter who tried to administer first aid.

Sydlowski was charged the following spring while incarcerated at the Edmonton Remand Centre on other charges.

During the August hearing, Sydlowski told court he accepts responsibility for Jo’s death. He apologized to the man’s distraught family as they watched the online court proceedings.

In a victim impact statement read by the Crown, Jo’s daughter said he was “the most loving person in the world” and a man who always took care of his family.

Ka Yung Jo said her father’s death continues to haunt her. She hasn’t been able to stop seeing him dead on the road.

“My dad was senselessly and cruelly taken away from me,” said Ka Yung Jo in her statement. “Since then, my world has changed completely.”

Ka Yung Jo said that she, her mom and her brother had to take over the gas station and had a difficult time running the business. Ultimately, they ended up selling it. Haunted by painful memories, they eventually moved away from the town.

Her mom and her brother have also struggled, she said. Her dad’s death left her family financially unstable and heartbroken. It also made her angry.

“What I hated most was the man who ended my dad’s life,” she said.  “He killed my father and ruined me, my life, my family and everything.”

Shortly after Jo’s death, the Alberta government introduced legislation requiring drivers to prepay before filling up at gas stations.

Ka Yung Jo said she hopes the law saves the lives of other retail workers and that the court case becomes an example of how the justice system can work.

“This sentence will not certainly bring my father back to us, but there is a hope it will keep our world safer.”