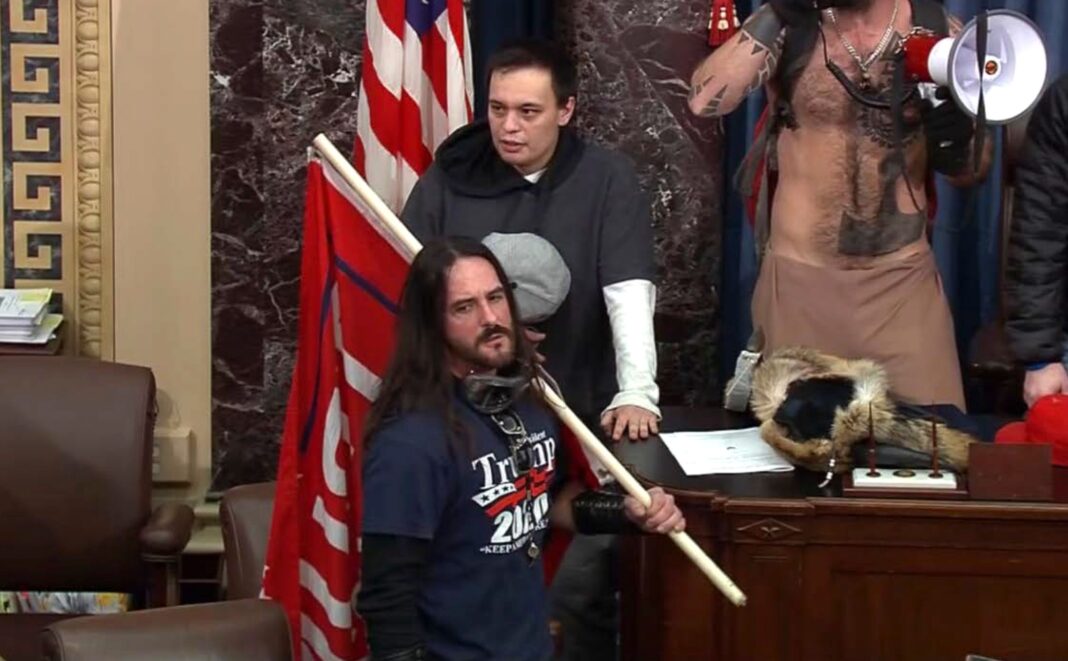 CHICAGO (AP) — A Florida man who breached the U.S. Senate chamber carrying a Trump campaign flag is scheduled to become the first Jan. 6 rioter sentenced for a felony in a hearing that will help set a benchmark for punishment in similar cases.

Prosecutors want Paul Allard Hodgkins to serve 18 months behind bars, saying in a recent filing that he, “like each rioter, contributed to the collective threat to democracy” by forcing lawmakers to temporarily abandon their certification of Joe Biden’s election victory and to scramble for shelter from incoming mobs.

Video footage shows Hodgkins, 38, wearing a Trump 2020 T-shirt, the flag flung over his shoulder, and eye goggles around his neck inside the Senate. He took a selfie with a self-described shaman in a horned helmet and other rioters on the dais behind him.

His sentencing Monday in Washington could set the bar for punishments of hundreds of other defendants as they decide whether to accept plea deals or go to trial. Hodgkins and others are accused of serious crimes but were not indicted, as others were, for roles in larger conspiracies.

A lawyer for Hodgkins, who pleaded guilty last month to one count of obstructing an official proceeding, asked U.S. District Judge Randolph Moss not to impose a prison sentence, saying the shame that will attach to Hodgkins for the rest of his life should be factored in as punishment.

“Whatever punishment this court may provide will pale in comparison to the scarlet letter Mr. Hodgkins will wear for the rest of his life,” Patrick N. Leduc wrote in a recent filing, citing a Nathaniel Hawthorne novel in which a woman accused of adultery is forced to wear a letter “A.”

The filing argues that Hodgkins’ actions weren’t markedly different from those of Anna Morgan Lloyd — other than Hodgkins stepping onto the Senate floor. The 49-year-old from Indiana was the first of roughly 500 arrested to be sentenced. She pleaded guilty to misdemeanor disorderly conduct and, last month, was sentenced to three years of probation.

Hodgkins was never accused of assaulting anyone or damaging property. And prosecutors said he deserves some leniency for taking responsibility almost immediately and pleading guilty to the obstruction charge, which carries a maximum 20-years prison sentence.

But they also noted how he boarded a bus in his hometown of Tampa bound for a Jan. 6 Trump rally carrying a rope, protective goggles, and latex gloves in a backpack — saying that demonstrated he came to Washington prepared for violence.

On the day, he walked through grounds already littered with smashed police barriers and broken windows, evening passing police officers and others injured as the crowd surged toward the Capitol, prosecutors said.

“Time and time again, rather than turn around and retreat, Hodgkins pressed forward,” the government filing said.

Leduc described his client as an otherwise law-abiding American who regularly volunteered at a food bank despite living in a poorer part of Tampa. In addition, he noted that Hodgkins had been an Eagle Scout.

His actions on Jan. 6 “is the story of a man who for just one hour on one day lost his bearings … who made a fateful decision to follow the crowd,” the attorney said.

“The court has a chance to emulate Lincoln,” he wrote.