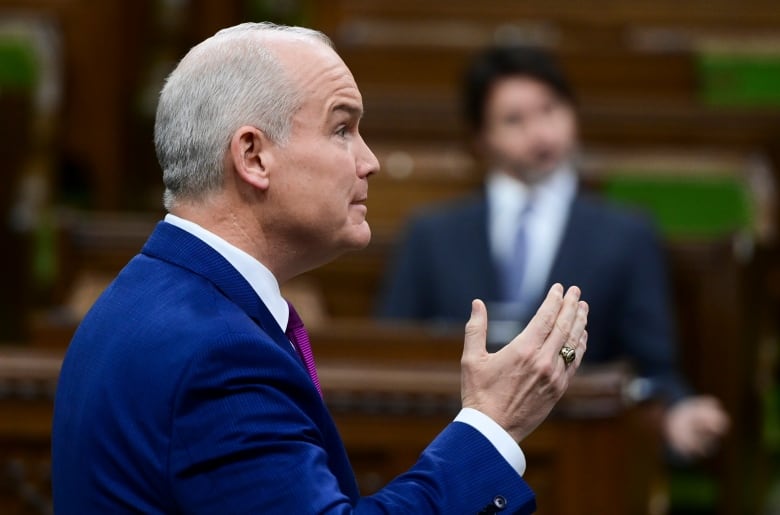 The Liberals and New Democrats are holding duelling virtual conventions this week, with party activists debating which policies will appeal the most to the voters both parties are courting ahead of the next federal election.

But while the New Democrats are working out how best to break out beyond their traditional base of support, the Liberals are hoping the NDP stays just where it is.

That’s because the Liberals would be the heavy favourites to win an election if a vote were held today. The NDP, on the other hand, likely would find itself no further ahead — and maybe much further behind, if the next election results in a Liberal majority government.

According to the CBC’s Canada Poll Tracker, an aggregation of all publicly available polling data, the Liberals are leading with 35.8 per cent support nationwide. The Conservatives trail in second with 29.8 per cent and the NDP is in third with 18.1 per cent.

The Bloc Québécois and Greens have 6.9 and 6.4 per cent support respectively, followed by the People’s Party at 1.7 per cent.

That polling landscape isn’t vastly different from the results of the 2019 federal election. But those extra three percentage points going to the Liberals at the expense of the Conservatives might be just enough to inch the Liberals past the 170-seat threshold needed for a majority in the House of Commons.

The Poll Tracker estimates that the Liberals likely would come up just short if an election were held today, with around 169 seats. But there are more than enough close races that could put them over the top. The Conservatives would take around 110 seats, while 31 seats would go to the Bloc, 26 to the NDP and two to the Greens.

The only significant shift since the last election would be a net exchange of about a dozen seats between the Liberals and the Conservatives.

But with the Conservatives now polling just under 30 per cent — their historic floor — there might not be many more voters for the Liberals to find in that direction.

That means the Liberals could use a few more NDP votes to get them where they want to be.

CBC News will have coverage of the Liberal and NDP policy conventions on CBC News Network, CBC Radio’s The World at Six, The World This Weekend and World Report, The National and CBC.ca.

The Liberals have been leading in the polls without interruption since the beginning of the COVID-19 pandemic. Voting intentions have been largely unchanged since the end of last summer, although the margin between the Liberals and Conservatives has widened slightly from about four or five points to about five or six points.

That’s due as much to the Conservatives’ own struggles under their new leader Erin O’Toole as it is to anything the Liberals have done.

It puts Prime Minister Justin Trudeau in a tantalizing position. His party has been straddling the 170-seat threshold in the Poll Tracker since early August, putting a majority government just in reach — but also opening up the possibility of the Liberals taking a gamble on an early election without hitting the jackpot.

But the party’s national lead in the polls is wider than it looks because of how it breaks down across the country.

The Liberals have been consistently ahead of the Conservatives by about 10 points in Ontario and enjoy a wider lead over the Bloc Québécois in Quebec than they did in the 2019 election. This means the Liberals would very likely hold — and possibly grow beyond — the 114 seats they won in these two provinces in the last election.

In Atlantic Canada, Liberal support may already be maxed out, giving them few prospects for gains. The party is estimated to be ahead by at least 10 points in all four Atlantic provinces but it can’t count on wrenching more than a seat or two back from the opposition parties, which hold a combined six ridings in the region.

That leaves the Liberals looking to Western Canada for the top-up they need to reach 170.

The Liberals’ lead in British Columbia is important for the party. They are up six points in the province over the last election result, enough to net them a half-dozen extra seats. That alone covers about half of the 13 seats that separated the Liberals from a majority win in 2019.

The unpopularity of provincial premiers Jason Kenney in Alberta and Brian Pallister in Manitoba might help the Liberals steal a few extra seats in those provinces. On balance, however, the Liberals likely would find it easier to pad their seat count by making gains in Ontario and Quebec than by looking for a handful of upsets in the West.

Signs of growth and stagnation for the NDP

A handful of upsets might be a more achievable goal for the New Democrats — who, after seeing an increase in support from a low last spring, have seen their numbers stabilize in the polls.

It also means their likely seat haul has settled somewhere a little north of 25 seats — just a few more than they currently hold.

At the moment, the party’s best prospects seem to be where their provincial cousins have enjoyed success. The federal NDP experienced a boost in support in B.C. after John Horgan secured a majority government for his provincial NDP in October’s election. That bump has been sustained, meaning Jagmeet Singh’s NDP is challenging the Conservatives for second place in the province. That opens up a few seats to the New Democrats.

Alberta and Manitoba, where the provincial New Democrats have edged ahead of Kenney’s United Conservatives and Pallister’s Progressive Conservatives in polls, also hold some promise for the federal NDP, if only for a seat or two.

Singh’s New Democrats have inched up in the polls in Ontario, but they will face a challenge from the Greens in the Toronto seats the NDP lost to the Liberals in 2015 (and again in 2019).

Quebec remains a problem area for the New Democrats. At under 11 per cent in the polls, the NDP is where it was in 2019 when the party won only a single seat in the province.

Atlantic Canada is also looking like barren ground for New Democrats. The party is polling no better than it did in the last election, when it won just one seat in Newfoundland and Labrador. The party is, at best, vying for second with the Conservatives in that province, as well as in Nova Scotia.

In Prince Edward Island and New Brunswick, meanwhile, the Greens have supplanted the NDP in their traditional third spot.

Setting the stage for whenever the show will begin

These numbers describe what has been a steady public opinion environment for the past few months. The virtual party conventions aren’t likely to do much to change that.

Instead, the most important variables are vaccines and variants. The state of the pandemic is the biggest wild card in any electoral calculation. It might be well into the summer before anyone gets comfortable with the idea of holding an election.

Whenever the election does happen, the Liberals will be hoping that their handling of the pandemic — and, who knows, maybe even a policy idea or two that comes from this week’s convention — will be enough to win them the majority they lost in 2019.

The New Democrats will do whatever they can to prevent that from happening (and the Conservatives wouldn’t mind some help from the orange team, either).

In the end, the next election likely will be decided between Trudeau and O’Toole, not Trudeau and Singh. But the NDP will be competing with the Liberals for a lot of the same voters — if not always the same seats. And the success of one partly likely will mean the failure of the other.