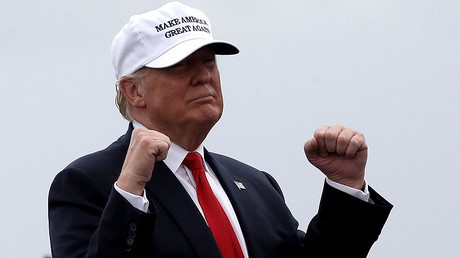 By Terry Paul
July 2, 2017
President Trump renewed his attacks against CNN, which he has repeatedly called “fake news,” on June 27, after CNN retracted a story about ties between a Trump associate and a Russian investment fund. (Jenny Starrs/The Washington Post)

Another bizarre tweet from the president of the United States.

Another round of outrage and condemnation from lawmakers.

President Trump on Sunday morning posted to Twitter a doctored video clip that showed him slamming a man — with “CNN” superimposed on his head — to the ground. In the video, Trump then throws punches at the man’s head, before walking away.

Trump appended the tweet with two hashtags: “#FraudNewsCNN” and “#FNN.”

The video, which reportedly originated on Reddit last week, was quickly blasted on social media as not befitting of the office of the president and appearing to promote violence against CNN’s journalists. Trump has long had an antagonistic relationship with the cable news network, often accusing it of being “Fake News.”

On ABC’s “This Week” on Sunday, homeland security adviser Tom Bossert pursed his lips when shown the tweet on air, then defended Trump, saying he was communicating directly in a “genuine” way to Americans.

“I think that no one would perceive that as a threat,” Bossert told “This Week” host Martha Raddatz. “I hope they don’t.”

Lawmakers felt otherwise, taking to Twitter to blast Trump for, again, tweeting “crude, false, and unpresidential content.” Many defended the free press as critical to the nation’s democracy, especially with Independence Day on the horizon.

.@realDonaldTrump promoting violence against the press is a disgrace, a threat to the presidency & our democracy. We must all speak out. https://t.co/WfHeLuAjVt

The President of the United States of America encouraging violence against free & independent press on Independence Day weekend. #UnAmerican https://t.co/sdsXSes5gb

Violence & violent imagery to bully the press must be rejected. This #July4th, celebrate freedom of the press, guardians to our democracy

.@POTUS posts mock video of him attacking press, even after a GOP candidate did exactly that. Where will his downward spiral take us?

This deranged fantasy should be rejected by all Americans. The free press is not the enemy of the people, but the people’s best friend. https://t.co/Xjoy8wOYGs

I am calling on EVERY @HouseGOP Member of Congress to condemn this. You were elected to be a check on power. Check it, or you condone it. https://t.co/ZGR58Ufhww

The modern mode of communication is not the issue. It’s the crude, false, and unpresidential content. https://t.co/liEYbhkpnx

Good day to read @Bencjacobs statement on the need for a free press and a civil national discourse without violence. https://t.co/f6dlAkqOZi https://t.co/ZO9XH600pC

CNN struck back at Trump, saying in a statement that he had engaged in “juvenile behavior far below the dignity of his office” when he should have been preparing for an upcoming overseas trip.

“It is a sad day when the President of the United States encourages violence against reporters,” the statement read. ” … We will keep doing our jobs. He should start doing his.”

Trump’s latest outrage-inducing tweet came just days after he attacked the hosts of MSNBC’s “Morning Joe” on Twitter with shocking and graphic language that was widely condemned by both Republican and Democratic lawmakers. The following day, “Morning Joe” hosts Mika Brzezinski and Joe Scarborough responded in a guest column that questioned whether Trump was fit to be president.

…to Mar-a-Lago 3 nights in a row around New Year’s Eve, and insisted on joining me. She was bleeding badly from a face-lift. I said no!

“Obviously, I don’t see that as an appropriate comment,” House Speaker Paul D. Ryan (R-Wis.) said Thursday. “What we’re trying to do around here is improve the civility and tone of the debate, and this obviously does not do that.”

Trump has long had a contentious relationship with the media. Throughout his campaign, he regularly lashed out at the press, singling out news outlets as being “dishonest” and at one point barring The Washington Post from covering his events. Since his election, he has accused, without providing evidence or deeper arguments, certain media outlets of publishing “fake news.” Earlier this year, Trump dubbed the media “the enemy of the American People!” and broke with recent presidential tradition in skipping the White House correspondents’ dinner. Instead, he held a Pennsylvania rally that day — where he railed against the media.

The Post’s Fact Checker recently compiled a timeline of every Russia story that Trump alleged was a hoax by Democrats and found that Trump often contradicted his own past statements or statements from members of his administration.

CNN has been a frequent target in Trump’s tweets, which have described the network as everything from “unwatchable” to “the worst.”

Trump attacks MSNBC and CNN, defends his use of social media in series of tweets

Trump’s latest attack on Mika Brzezinski is laced with sexism