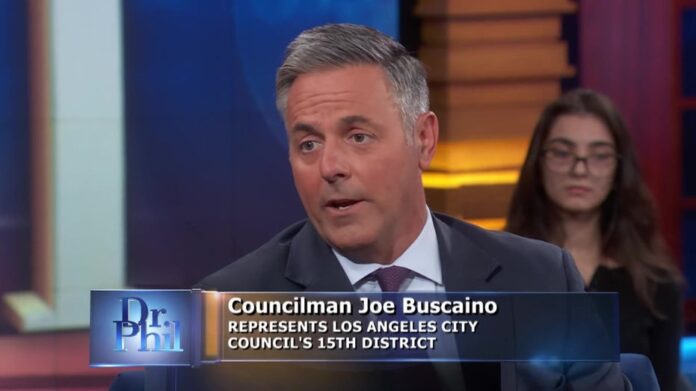 A Los Angeles city council member told Dr. Phil on Friday that kids have to “step over needles, human waste,” and deal with people exhibiting “psychotic behavior” on their way to school due to the homeless crisis in California.

Dr. Phil explained how a recent piece of local legislation to address the dangerous homeless tent cities has caused outrage among activists.

“At a recent Los Angeles city council meeting, members voted to prohibit homeless people from setting up tents within 500 feet of schools and daycare centers,” Dr. Phil summarized. “Protesters at one point shut down the meeting, angered by new restrictions that will expand the number of locations where sleeping and camping are prohibited.”

Buscaino went out of his way to say this is not about bigotry against homeless people, but recognizing the need to protect certain vulnerable public spaces in society.

“So, I’m saying again, it’s not a crime to be homeless, but these are sensitive spaces we have to protect, the most sensitive spaces among us. Playgrounds, beaches, libraries, parks – and have some accountability for those who are in these spaces,” he said.

Dr. Phil also spoke to TikTok star Franky Bernstein, who has made multiple videos chronicling his encounters with homeless crime in Venice, California.

Dr. Phil praised Bernstein for not just recording the problem, but for using his own time to take part in actually solving it.

Bernstein said, “I’ve dealt with my own fair share of addiction and mental health problems, just like I’m sure everybody in this room has, or a family member, so I totally get it.”

He said that the homeless crisis is more a matter of will for the American public than a matter of money, claiming, “One of the main problems as a civilian is that most people don’t do anything.”

He added, “We could have all the money in the world to solve this problem, but if we don’t have enough people showing up to volunteer, it’s not really going to work.”

Elsewhere in the episode, Dr. Phil dropped some alarming stats about homelessness in California, such as the claim that the state has “more than half of all unsheltered homeless people in the United States, and the highest number of homeless encampments.”

He also warned that “this problem is not going away, it seems to be growing, if anything, I think maybe inflation is making it even worse.”