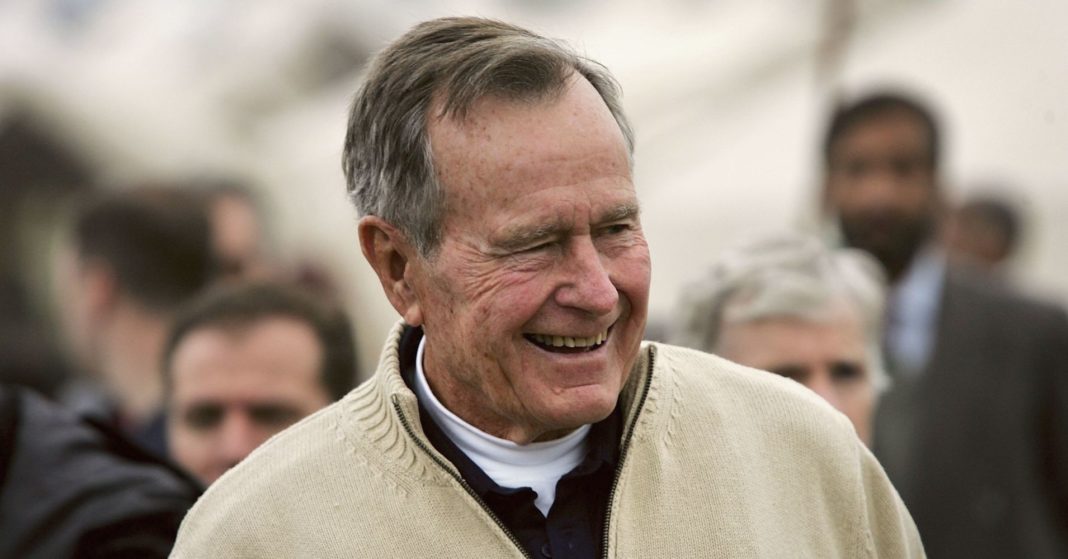 Former President George H.W. Bush presided over the demise of the Cold War, punctuated by the fall of the Berlin Wall. At 94, he had lived longer than any other U.S. president. Here are some of his noted quotations.

“This is America … a brilliant diversity spread like stars, like a thousand points of light in a broad and peaceful sky.” — Acceptance speech at Republican National Convention, Aug. 18, 1988.

“I will never apologize for the United States — I don’t care what the facts are. … I’m not an apologize-for-America kind of guy.” — Comments during an Aug. 2, 1988, campaign stop about the USS Vincennes’ mistakenly downing a commercial Iran Air flight, killing 290 civilians.

“America is never wholly herself unless she is engaged in high moral principle. We as a people have such a purpose today. It is to make kinder the face of the nation and gentler the face of the world.” — Inauguration speech, Jan. 20, 1989.

“I do not like broccoli. And I haven’t liked it since I was a little kid and my mother made me eat it. And I’m president of the United States and I’m not going to eat any more broccoli.” — News conference, March 22, 1990, days after word spread that Bush had banned broccoli from Air Force One.

“We’re going to keep trying to strengthen the American family. To make them more like the Waltons and less like the Simpsons.” —1992 Republican National Convention.

“My dog Millie knows more about foreign affairs than these two bozos.” — During his unsuccessful 1992 re-election campaign against Bill Clinton and Al Gore.

“Losing is never easy. Trust me, I know something about that.” —Jan. 5, 1993, speech at West Point, two months after his failed re-election bid.

“In the wake of the Cold War, in a world where we are the only remaining superpower, it is the role of the United States to marshal its moral and material resources to promote a democratic peace. It is our responsibility, it is our opportunity to lead. There is no one else.” —Jan. 5, 1993, West Point speech.

“I’m not a very good one to give advice; but just don’t let the critics discourage you or push you off course. … Your success is now our country’s success. I am rooting for you.” — Handwritten note dated Jan. 20, 1993, to Clinton just before his inauguration.

“Still hard to believe I had the honor to serve as President.” — Tweet on Jan. 20, 2014, the 25th anniversary of his inauguration.