‘Kill them all,’ GOP congressman says of ‘radicalized Islamic suspects’ after London attacks 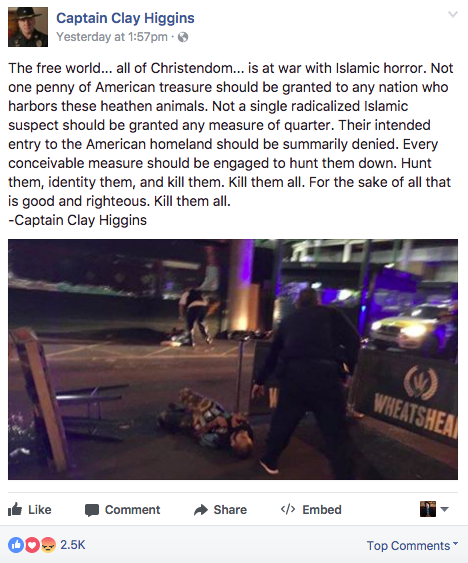 A freshman congressman from Louisiana took to Facebook on Sunday to call for “every conceivable measure” to be used against “radicalized Islamic” terrorism.

“Hunt them, identify them, and kill them,” Rep. Clay Higgins (R) said. “Kill them all. For the sake of all that is good and righteous. Kill them all.” Higgins, an Army veteran and retired sheriff, rose to Internet fame for a series of “Crime Stoppers” videos, and won a safe seat last year after former congressman Charles W. Boustany Jr. (R-La.) vacated it to run for Senate. (Backing from the National Rifle Association didn’t hurt.) In Congress, he’s kept a relatively low profile, passing a popular bill to crack down on fraud in the Department of Homeland Security, and voting with leadership on most bills. He’s also kept up an active social media presence — more than 200,000 people follow him on Facebook — with Tabasco-powered riffs on the news, heavy on references to terrorism.

In one get-out-the-vote video from May, he fired off a few rounds and implored voters to help Republicans beat the “socialists.” Earlier, in a reaction to the use of the “Mother of All Bombs” in Afghanistan, he told viewers that a Green Beret killed by the Taliban would “live forever” in the service of Jesus Christ.

“Welcome to your new reality,” he said. “You can run but you cannot hide. America has been reborn.”