Kids in hotels, separated families: The reality of being a homeless parent 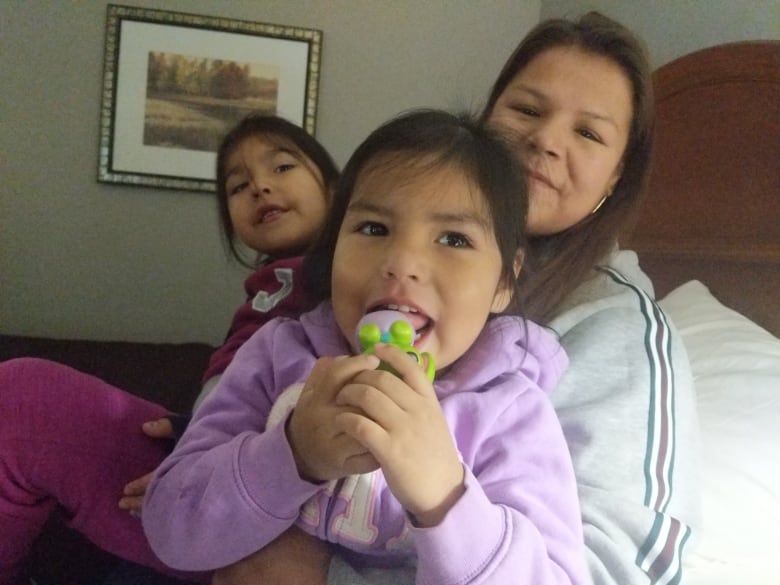 Angeline Whitefish focused on the judge’s facial expressions and the tone of his voice as he reacted to the pleas of other desperate citizens.

She, like the strangers whose personal dramas she was watching unfold, had found herself among the daily stream of conflict and struggle that flowed through the Saskatoon Court of Queen’s Bench on Oct. 15, 2019.

Whitefish was worried other cases — the farming brothers fighting over their cattle brand, the couple fighting the bank over their second mortgage — would put the judge in a bad mood before it was her turn. She didn’t know where she would be sleeping that night if the judge ruled against her.

Whitefish was homeless. She had been living in a hotel for about two weeks with her two daughters, Paisley, 3, and Elle, 4, after she was evicted from her home after falling behind on rent.

“I’ve had numerous times I’ve went to sleep crying and feeling like I couldn’t help my kids because there was nowhere else for us to go,” Whitefish said on the fourth day at the hotel.

She’s one of 26 women in Saskatoon in the past six months who have found themselves living in hotels with their children. Workers from social support services say not all homeless parents get to stay with their children — that income support workers are suggesting they split up their families by putting their children in a crisis nursery while they stay in shelters or on somebody’s couch.

Whitefish said she put her daughters in the crisis nursery when she first became homeless, then a worker from the provincial income assistance program suggested she stay at a shelter. Later, the ministry paid for her to stay at a hotel.

The Ministry of Social Services denied it is advocating for families to be separated and stressed that “there is no gap in service,” adding that anyone who needs help should come to the ministry.

Dionne Miazdyck-Shield is the executive director of the Saskatoon Society for the Protection of Children, which runs the crisis nursery.

She has noticed an increase in the number of parents bringing their children to the nursery because they are homeless — about 20 families in the past couple of months.

In mid-October, almost all of the crisis nursery’s beds were full with children whose parents are homeless. Almost all had been evicted for falling behind on their rent.

Miazdyck-Shield said they usually don’t get to stay in hotels with their children.

She and workers for other social services say the closure of Mumford House, a 36-bed shelter for women and children, is a major contributor to the number of women seeking shelter.

Children cannot stay at short-term emergency shelters like the Lighthouse. The YWCA shelter for women is consistently full.

Miazdyck-Shield said many families simply cannot afford to pay their rent with the amount they receive through social assistance. A single parent with two children, she said, would be getting about $2,000 a month including social assistance and the child tax benefit, plus money to put toward utilities.

‘We are promoting families being split up’: Housing worker

The crisis nursery is not a shelter and not funded as one. Miazdyck-Shield said she is worried about the lack of family shelter beds.

“I’m hoping that the government will step up and ensure that families are safe and together during periods of homelessness,” said Miazdyck-Shield.

Shaun Dyck, the executive director of the Saskatoon Housing Initiatives Partnership, said he knows of four families in the past couple of weeks who have been split up because the parents had to stay in a shelter while the children were in the crisis nursery.

“We are promoting families being split up during a crisis,” Dyck said. “That’s hardly a state of empathy.”

The Ministry of Social Services denies this. It said it housed 26 women with children in hotels the past six months, and helped 24 of them to find long-term accommodation.

It said the average length of their stay is three to four days. Hotel stays are paid for when other emergency shelter services are not available or considered unsuitable, it said.

Jeff Redekop is the director of Income Assistance Service Delivery at the ministry.

Asked when it would be considered suitable for a parent to have to stay in a shelter while their child was in the crisis nursery, he said that would be a choice for the parent and not the Income Assistance worker.

“We would not advocate separating children from their families. Help is available through the ministry and I want that to be clear.”

Redekop said there are currently no efforts underway within the ministry to establish a family shelter in Saskatoon.

“If the community developed that kind of resource I’m sure the ministry would make referrals to that organization,” he said, adding that the income support program could contribute to the cost.

Whitefish stayed at Mumford House about 10 years ago while she was homeless. The centre had more of a family environment.

Her children had toys to play with there and she didn’t have to worry about them being too loud.

When Whitefish was faced with being split up from her children, by staying in a shelter while they went to the crisis nursery, she contacted her First Nation for support.

She said the Big River First Nation paid for her to stay in a hotel for five days.

When the money from the band ran out, the Ministry of Social Services agreed to pay for her accommodation in a hotel near the Saskatoon airport. She said she was told on the fourth day she would be checked out the following morning.

Ultimately, the ministry extended her stay until Tuesday.

In the meantime, Whitefish was waiting to take the housing company that evicted her to court.

Whitefish had a payment plan with Camponi Housing at the time of her eviction, set up through the Office of Residential Tenancies, to allow her to pay her arrears in smaller increments after she got behind on her rent.

Camponi is a non-profit affordable housing corporation. Whitefish sent a cheque for $400 on the day the payment was due — Sept. 20, but the company decided that was too late. It cashed the cheque but did not reverse the eviction, which is legal.

Whitefish was given 10 days to get out.

An appeal was filed and a hearing date was set at the Saskatoon Court of Queen’s Bench on Oct. 15, the same day she had to be out of the hotel.

Whitefish’s niece wasn’t available to babysit, so she arrived in court with her two girls, who wore puffy pink jackets and ponytails in their hair. A worker for the Saskatoon Indian and Metis Friendship Centre was by their sides.

The courtroom is a quiet place. Whitefish did her best to keep her girls from shuffling and whispering, but after a while she took them out into the hall.

Finally, it was Whitefish’s turn to come before the judge.

She approached the podium where the lawyers usually stand, looking small in the vast courtroom of varnished wood panels. The judge sat above her and strangers watch from behind. She was nervous, but her voice didn’t shake.

Whitefish told the judge about her situation. Justice Brian Scherman described it as “unique” and questioned the legality of the eviction.

“I don’t think your client is entitled to exercise that writ of possession,” Scherman said to Camponi’s lawyer.

Scherman suggested it would be reasonable for Camponi to return the keys to Whitefish without being ordered to, “because I think your client acted prematurely.”

Whitefish left the courthouse on a high.

A chance to speak up

“A lot of Indigenous people are afraid to speak up and to come to court and go to the extreme to appeal,” said Whitefish.

She spoke about growing up in foster care and not being allowed to speak up about anything.

“I’m pretty happy about being able to come out and speak for myself.”

The company had agreed to return her keys by the next afternoon.

Toby Esterby, executive director of Camponi Housing and Sasknative Rentals Inc., said the company is going to try to find a way to verify when someone has sent a cheque, as Whitefish did.

“As you can well imagine we get told that an awful lot and it often proves untrue,” said Esterby.

“So if we rely on that as a business our arrears … you know, it would be detrimental to our organization.”

Esterby said the company has made sure Whitefish’s belongings were safe and it has now connected her with other services that will help her avoid getting behind on her rent again. He said there were other reasons behind her eviction which he cannot discuss publicly.

Asked why Camponi waited until after the appeal was heard to allow Whitefish to return, he said the judge’s input had provided “context.”

He said the decision to evict Whitefish was not a mistake and that the corporation did its “absolute best” for Whitefish.

“We have to do what’s right for the sustainability of the organization. The need in the city of Saskatoon is extensive,” he said.

“It’s a hard decision to make but we know that there’s a family waiting in line that that really needs a home.”

He said a credit has been applied to her ledger.

“It’s a bit of a conflicted way to look at it but, you could look at this as the instigating factor that has positioned this woman in a little bit better place,” Esterby said. “Now she has a little bit of an umbrella of supports around her.”

On Oct. 17 Whitefish was home, preparing to take her daughters to the library.

The word “HOME” was written on the splashback above the stovetop in her kitchen.

There was one reason, in particular, Whitefish was excited to be home.

“It’s Elle’s birthday on Oct. 30 so she’s quite excited to be home,” said Whitefish.

“We’re going to have a birthday party like we usually do with her friends over, a costume birthday.”