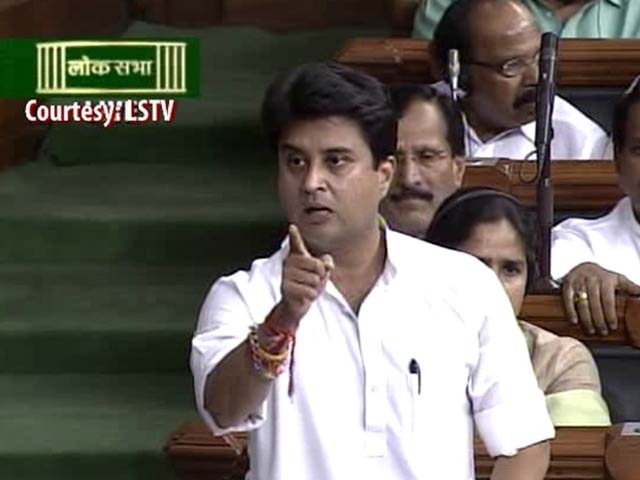 The BJP claimed that Congress used gangajal to purify the trauma centre after a Dalit BJP MLA went ahead and inaugurated it a day before Scindia was scheduled to officially open the building.

Congress MP from Guna, Jyotiraditya Scindia on Tuesday offered to resign from the House membership if the BJP proves that he made “anti-Dalit” comments. He also filed a privilege motion against two BJP MPs for accusing him of making objectionable remarks at an event in Madhya Pradesh.

On Monday, during Question Hour, BJP MPs Shri Virendra Kumar and Shri Manohar Utwal claimed that Scindia made insensitive comments and participated in “anti-Dalit activities” at an inauguration of a trauma centre in Madhya Pradesh.

Rejecting the allegations as “totally baseless and false”, Scindia added that it was a “serious affront” to his dignity as a respected member of the House. “Furthermore, the accusation are also blatantly misleading for other Members of the House and the million of people who watch Lok Sabha proceedings on television across the country,” he said in the privilege motion.

The BJP claimed that Congress used gangajal to purify the trauma centre after a Dalit BJP MLA went ahead and inaugurated it a day before Scindia was scheduled to officially open the building. The issue also rocked the assembly proceeding in Madhya Pradesh on Monday after BJP MLAs created a ruckus.

The Congress claimed that BJP was wrongly attributing its party worker’s objectionable comments to Scindia. The worker was expelled for six years from the party as the Congress doesn’t support any statement that hurts a particular community, Leader of Opposition Ajay Singh said on Monday.

“A Congress worker made an insensitive and unacceptable statement with regard to the function. The Congress party immediately expelled him from the party. Now, the BJP, with malafide intent to damage my reputation, is attributing his statement to me and also accusing me of sprinkling gangajal at the site, both of which are completely baseless lies and made-up falsehoods,” Scindia reiterated in his letter.