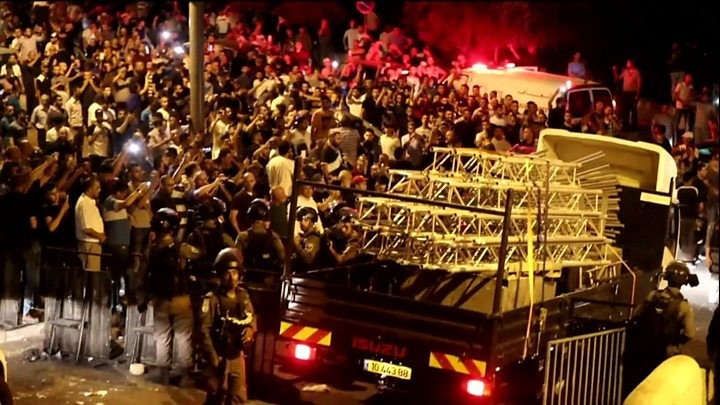 Muslim leaders have lifted a boycott of a key holy site in East Jerusalem after Israel removed the last of security measures which had led to uproar.

They urged Palestinians to re-enter the compound on Thursday for the first time since the crisis erupted two weeks ago.

The last remnants of Israel’s recently installed security apparatus was taken away on Thursday morning.

Palestinians had fiercely objected to the measures introduced after the killing of two Israeli policemen.

They had refrained from entering the Old City complex known to Muslims as Haram al-Sharif and to Jews as the Temple Mount in protest over what they saw as an Israeli attempt to exert control over the contested site.

Mass prayer gathering had been held in the street outside the Old City walls and near-daily clashes between Israeli security forces and demonstrators have taken place since the metal detectors were introduced in the wake of the killings of the policemen near the site on 14 July.

Four Palestinians were killed and three Israeli civilians stabbed to death by a Palestinian who said he was avenging Israel actions at the site.

Israel said the security measures were necessary because the weapons used to kill the police had been smuggled on to the compound.

It has said it will introduce less obtrusive security measures over the next six months.