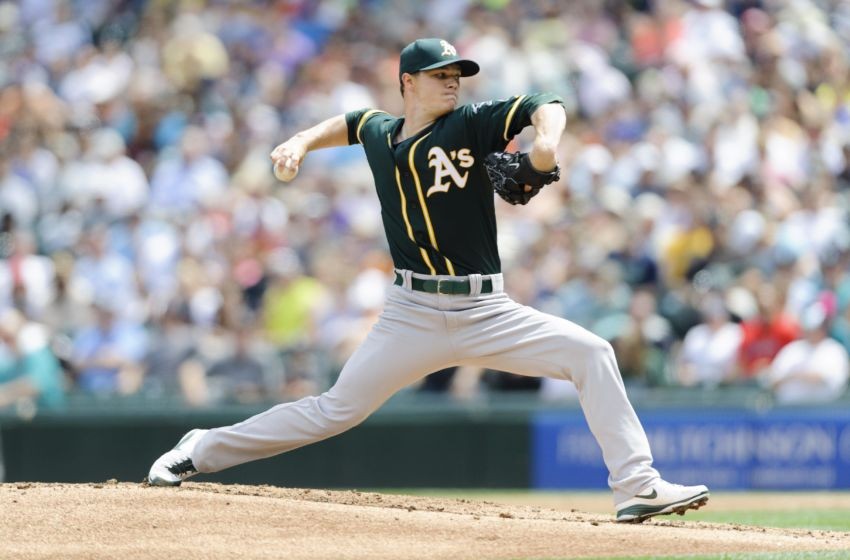 This is a simulation completely inspired by Rob Huff of Bleed Cubbie Blue. See his piece here, of mock trade discussions between the Cubs and Detroit Tigers.

Over the next few days, I will be the best Billy Beane I can be as I negotiate with representatives from our SB Nation sister sites regarding a possible deal for Oakland’s ace, Sonny Gray. The transcripts from the initial round of negotiations will be posted, and once I have each final offer in hand, I will make my decision on which to accept.

First up is the Seattle Mariners. Anders Jorstad, staff writer for Lookout Landing, will represent his site and his team as Jerry DiPoto’s stand in. Let’s begin.

Billy Beane: Hey, Jerry, it’s been a while since our last chat, how ya been? I’ve noticed it’s been a few days since your last trade. You must be going into withdrawal. I think I know just the cure, both for that and for your struggling rotation.

Sonny Gray has plenty of suitors, for a good reason. He is easily the best pitcher available right now, and he’s in very high demand. You know as well as I do that Felix hasn’t been Felix this year, and the rest of the rotation has struggled to stay healthy (or pitch well). Sonny would fit perfectly in your rotation for the rest of this year and the next two.

He won’t come cheap. We’re looking for a package similar to what the White Sox received for Jose Quintana – two top-notch headliner prospects, and one or two more secondary pieces. While your system doesn’t necessarily have an Eloy Jimenez, I think we could still work something out. Other pieces from our roster are also available, for the right price. Let me know if you have interest, and if so, send me a few offers. Happy deadline!

As you have guessed, I am itching to make a trade. This team is struggling to make a playoff push with Sam Gaviglio serving in the rotation. Plus Gray could be a part of the team’s winning core for the next two years.

Our only top 100 prospect is Kyle Lewis, who we’d prefer not to give up if we can help it. Although we need pitching much more than we need outfielders. I’ll tell you what: we’ll start with Ben Gamel, Andrew Moore, and Brazilian fireballer Thyago Vieira and go from there. How far does that get us?

BB: I find it hard to make this work without Lewis. Gamel, Haniger, and Heredia are each very talented young outfielders, don’t get me wrong. But they each have such glaring weaknesses that it’s hard for me to feel comfortable with any of them as the centerpiece. Haniger is probably my favorite of the bunch.

Nick Neidert and Andrew Moore are about equal to me, and I like both Vieira and Ian Miller. Knowing my interest in those players specifically, if we started with Kyle Lewis, what’s the most in addition to him you’re comfortable offering me? Keep in mind, I could always add a Yonder Alonso or Jed Lowrie or Daniel Coulombe to make things balance out if necessary.

JD: So I’m assuming an offer like Lewis, Moore, Vieira and Ian Miller gets us in the door. But I’m assuming other teams can easily outbid us on that front, and I’m not sure how comfortable I am sacrificing our entire future for Gray.

I understand your disdain for our system, but we simply don’t have the system for a trade like this. Good luck!

BB: Perfectly reasonable, thank you for your time.

This is probably a realistic outcome for trade talks with the Mariners. DiPoto’s trading frenzy has simply left the Mariners’ farm very depleted, and a trade from Sonny Gray would empty it entirely. This is okay, though – there are plenty of suitors still remaining who will be able to pay Oakland’s asking price for Sonny. Stay tuned for more, and let me know what you thought of this first round of negotiations.

Would you have pulled the trigger on the proposed deal (Lewis, Moore, Vieira, Miller) if it had been offered?