Jerry Falwell Jr. Poses With Trump After Predicting ‘Hiroshima And Nagasaki’ For Dems 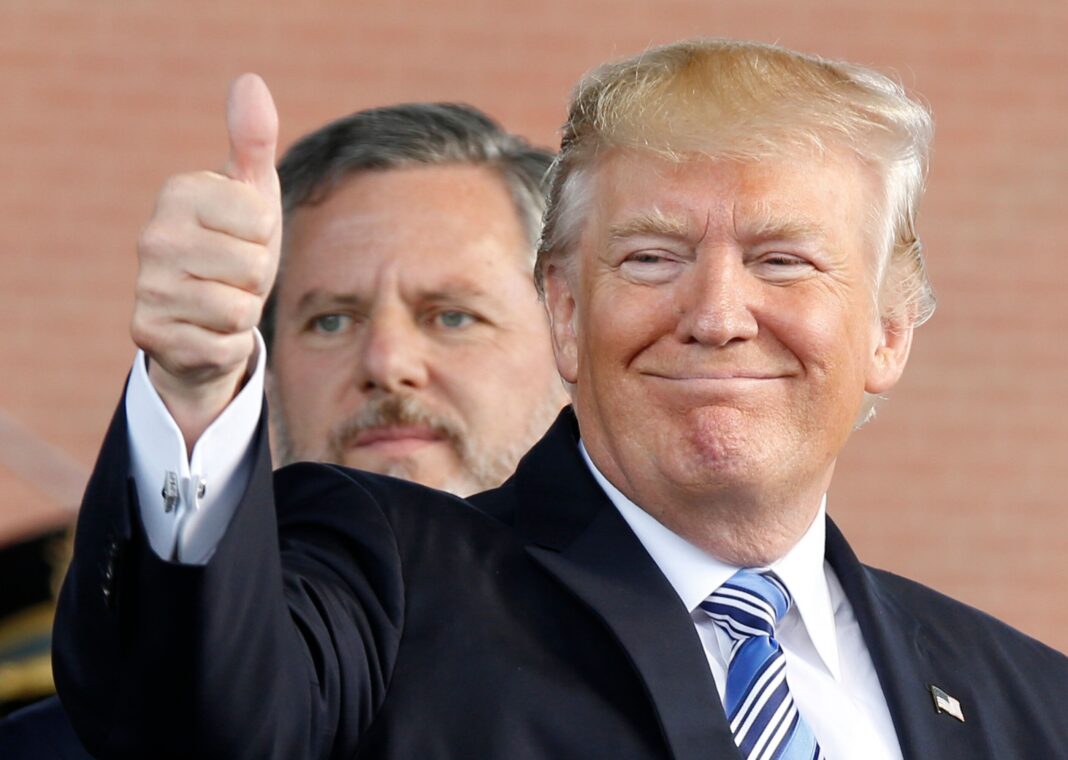 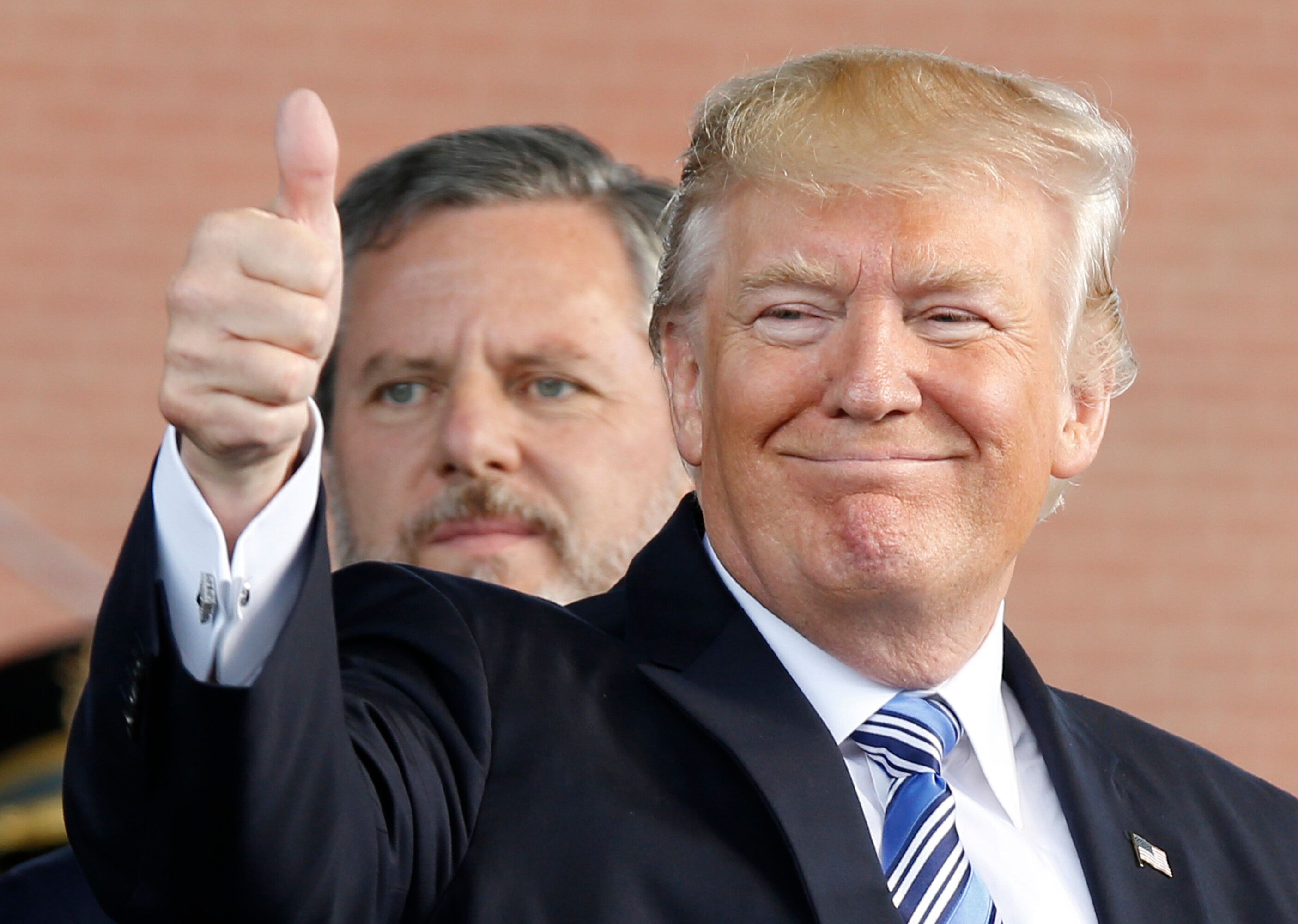 Jerry Falwell Jr. Poses With Trump After Predicting ‘Hiroshima And Nagasaki’ For Dems, Prominent evangelical leader Jerry Falwell Jr. proudly posed for a photo with President Donald Trump Friday at Mar-a-Lago, one day after callously predicting “Hiroshima and Nagasaki” for the Democrats in 2020.

Donald Trump posing with Jerry Falwell Jr. and his family at Mar-a-Lago. On Thursday, Falwell tweeted, “I told the crowd at the Palm Beach GOP Christmas/Hanukkah party tonight that I predict the 2020 election will be Hiroshima and Nagasaki for the Dems!” pic.twitter.com/kmTiV1vO4L

Falwell, who has been dogged by scandal allegations, is one of a crew of evangelical leaders rallying around Trump after a scathing editorial about the president last week in Christianity Today.

The publication, founded by Billy Graham and read by 5 million people, called for Trump’s removal for his “profoundly immoral” abuse of office for personal and political gain. The editorial also lashed Trump’s “blackened moral record,” including “lies and slanders” and “immoral actions in business and his relationship with women, about which he remains proud.”

But if Falwell was attempting to make a point about evangelical morality and backing Trump, he might have thought twice about evoking the horrific World War II attacks that killed some 200,000 and left thousands of others to suffer for life.

The impeachment by the Democrats was their Pearl Harbor. I told the crowd at the Palm Beach GOP Christmas/Hanukkah party tonight that I predict the 2020 election will be Hiroshima and Nagasaki for the Dems! @realDonaldTrump

Several Twitter users were appalled that Falwell flippantly referenced the attacks to make a partisan political point — and some linked their comments to the Christianity Today editorial.

You are a sick man. Over 135,000 people died horrific deaths from the bombings. What’s wrong with you? And you call yourself a Christian… pic.twitter.com/5E9lD7VCXt

Wow, just what Jesus would say. Remember who you are and whom you serve, Jer.

My uncle died at @JointBasePHH on 12/7/41 so you could spew hatred like predicting 100s of thousands of @TheDemocrats will die; either in a flash or slowly and agonizingly from radiation burns. Very ✝️ of you. May the good Lord take the hatred from your heart #ChristianityToday

What a wonderful thought for the holidays.

So do supposed religious men often talk about bombing people?

Suddenly a great company of the heavenly host appeared with the angel, praising God and saying,

“Glory to Trump in the White House,
and nuke the hell outta them libs.”

– the Gospel According to Jerry Falwell, Jr.

Mix it up, dude. Maybe throw in some nerve gas attacks with your war crimes.

We can almost handle the incompetence.
It’s the cruelty we can’t get past.

Those are some violent analogies to use during the season we celebrate the coming of the Prince of Peace.

Jerry, thousands of innocents were murdered in those bombings. Human beings, children of God, whose families mourn to this day. To reduce that to a jab at a political party you don’t like is anti-Christ and violates Imago Dei. If you still claim Christ, then turn away from this.

I’ll pray for ya Jerry! pic.twitter.com/KcgAz7GKI0

You’re an embarrassment to Christians everywhere. Please for goodness sake get off your political partisan high horse, stop endorsing this toxic person, and start loving people (it’s literally the main thing Jesus asked us to do).

Falwell heads Liberty University in Virginia. Associates have complained that he has created a ”culture of fear” at the school, inappropriately discusses his sexuality, has frequented the Miami nightclub scene, and set up financial deals using school funds benefitting family members, Politico reported. One of the deals benefitted a male hotel pool attendant, according to The New York Times. Critics have also complained about his electioneering on Trump’s behalf.

Falwell has denied the allegations and claims the accusations are part of attempted “coup” at the university.