Jail guards scanned him as negative for drugs. He died hours later with fentanyl hidden in his body 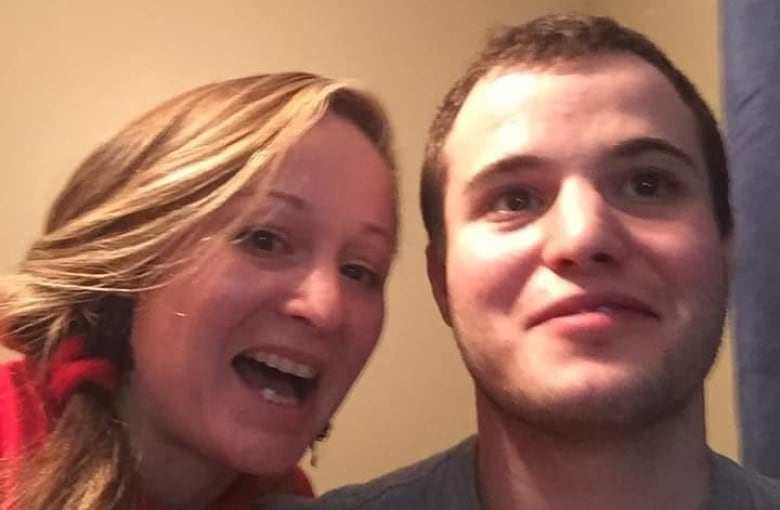 Ever since her son died of a massive fentanyl overdose behind bars, Angela Vos has been kept awake at night by a single question: How did Jordan Sheard get past correctional officers with such a deadly quantity of drugs hidden inside his body?

Now, a post-mortem report into the 26-year-old’s death last June, shared exclusively with CBC News by his family, reveals that before he entered Ontario’s Lindsay jail, Sheard was twice checked for drugs using body scanners — and twice cleared by correctional officers.

But a medical exam after his death would detect what guards didn’t: inside Sheard’s colon was a torn plastic bag containing a soft, purple substance weighing over 26 grams ultimately found to contain fentanyl.

“I feel like Jordan was considered a nobody and nothing because of his mental health disorder,” Vos said. “And then you add substance use onto it. And that’s like two different stigma that he was suffering from.”

The new details in the report prepared by Ontario’s Forensic Pathology Service for the provincial coroner’s office shed new light on Sheard’s final, agonizing hours as the substance made its way through his body — and raise familiar questions about the effectiveness of jail body scanners.

Fentanyl a ‘significant’ contributor to death

According to the report, Sheard died of acute drug toxicity attributed to fentanyl, etizolam (a depressant similar to valium) and possibly a tranquilizer known as flualprazolam.

The concentration of fentanyl in his blood was “extremely high, well above what would be fatal in any circumstance, regardless of tolerance,” the report noted. And while that concentration was likely affected by usual changes in drug distribution through a body after death, fentanyl was nevertheless found to be a “significant” factor in what killed him.

Loyal and loving, Sheard was the kind of son who texted his mother ‘I love you’ everyday, Vos recalled. But, she said, he had his “demons.”

For years, he struggled with post-traumatic stress disorder, depression and on-and-off drug use. Then in late May, after a messy breakup and a family dispute, he grabbed a knife from his father’s kitchen, saying he wanted to kill himself.

After a brief hospital stay, Sheard was taken to the Central East Correctional Centre. He was already out on bail and on house arrest from a previous charge, and his family believed he would be safer in jail under the watchful eye of guards than he would be at home, and decided to revoke his bail.

Instead, on his first night there, Sheard overdosed. Jail staff administered naloxone and he was rushed to a nearby hospital.

He survived and was brought back to the jail. A day later, he was dead.

Not the first time questions raised about scanners

The report indicates Sheard underwent routine body scans for drug detection twice — once on May 30, when he first arrived at the jail, and again on May 31 after returning from hospital.

“Notes indicate that the correctional officer(s) who initially read/interpreted the scans had not identified any abnormality and ‘cleared’ the scans,” the report says.

‘Those monitoring the scans may have difficulty distinguishing foreign objects from human anatomy if not adequately trained.”– Independent Review of Ontario Corrections team, 2018

But reports written “at a later date” suggest a secondary review of the scans by other guards found them “in keeping with this man having concealed drugs within a body cavity, specifically the rectum.”

When or why that secondary review took place, the Ministry of Community Safety and Correctional Services wouldn’t disclose, saying the case will be heading to a coroner’s inquest.

As with any inmate death, it said, the ministry will conduct a mandatory internal investigation to determine whether all policies and procedures were followed.

But Sheard’s case isn’t the first time questions have been raised about the accuracy of body scanners in Ontario’s jail system.

“It’s not as effective as one might hope,” lawyer Kevin Egan told CBC News.

Egan, based in London, Ont., represented the family of Marty Tykoliz during a 2018 inquest into the deaths of eight inmates who overdosed at Ontario’s Hamilton-Wentworth jail between 2012 and 2016.

“I’ve been to a number of inquests where a jury has made recommendations about upgrading the scanning equipment and training the staff. Unfortunately, inquest recommendations don’t have much teeth,” he said. In his view, the province has done little to address the problems.

Ontario first began installing body scanners at its 26 adult jails in 2016, at a cost of $9.5 million, as a way to identify contraband not detected by the then-existing security measures. Metal-detectors, strip-searches and canine units are also used.

But a 2018 independent review of Ontario correctional facilities found that despite the scanning technology, contraband including blades, drugs and phones continued to be smuggled into the system — in part because of the possibility of human error, and in part because not all who enter the facilities are subject to scanning. Correctional officers, for example, are not subject to contraband searches, the ministry said.

“Body scanner technology is not flawless,” the report noted. “For instance, those monitoring the scans may have difficulty distinguishing foreign objects from human anatomy if not adequately trained in interpreting the digital scanner images.”

Ryan Graham is the co-chair of the provincial health and safety committee for the Ontario Public Service Employees Union, the union representing jail guards. He believes the scanning technology can be “a very effective tool” but isn’t “infallible.”

“But it is only as effective as the training of the operator,” he said, noting staff who use the technology regularly develop “a keen eye to detect something that’s out of place, that seems foreign to the body.”

Staff with less experience reading the scans could miss things others might spot, he acknowledged.

That’s why Graham says the union has been pushing for ongoing refresher training — something the ministry has so far not committed to.

It shouldn’t even be called corrections because there’s nothing correctional about it presently.– Kevin Egan, lawyer

In a statement to CBC News, a spokesperson for the ministry said, “Correctional staff authorized to use and operate the whole body x-ray security scanning system receive thorough on-site training.

“Ministry support and resources are available to correctional services staff for any further training or questions about facility operations,” wrote spokesperson Andrew Morrison.

Asked by CBC News for its specific policies around drug detection, the ministry declined to provide them citing “security reasons.”

Graham says the union has also raised the question of whether Ontario jails have enough nursing and healthcare staff, and whether frontline correctional officers need further training on dealing with inmates with mental and drug problems.

Sheard’s mother wonders the same, noting there were a number of red flags that she believes should have alerted jail staff to the fact that he was overdosing again. Despite her son having just returned from hospital following an overdose, being found “bearing down as if trying to push something out” according to the report, and vomiting — no one at the jail seemed to realize what was happening to him.

Instead, with Sheard naked, sweating and yelling, a nurse was called and administered Gravol. About 15 minutes later, he was observed on the floor again, not responding to his name being called, the report notes. A guard kicked at the door and Shear groaned, reportedly making snoring sounds.

“This is a qualified nurse, but she’s not recognizing all of these signs and symptoms of an overdose and gave him Gravol instead?” Vos said.

“Everybody knows that the signs and symptoms of an overdose are snoring or appearing to be snoring.”

It’s an all-too-familiar story for Egan, who noted Tykoliz too had been taken to hospital from jail for an overdose, and was treated and discharged, before he fatally overdosed in 2014.

“We’re spending about $300 a day to warehouse inmates,” Egan said, noting the provincial detention system costs Ontario taxpayers upwards of $800 million per year — money he says could be better spent on rehabilitating inmates.

“If we spent a fraction of that helping the inmate overcome their addictions, giving them the tools, the life skills that they need to to make good decisions … we would see a decrease in incarceration,” he said.  “It shouldn’t even be called corrections because there’s nothing correctional about it presently.”

Searching for comfort in memories as wait continues

For now, Sheard’s mother waits as her son’s case heads to an inquest — a wait that’s likely to go on several months.

If anything positive is to come from Sheard’s death, she says, it’s that people with mental health and substance problems be respected.

“I really think in the future that jail should be a place of sobriety, where they can get that help, get on that treatment,” she said. “It should be an opportunity to get better … rather than, you know, fall back into that overdose crisis.”

In the meantime, she searches for comfort in the memories of Jordan happy and free, snowboarding and skateboarding as he loved to do, and the bond they shared even when he was struggling.

“He was a wild guy on the slopes and on the rails,” Vos recalled, smiling. “He would always say, ‘Mom, I’m going to hit that one.'”

Each time, she’d watch anxiously, hoping he wouldn’t get hurt.

“But he would hit it and I would be so proud.”