‘It felt like home’: Cree baby born in a teepee brings joy to family, community 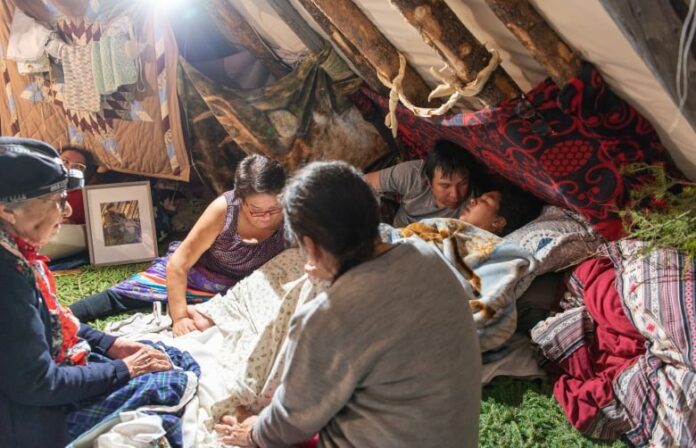 Hannah Bearskin’s dream of giving birth in a teepee in the bush surrounded by family and friends was everything she’d hoped it would be.

“Even with all the pain I was going through, it felt so peaceful. It felt like home,” said the 24-year-old mother of two, from the northern Quebec Cree community of Chisasibi.

Hannah gave birth to her second child, a boy named Koa Murray Siibii Aabuunipinaanuuch Bearskin. Siibii means ‘river’ in Cree and Aabuunipinaanuuch, means ‘fishing out on the ice in the winter.’

Koa was born at 4:34 a.m. on Sept. 22. in a large traditional teepee built about 10 kilometres outside of Chisasibi near the La Grande river. Koa was delivered with the help of 90-year-old elder and former midwife Jane Matthew, who is like a great grandmother to Hannah.

Hannah wanted to give birth in a traditional way because the old ways are being lost.

“There aren’t a lot of people who know. We’re losing our traditional skills … especially midwives,” said Hannah, adding elder Jane is the sister of Hannah’s late great grandmother, Martha Pachano, who passed away just days before Koa was born.

Jane, and her mother before her, delivered many, many babies as midwives before birthing was removed from the Cree communities and women were sent to southern hospitals to have their babies.

Since 2004, the Cree Board of the Health and Social Services of James Bay (CBHSSJB) has been making efforts to return birthing to the territory. Between 2019 and 2021, more than 57 Cree babies were born on the territory with the help of midwives. The Cree health board is also creating an in-territory program to train Cree midwives. Hannah’s midwife, from the Chisasibi midwifery services, was also there for Koa’s birth.

Elder Jane shared wisdom on where to place the birthing bed — on the right side, close to the entrance of the teepee. That is where the woman used to lay when she was ready to give birth, said Jane.

She also bought items used in the past, such as dried moss. Moss was also used to make her birthing bed more comfortable. Rabbit skin protected the flooring of spruce boughs. Tied to the teepee polls was a twisted length of moosehide, which Hannah was able to hold onto during labour.

Elder Jane wore a tartan skirt, moccasins and a floral shirt that belonged to her late mother, Mina Bearskin Tapiatic, who also wore it as a midwife.

“When she came she looked very nice,” said Hannah in Cree, adding Jane shared that when her mother would attend a birth, Mina would always wash herself and put on clean clothes.

Hannah and her partner, Wesley Bearskin, and more than a dozen other family members and friends helped build the large teepee and helped prepare meals. Children, elders and community members visited to show their support and wish the young parents well.

The parents-to-be and family and friends lived in the teepee for two weeks waiting for the birth, according to Hannah’s mom, Rose Duff.

“Everyone was happy to be there … I couldn’t help but think how happy people must’ve been when they lived in teepees long ago. We had visitors everyday and we cooked traditional meals,” said Duff through Facebook messenger.

“It was the most amazing experience to see one of my grandchildren come into this world like it used to be done long ago,” she added.

There were daily things to do, such as fetching water, collecting boughs, gathering firewood and cooking food, according to Hannah. Once labour started, Koa was born healthy after three hours.

The story of Koa’s birth is in sharp contrast to the birth of his older brother, Hannah’s first child. It was a time before birthing options were available in the Cree communities and Hannah was sent out of the community to a hospital in Val d’Or.

“But at the teepee, you could feel the fresh air coming in from the outside. You could hear the wind blowing. In the distance, I could hear thunder.”

Hannah’s grandmother, the late Elsie Duff, passed away in January and was another part of Hannah’s desire to give birth in a traditional way, because Elsie loved being out on the land.

“I miss her so much, I wanted her to be there but, I knew she was there, this is what motivated me, I was constantly thinking about her, I had a lot of doubts thinking I won’t be able to do it,” she said, adding the love she felt in the teepee gave her the strength she needed.

After Koa’s birth, Hannah and her husband and the baby spent another night at the teepee.

Now, the young mother misses the traditional setting and encourages other young Cree mothers-to-be to choose a more traditional way to give birth.

“I would like to see more young women having their babies in this way,” she said. “We have lost a lot of our traditions, this is one of the reasons why I wanted to do this.”