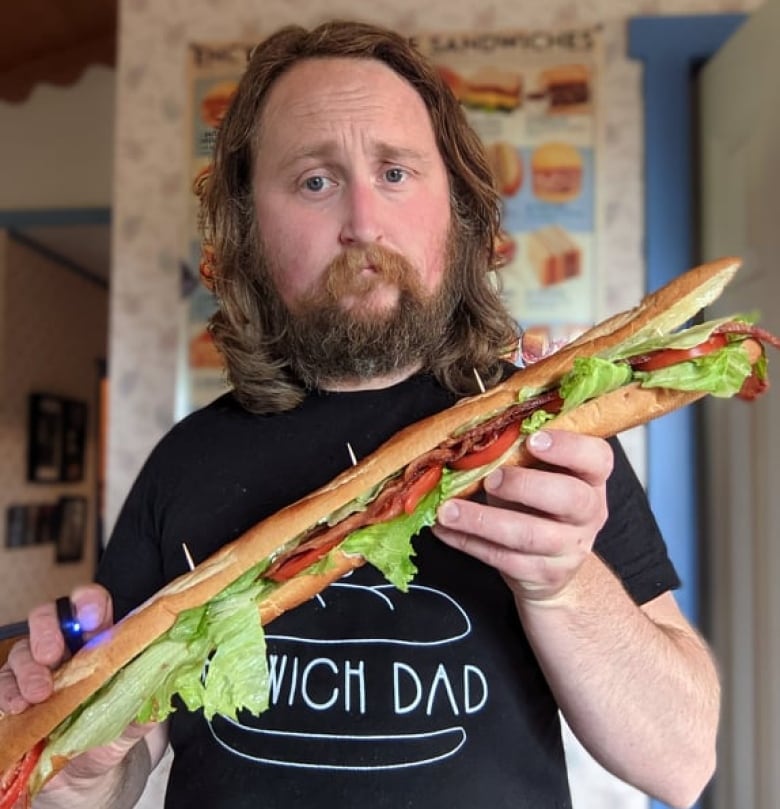 A year ago, Jonathan Ostrander was still a bit baffled by TikTok.

“I couldn’t figure out how to use it. You know, I’m a ‘geriatric millennial,'” he said.

Now, the stay-at-home Yukon dad has got a legion of followers on the video-sharing site, and a line of merchandise emblazoned with his moustached face or his online handle — “Sandwich Dad.”

“Basically what I do is I make sandwiches and narrate making sandwiches,” he said. “That’s pretty much the long and short of it.”

Ostrander is just one of many Yukoners who are using TikTok to find big audiences hungry for … sandwiches, sure, but also for other short and colourful glimpses into life the North.

Joey O’Neil is a singer-songwriter who lives in an off-grid cabin near Dawson City, and she initially joined TikTok to share her songs.

“I heard that if you’re a musician or you want to be, you should probably be playing music on it since it’s so sound based,” O’Neil said.

She started posting videos of herself performing songs at home, but she’d also post videos that just showed off her rustic lifestyle. It was the lifestyle videos that seemed to grab more people.

“I just got such good response from the cabin-video stuff that I really put the music on the back burner. I will do like a performance every few videos, just to remind people that I am a musician,” she said.

“I think especially during the pandemic, when so many people were just stuck in cities and just wanted that escapism to like some place with space and greenery … I think it was like a real breath of fresh air for them,” she said.

Ostrander is a little bit more mystified by the popularity of Sandwich Dad. His 33-second video of assembling a peanut butter-and-pickle sandwich has topped 134,000 views.

“I get told that I have, you know, a very wholesome and calm way of putting together a sandwich, I guess,” he said.

“I don’t know exactly why [people are interested], but I’m certainly glad for it. I think that maybe sandwiches are just occasionally on trend, maybe — I’m not sure,” he said.

Another Yukoner has been using TikTok to share another view of life in the territory, from an Indigenous perspective — and she’s just been accepted into a new program designed to help Indigenous creators grow their influence on TikTok.

Jocelyn Joe-Strack — “auntyjocey” — is the Research Chair in Indigenous Knowledge at Yukon University. She posts videos in which she shares science and traditional knowledge, reflects on her environment, and explores what it means to be an Indigenous woman in 2021.

“It’s pretty fun. I just make little short things. So like yesterday, I made one about breathing with a tree, just for a moment of presence,” Joe-Strack said.

“It is trying to make people feel good and calm and show them a bit of the beautiful Yukon.”

This week, Joe-Strack was announced as one of 30 Canadians accepted to the new Accelerator for Indigenous Creators program, a partnership between Tik Tok and the National Screen Institute (other Northerners include Christina King of Tuktoyaktuk, N.W.T., and Lori Ann Tulugak-Kopak of Naujaat, Nunavut). It’s an online training program meant to “empower storytellers to grow their TikTok presence,” according to the program’s website.

“It’s pretty exciting because there’s a whole community of Indigenous creators, and so they’ve got some of the pretty prominent people on there,” Joe-Strack said.

“They’re going to teach us things like lighting and how to work with the platform itself, but also how to, I think, connect with the community at large.”

‘Something silly that young people did’

Joe-Strack also admits that she started out, not that long ago, as a bit of a TikTok sceptic. She thought of it as “something silly that young people did.”

Then she started exploring, and finding content from other Indigenous creators in Canada and beyond. Now she has a whole network of friend contacts.

“We share our stories with each other, and yeah — it’s just really rewarding and hopeful and inspiring.”

“Here, it’s video. And so you can include things like inflection of your voice or your hand movements. It feels a lot more natural,” she said.

Ostrander and O’Neil also describe TikTok as a more “authentic” experience compared to other social media platforms. They also describe it as a more positive online community, with fewer trolls seeming to haunt the comment sections.

O’Neil says she’ll occasionally have people try to correct her wood-chopping technique, or caution her about the creek water she’s been safely drinking for years, but overall, “people are kind.”

“I don’t know if it’s maybe because I’m like feminine-presenting, or just, you know, like alone in the woods,” O’Neil said.

Ostrander says Sandwich Dad has also helped him connect with other food-related creators around the world, including another TikToker who recreates sandwiches from history.

“It does feel like you’re a lot more connected,” Ostrander said.

“Especially after the pandemic, especially as someone who’s a dad who hasn’t left his house in, it feels like three years!”