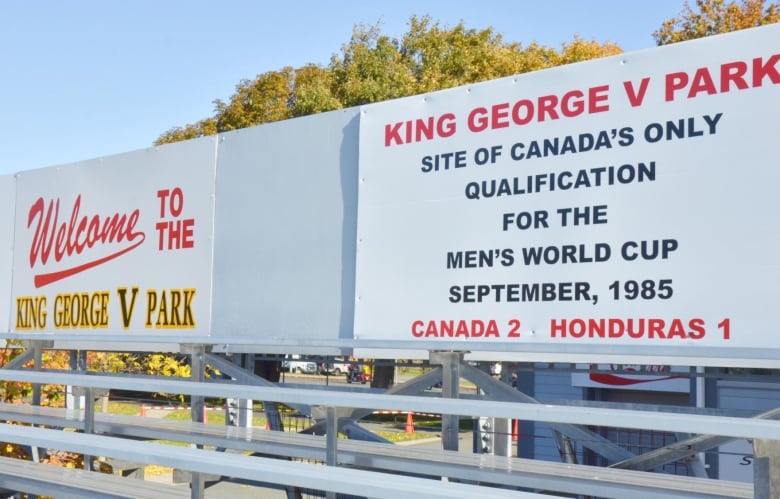 With the Canadian men’s national team on the verge of qualifying for the FIFA World Cup for the first time since 1986, a fan who was at the last qualifying match in Newfoundland and Labrador believes it’s time to celebrate a piece of soccer history he’s kept safe since then.

Up until just a few weeks ago, Faron Penney of Mount Pearl, N.L., was the owner of the initial game ball used in Canada’s first — and last — World Cup qualifying victory, a hell of a souvenir from a game played on a damp day in St. John’s in September 1985.

Penney, who was 23 at the time, picked up the ball during the Canada-Honduras qualifying match. The stakes were high: each country was one step away from earning a ticket to the big stage — the 1986 World Cup in Mexico.

Penney and his friends walked through the streets of St. John’s to the match, finding a party-like atmosphere in what would become one of Canada’s most historic soccer moments.

“It was huge. I wish I wasn’t so young at the time and ignorant to the facts,” said Penney, recalling the scene as Canadian fans poured into King George V Park on the banks of Quidi Vidi Lake, in St. John’s east end.

Taking his seat on the south-side bleachers, roughly five rows up from the pitch, Penney said he settled in to watch a shivering Honduras club take on Canada, who at that point had been in search of a qualifying bid for 28 years. With each challenge for the ball, roars from fans in the stands flooded the park.

Early in the match, the first game ball was launched out of play, over the heads of fans, Penney included. It landed in nearby Rennie’s River, which trickles parallel with the pitch before entering Quidi Vidi Lake.

Fans gave chase and Penney was the first to find the ball, tangled in tall reeds on the far side of the river.

“I remember going through the stands and standing at the edge of the water,” he recalled. “I was skeptical at first because I knew the water was at least up to my waist and … maybe 15 feet wide.” And it was September, so it was chilly, too.

Still, Penney made his way across the river, wrapped his arms around the ball and crossed back, scrambling under the bleachers and climbing out the other side. By the time he returned to his seat, a substitute ball was in play and he had to “watch the rest of the game soaking wet.”

Since no one asked for the ball back, Penney kept it, wrapping it in his wet T-shirt when he left so it would be as inconspicuous as possible.

With the Canadian men’s national team on the verge of qualifying for the FIFA World Cup for the first time since 1986, Faron Penney of Mount Pearl, N.L., believes it’s time to send a piece of history home. 4:20

View from the sidelines

Paul Dolan, one of two goalkeepers for Canada at the time, told CBC he remembers that 1985 game well — he was the backup keeper during the team’s 2-1 win, and would later see action in the 1986 World Cup against France. Canada ultimately lost all three of its World Cup matches — 2-0 against the USSR, 2-0 against Hungary and 1-0 against France.

Still, the support from fans during the qualifier was unforgettable.

“The atmosphere was incredible. It was the best home support you could ask for,” said Dolan, who has since had a long history with Canada Soccer.

“Everyone just stormed the pitch. All the fans ran out onto the field [and] we jumped up off the bench.”

Dolan said choosing St. John’s as the location for the match was a peculiar but tactical decision that then coach Tony Waiters made to get the Honduran team away from the heat they were accustomed to in Central America.

“The weather on the day was perfect because it wasn’t nice and warm. It was overcast and a bit rainy,” he recalled. “The Hondurans were wearing gloves and they thought it was freezing.”

The subject? The game ball.

New life for an old ball

The World Cup qualifying ball, in Penney’s possession for all these years, still saw plenty of use as he often kicked it around the yard with his three kids.

A few years ago, Penney said he finally realized the ball’s value after listening to an interview with the late Dee Murphy, a well-known St. John’s sports broadcaster and writer who related his favourite local sports memories, including the Canada-Honduras match.

“I just about came out of my chair, because I realized that I had the game ball,” Penney said.

The ball had been tucked away in storage after his children moved away, but when he realized what he had, he built a custom case to house what he considered his trophy, complete with lighting.

He displayed it in his garage, where he spends time working on projects or relaxing with friends.

But with Canada once again on the verge of World Cup qualification, Penney decided he wanted the ball to serve as an inspiration and reached out to Soccer Canada. They sent him to Dolan, who suggested the best fit might be the Canada Soccer Hall of Fame in Ottawa.

So in late October, Penney delicately packaged the ball and prepared to ship it to Ontario where it will live in the hall of fame, with his name as the donor.

In return, Canada Soccer offered to send Penney two autographed jerseys from current team members, and he’s hoping to get a signed ball for his now empty custom case.

“I’ve enjoyed that ball now for a long, long time, and I think it’s time for the rest of the world to see it,” Penney said.

“If we can get this ball in the hands of the team and they can pass it around and use it as inspiration to take them to the next level, that’s what I’m looking for.”

Penney said he’s excited about Canada’s upcoming qualifying matches in Edmonton’s Commonwealth Stadium where they play Costa Rica on Nov. 12 and Mexico on Nov. 16. The club has eight qualifying matches remaining, with the final one scheduled for March 30, 2022 against Panama.

Canada is currently in third place in the Confederation of North, Central America and Caribbean Association Football (CONCACAF) standings behind Mexico and the U.S. The top three teams automatically qualify for the 2022 World Cup in Qatar, which begins Nov. 21, 2022.