In Syria Russia says kills 180 jihadists, mercenaries Some 120 Islamic State fighters and 60 foreign mercenaries were killed in a series of Russian air strikes in Syria over the past 24 hours, the defence ministry in Moscow said on Saturday. 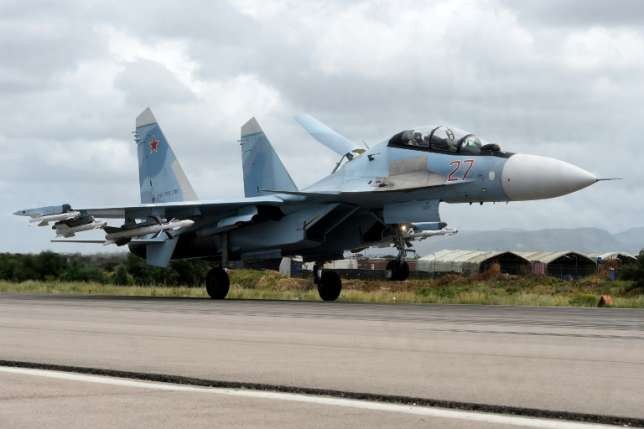 Some 120 Islamic State fighters and 60 foreign mercenaries were killed in a series of Russian air strikes in Syria over the past 24 hours, the defence ministry in Moscow said on Saturday.

Puzzlingly, the ministry also said three senior IS commanders including Omar al-Shishani had been confirmed dead as a result of an earlier Russian strike.

Moscow reported al-Shishani’s death despite the fact that the Pentagon said in 2016 the notorious fighter had been killed by American troops in Iraq.

“A command post of the terrorists and up to 80 (IS) fighters including nine natives of the Northern Caucasus were destroyed in the area of Mayadeen,” the ministry said, adding that another 40 IS fighters were killed around the town of Albu Kamal.

Mayadeen is one of the Islamic State group’s last bastions in Syria.

In another air strike, more than 60 foreign mercenaries from the former Soviet Union, Tunisia, and Egypt were killed in the Euphrates Valley south of Deir Ezzor.

The ministry said “large numbers of foreign mercenaries” were coming into the Syrian border town of Albu Kamal from Iraq.

Moscow reported their deaths after taking “several days” to confirm the results of an earlier strike on the northern outskirts of Albu Kamal which destroyed an IS command post with more than 30 fighters including the natives of the Northern Caucasus.

The Pentagon announced in March 2016 that American forces had killed Shishani, one of the most notorious faces of IS known for his thick red beard.

He later resurfaced in northern Syria as the commander of a group of foreign fighters and became a senior leader within IS.

The Russian defence ministry was not immediately available for further comment.

playIn early 2014 the self-styled Islamic State entered the northern Syrian city of Raqqa, declaring it their capital and beginning a reign of terror marked by grisly public executions

“Salah al-Din al-Shishani is still alive and is somewhere in the regions controlled by jihadist groups in the west of Aleppo province. He is a famous commander, and his jihadist group is allied with the jihadists of the Al-Nusra front but only in their fight against the regime,” he said.

The advances against IS in Deir Ezzor have resulted in a heavy civilian death toll through Russian and coalition air raids.

The Observatory said Russian air strikes on Thursday night killed 14 people, including three children, fleeing across the Euphrates on rafts near Mayadeen.

Since it intervened in Syria in 2015, Russia has not acknowledged any civilian deaths from its strikes, and it dismisses the Observatory’s reporting as biased.

Moscow has been staging air strikes in support of its ally Damascus targeting both IS in Deir Ezzor province and rival jihadists led by Al-Qaeda’s former Syria affiliate in Idlib province in the northwest.